LOU BERNARD Special to The Express 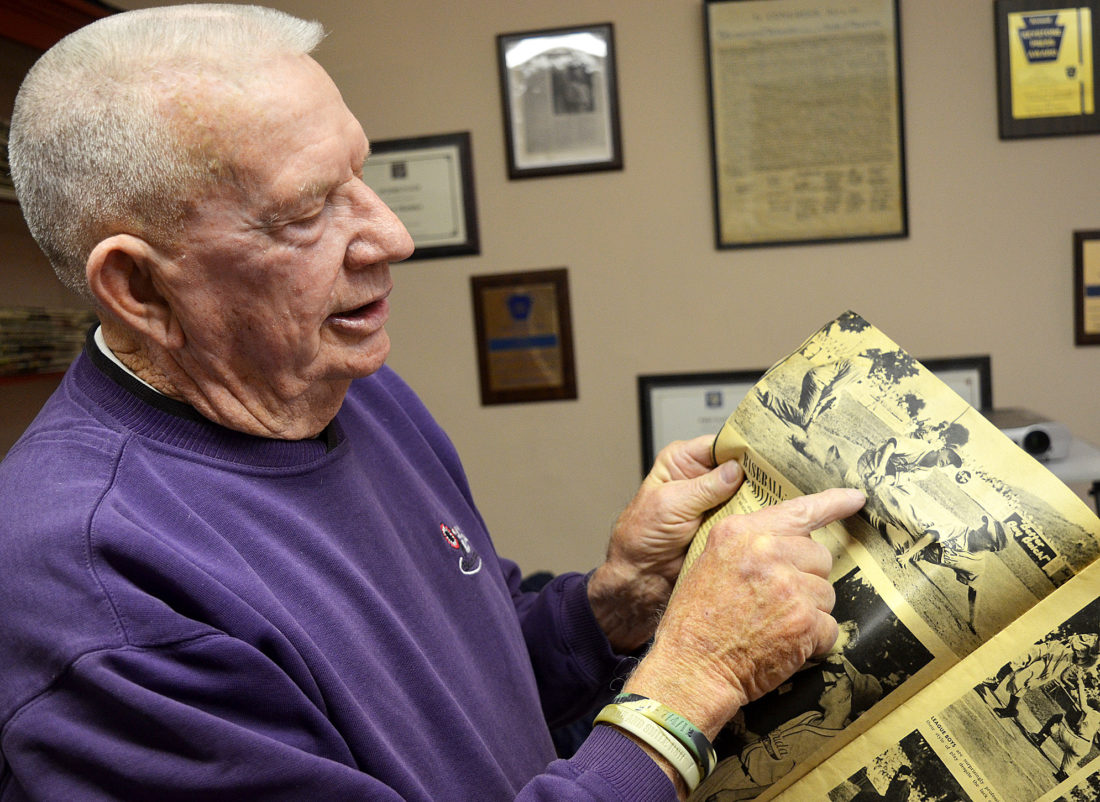 SARAH SMELTZ/THE EXPRESS Above, John Heckman a member of the 1948 team, points to a photograph of the team’s championship game, which was enlarged and covers a wall at the Little League Museum in South Williamsport.

The thrill of watching the game.

Something about baseball excites us in this country, thrills and unites us as nothing else can.

As the World Series happens, people will watch. The excitement will build. Millions of people will watch at home on TV, and thousands will buy tickets and attend. Advertisers will spend millions to market their products. 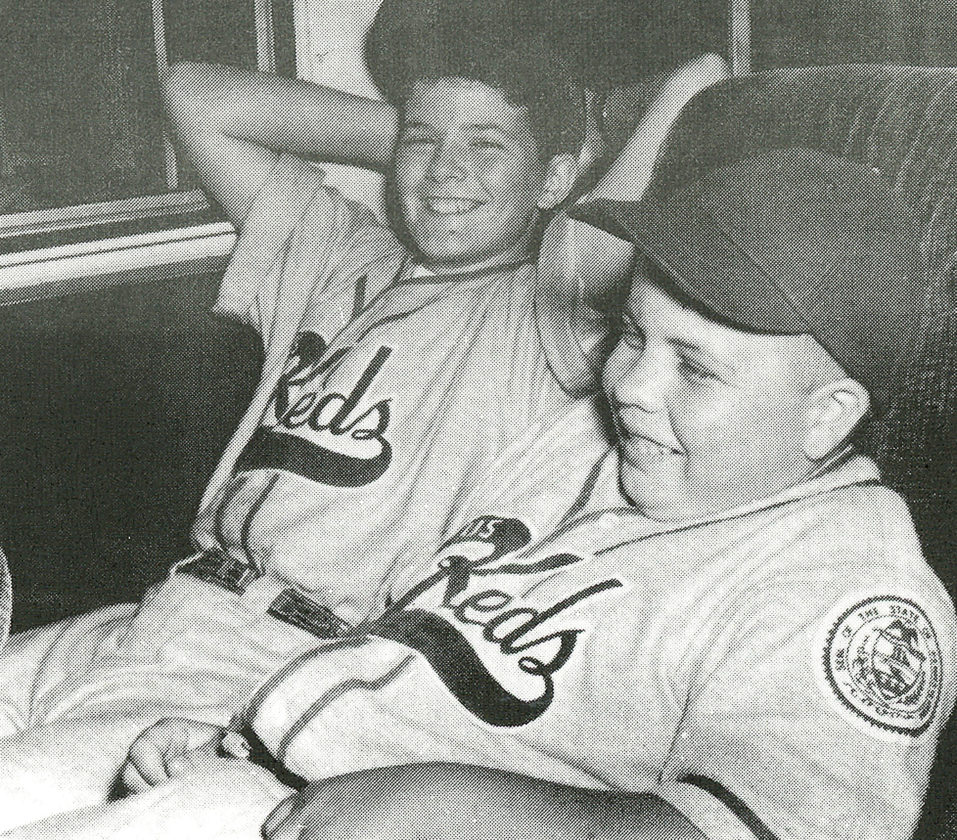 Larry Lytle and “Boom Boom” Pletcher are ready for the bus ride to the game.

Baseball is referred to as our national pastime for a reason.

Our society enjoys it, feels the thrill of it. It excites us the way very little else does.

The sport permeates our pastime, right down to the local level.

Little League Baseball was created in Williamsport in 1939.

And while the baseball fields are all closed and probably frozen over by now, locals can always think back to the time Lock Haven won it all .. 70 years ago. 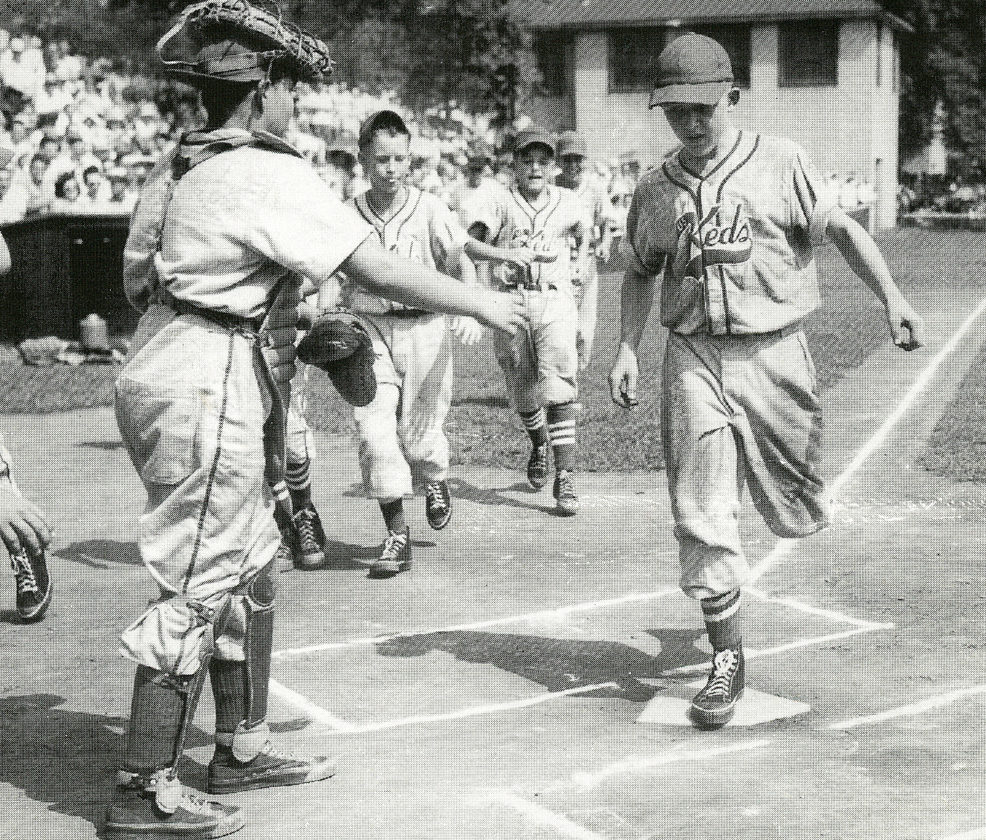 THE ROAD TO VICTORY

It was the summer of 1948, and Lock Haven had four Little League Baseball teams sponsored by the Loyal Order of Moose, the VFW, the Elks Lodge, and the Sons of Italy.

The all star team had four coaches gathered from each of the four local teams.

John Cebulka represented the Moose, Jack Poole the VFW, Harry German the Elks, and Ralph Condor from the Sons of Italy team.

They began in August, meeting at the Elks Club on Main Street. The four managers discussed who they thought were the best players and wound up choosing 14 boys. 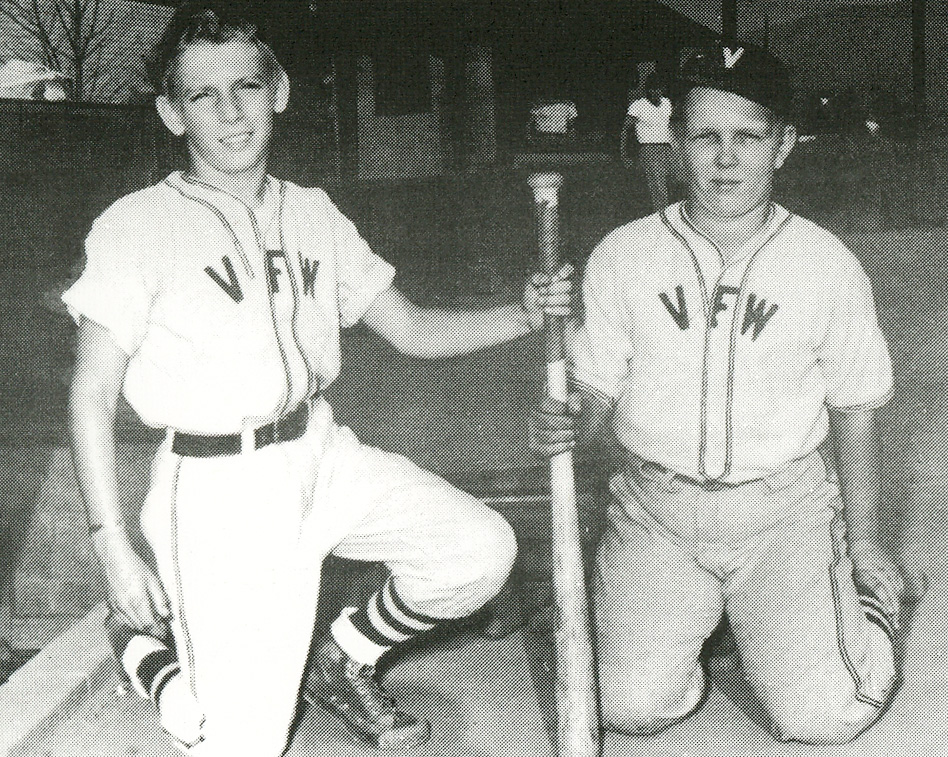 Bob Wise and Dave Bowes played for VFW before making the All-Stars.

The all stars subsequently beat their counterparts from Mill Hall and Jersey Shore on the district level, before heading to the state tournament.

The Express ran a special edition about the win on Oct. 12, 1948, with the headline, “Road To Title Marked By Thrills In 10-Game Drive.”

At the state tournament, the local boys beat Mount Carmel, Harrisburg, and Loyalsock.

Five days after that, they moved on to the national level. 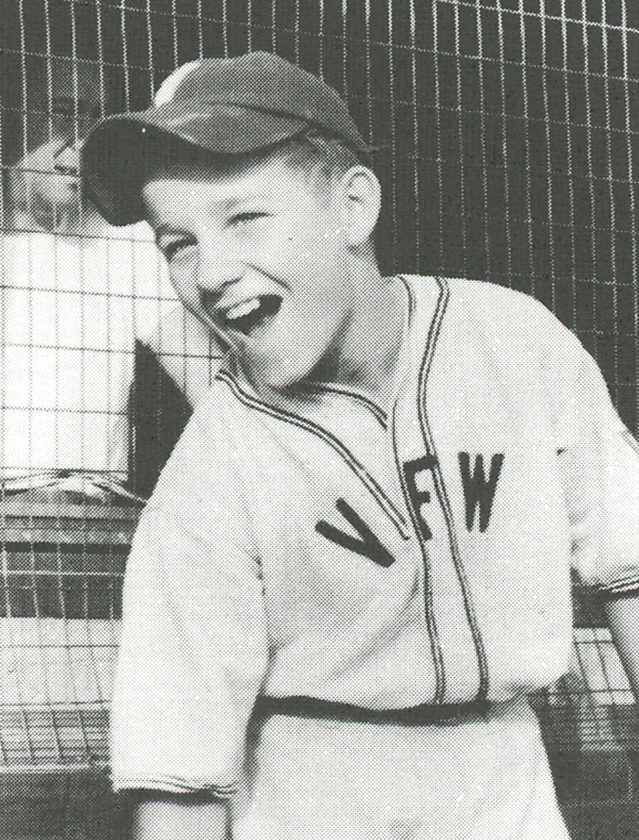 Gary Kelly, the winning pitcher in the title game.

The team spent considerable time in Williamsport during this time, and all returned with some good memories. Later, they talked openly of the time they’d spent there. They ate at the Lycoming Hotel, happily used the swimming pool at the Williamsport YMCA, and visited several places for meals.

One newspaper article reported that they’d eaten 102 sandwiches after one game.

They had their enjoyable moments and also their rituals. One of these was “kissing the stick,” which they did before each game for good luck.

The stick was a short piece of wood — “maybe a discarded chair rung,” Larry Lytle said in an interview later. The wooden rung was something carried with them and took to every game for good luck. Just before each game, they would pass it around, and each of the boys took a turn kissing it.

On Williamsport’s “Original” Little League field at Memorial Park near Lycoming Creek, the boys went up against Alexandria, Virginia, and won 12-1. After that, it was Loyalsock for the second time, and a much closer game. Lock Haven won, but it was 1-0. 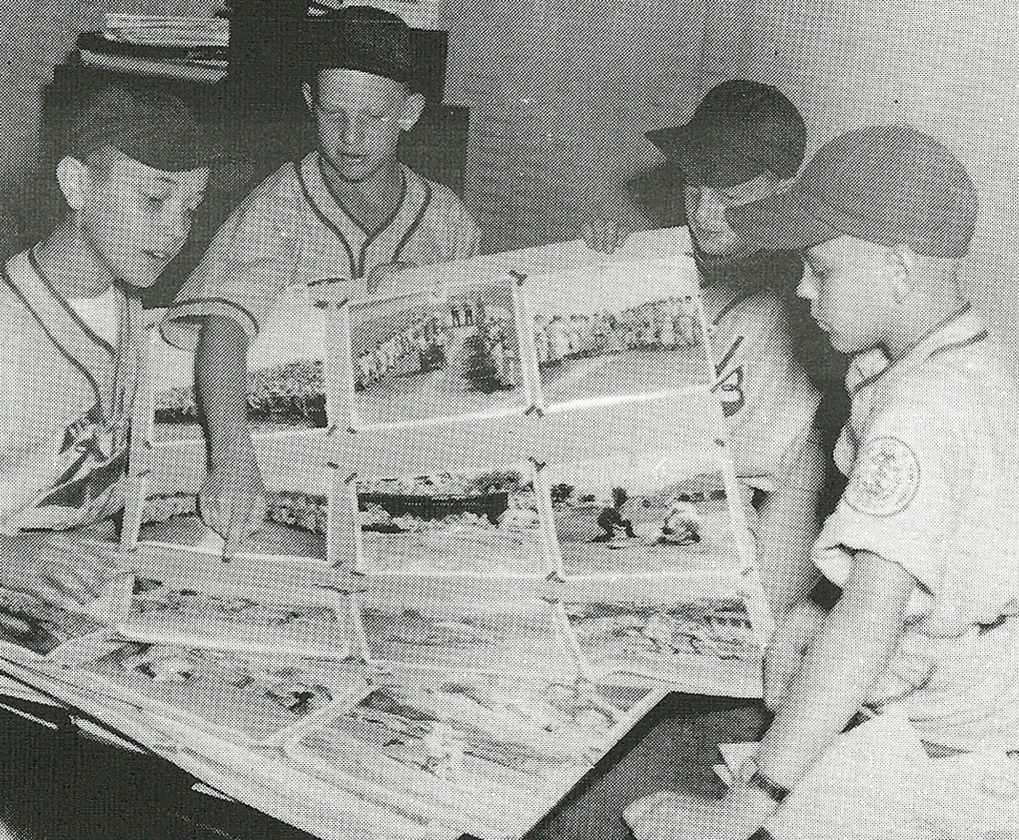 The next evening was Saturday, Aug. 28.

It was the night the Lock Haven boys won the United States title by beating St. Petersburg, Florida.

Cardamone remembered “great numbers” of people traveling to the games, particularly the final one. It was during that game that Cardamone himself developed a reputation for good sportsmanship, by shaking the hand of one of his rivals after the Florida player hit a home run. As the other player crossed the plate, Cardamone extended his hand for a congratulatory shake. This placed him on the cover of Life Magazine soon after.

“With Lock Haven ahead, 6-3, Johnny Heckman banged one to third base and the Floridian on that sack erred, allowing Wise to tally Lock Haven’s sixth and final marker,” the Express reported. “Florida came back to push across single runs in the fifth and sixth frames and in the last of the sixth. Pitcher Kelly was in dire straits with two out, the trying and winning runs on base and home run-hitting Don Eberle at bat.”

Eberle, who had already scored two of the runs that game, faced down Gary Kelly on the mound. Kelly, who arguably was the deciding factor of the game, was known for staying calm when things got tense. The newspapers referred to him as the “never-say-die” pitcher, and once called him “as cool as a cucumber posing as the North Pole.” He was nicknamed “Kool Kelly” and “Cold-Water Kelly”, and he had a habit of often chewing gum on the field.

He was chewing when he pitched in the final moments of the game.

It’s a cliche to say that a hush fell over the crowd, but that’s what happened. Everyone sat, tense, as Kelly threw the final pitch of the game.

It was a strike.

“It was all over,” the Express said. “Kool Kelly never batted an eye when the chips were down. And in the tense last inning, Eberle never batted the ball. The stand, then the field itself, because a madhouse. Lock Haven had won the United States Championship, the world’s championship.”

After that, the boys returned home to prizes and accolades.

The boys were given trophies, bicycles, and wristwatches as prizes, as well as several local businesses contributing smaller prizes and awards of their own.

There was a parade down Main Street, enormously attended, with a huge crowd of Lock Haven local cheering the boys as they rode down the street. League President Angelo Dicello rode with them, holding up one of the trophies. In the front seat Mayor Charles Herr rode with them, grinning widely at the gathered crowd.

The attention would last months, and linger for years.

The game happened in August. Months later, people were still talking about it and congratulating the boys. In October, the Express published a special edition in which they congratulated the boys, ran photos, interviewed Gary Kelly, and recapped the events leading up to the great day.

Half a century later, on April 4, 1998, the Clinton County Chapter of the Pennsylvania Sports Hall of Fame held a dinner banquet to celebrate the fiftieth anniversary of the event.

Buddy Beers, who later grew up to be the Lock Haven City Treasurer, remembered it fondly in the decades-later interview from the booklet written for that night.

“Notwithstanding being treated like royalty, the banquets, the parades, the gifts, the medals and the trophies,” he said,” The most memorable thing has to be the camaraderie we had.”

MEMORIES OF THE PLAYERS

The boys who won the big game grew up, of course. They went on to lead full lives, and some of them have passed away by now. Larry Lytle, David Bowes, Boyd Heckman, Charles Schiavo, Jackie Baker, and Cambridge Beers, have all passed on.

Other members of the team are still alive and active, however. John Heckman is still living in Lock Haven, and Joe Cardamone resides in Maryland.

“It was great, that’s all I remember,” commented Cardamone in a telephone interview. “One of those things you never forget.”

“There’s only about half of us left now,” Heckman mused during an interview. “I’m eighty-three. We were lucky to win. Six to five against Florida….We were really lucky. I still have the trophy they gave us, two medals, and a watch. I just had that restored.”

The team was given many prizes and perks for their win. “In 1948, none of us had bikes,” said Heckman. “They gave us each a bike. Plus the trophies, the watches….We’d go into a place in Lock Haven, and they’d give us free hamburgers and cokes.”

“There were considerable rewards,” Cardamone said, a clear smile in his voice. “We were really appreciated by Lock Haven, and we appreciated the treatment.”

A banquet was held for the team at the Masonic Temple, on the corner of Main and Grove Streets. The team went and ate. Food is one of the biggest memories from the event, according to Heckman.

“They’d take us down,” he said. “There were about six teams, and we’d travel there. After the game, we’d stop at the YWCA and go swimming, then at Brown’s Barbecue, and eat. It’s what I enjoyed most.”

Remnants of the game are still around. In addition to the personal items Heckman has kept, there are plenty of artifacts at the Little League Museum in Williamsport. According to Heckman, there is a wall full of photos, and he and Bobby Wise are pictured right in the middle, making a play during the big game.

“There were blue and red uniforms,” he said. “Ours were blue. Keds, the sneaker company, bought them for us just for that tournament.”

Joseph Cardamone had been pictured on the cover of Life Magazine for shaking hands with the opposing team.

“It was just an instinct, I guess,” Cardamone admitted. After the Florida player hit a home run, he extended his hand and shook, earning himself a reputation for good sportsmanship.

“Bobby Wise and I didn’t care for that,” laughed Heckman. “But there was another magazine, Night And Day, kind of a risque magazine for the time. We were in there, that same picture from the museum.” Heckman still has a copy of the magazine.

Heckman remembers fondly the appreciative, generous attitude that the community displayed after the big win.

“Couldn’t have been in a better city for it,” agreed Cardamone. “Lock Haven was great.”