Wayne Township up in arms over decision to prohibit fishing pond

Barry Williams talks to a friend on his smartphone as he wades through storm surge from Lake Pontchartrain on Lakeshore Drive in Mandeville, La., as Hurricane Barry approaches Saturday, July 13, 2019. After briefly becoming a Category 1 hurricane, the system quickly weakened to a tropical storm as it made landfall near Intracoastal City, Louisiana, about 160 miles (257km) west of New Orleans, with its winds falling to 70 mph (112km), the National Hurricane Center said. (AP Photo/Matthew Hinton)

Screens in Times Square are black during a power outage, Saturday, July 13, 2019, in New York. Authorities were scrambling to restore electricity to Manhattan following a power outage that knocked out Times Square’s towering electronic screens and darkened marquees in the theater district and left businesses without electricity, elevators stuck and subway cars stalled. (AP Photo/Michael Owens)

French Alpha jets of the Patrouille de France spray lines of smoke in the colors of the French flag over the Champs-Elysees avenue during the Bastille Day parade in Paris, France, Sunday, July 14, 2019. (AP Photo/Michel Euler)

LAURA JAMESON/THE EXPRESS A sign “Fishing Permitted” is displayed near the deck overlooking the fishing pond.

LAURA JAMESON/THE EXPRESS A large number of fish are easily seen in the fishing pond.

LAURA JAMESON/THE EXPRESS A sign “Fishing Permitted” is displayed near the deck overlooking the fishing pond.

McELHATTAN — The Wayne Township Recreation Board is angry by recent news that the Northcentral Fish and Boat Commission has decided that the fishing pond for children and handicapped people in Nature Park is not allowed.

And they want to know why.

They’re urging township residents and others to join them at 11:30 a.m. tomorrow at the park to hopefully get their questions answered by Jake Wenrich, a representative of the Clinton County Conservation District.

The pond has received a permit for the pond and a dock since 2016 and now that permit application has been rejected, said Jane White, secretary-treasurer of the recreation board, who said she was informed of the news from township supervisor Dave Calhoun last week.

Calhoun said he got a telephone call from Wenrich last Thursday, informing him that this year’s permit application has been rejected and the pond is not allowed. 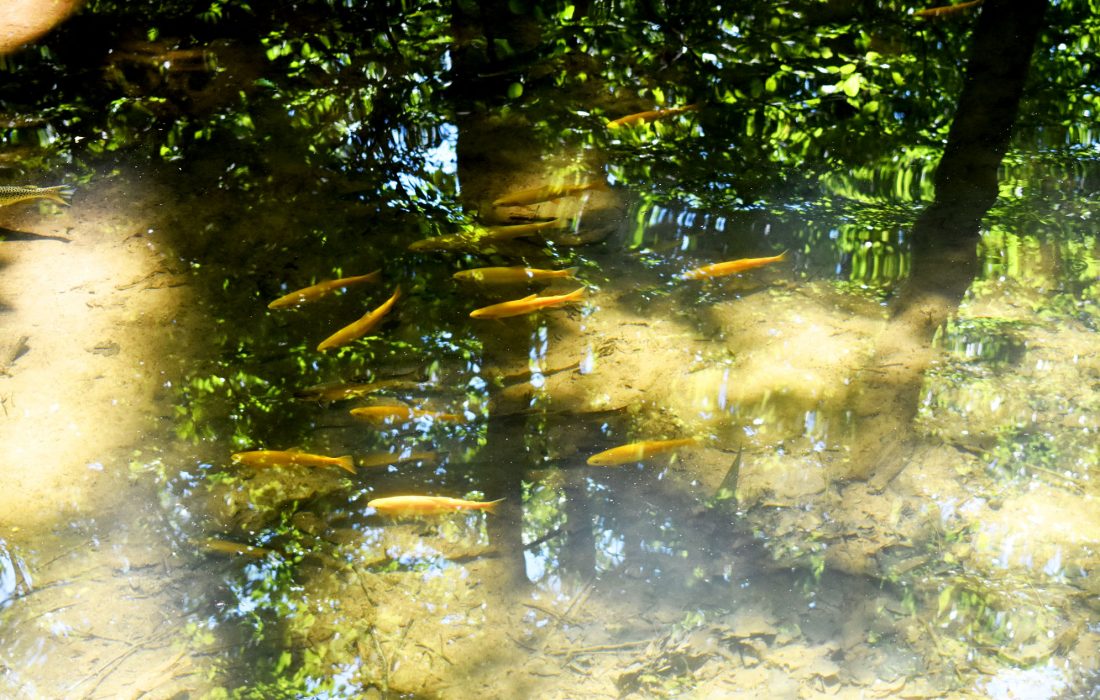 LAURA JAMESON/THE EXPRESS A large number of fish are easily seen in the fishing pond.

“He told me the pond was in violation… that a clean stream is not allowed to be dammed up. But, that pond is not on the main stream. The overflow channel (pond) is off the main stream,” Calhoun said emphatically, frustration in his voice as he talked about the joy that the pond has brought to the community.

“It was Ok a couple of years ago. Why not now?” Calhoun asked.

The recreation board, along with township supervisors worked with Clinton County engineer Greg Smith to build the viewing deck along the tributary of McElhattan Creek to allow children and handicapped folks to fish in the pond, which has been there for a long time, Calhoun said.

“Volunteers from the township met with the Conservation District in State College to apply for a permit to allow for a fishing for kids under 12 and disabled individuals. This is a catch and release pond. Permits were granted for years 2017 and 2018 running from April 15 to June 15 from the Fish & Boat Commission. These permits were for a 60-day window,” White said.

Calhoun said he remembers well the work that was put into getting the proper permits and make sure everything was in order.

“They gave us the permits every year. We never heard of any problems, until now,” he said.

“It’s wonderful to see the little kids out there fishing in the spring. The recreation board has kept the pond stocked — mostly rainbow trout and palominos — and also keeps food there to feed the fish. The children enjoy throwing food for the fish to jump out of the water and catch. It’s really a nice thing for everyone,” said Calhoun, who added that he knows other areas where trout are stocked for the same purpose.

Residents of the township donate money to the board to purchase fish for the pond and purchase food for the fish, as well as pick up and keep the area nice, White said.

“We just purchased more than 100 fish and put them in the pond two weeks ago,” White said. She said the board buys the fish from the Cedar Springs Trout Hatchery.

“We just want to know why… what can we do to keep it open… what we can do to rectify the situation and keep it there,” White said.

The board is asking residents of the township and others who enjoy the pond to join them tomorrow when they meet with Wenrich at the pond.

“This pond has become a great treat for young and old and we want to know what we can do to keep it open,” White said.

“It’s always a busy place. Little ones and older people alike come out and watch and feed the fish. We have rules posted and have never seen anyone abuse those rules. It’s really neat to see the little boys and girls with their fishing poles hung over the railing during fishing season,” she continued.

“It’s enjoyed by everyone,” she said.

Attempts to reach the Conservation District were unsuccessful.