CHRIS MORELLI/THE EXPRESS Artists renderings of the New Love Center’s planned facility, which will combine all the efforts of several area churches. The facility is expected to cost between $4-5 million. There will be ample parking, a warehouse, a cafe and a market at the new site.

CHRIS MORELLI/THE EXPRESS The New Love Center serves lunch in the Cafe Monday through Friday, 11 a.m. to 12:30 p.m. every day. The cafe is located inside Trinity United Methodist Church in Jersey Shore. 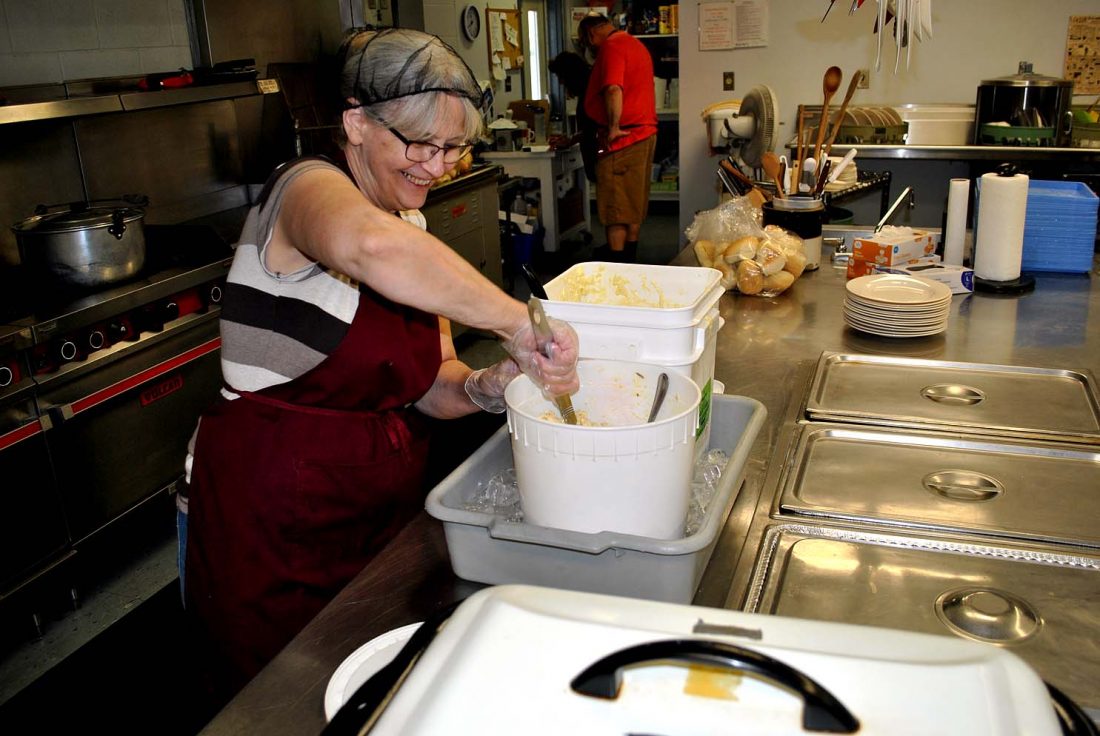 Last week, the New Love Center opened its doors and unveiled its plans to build a $4-5 million state of the art facility. The New Love Center’s Board of Directors recently purchased a parcel of land in Clinton County. Now, it’s just a matter of getting the funding and executing the plan.

Dave Winkleman is the board of director’s vice president. He believes that the vision is extremely realistic.

CHRIS MORELLI/THE EXPRESS Shelves of food wait for distribution in the basement of St. John’s Evangelical Lutheran Church in Jersey Shore. Food is distributed on the second and fourth Fridays of every month.

“The long term plan — three to five years out — is that we’d like to build the building on the site,” Winkleman said. “We’re looking at a three-year (capital) campaign and a two-year build time. Projecting five years out, we would have the building.”

There are many layers to the project. The New Love Center started five years ago with an idea, as a small labor of love.

“When we started five years ago, we started as a sub-ministry of the Jersey Shore Ministerium. But over the last five years, we’ve developed the New Love Center, Inc., which is a 501(c)3 non-profit. We’re currently functioning out of four different locations,” Winkleman said. 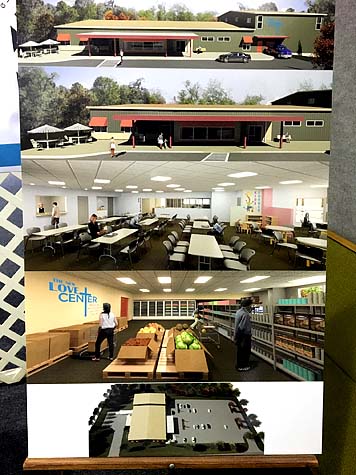 CHRIS MORELLI/THE EXPRESS Artists renderings of the New Love Center’s planned facility, which will combine all the efforts of several area churches. The facility is expected to cost between $4-5 million. There will be ample parking, a warehouse, a cafe and a market at the new site.

The new facility will be located across from the Chatham Run Feed Mill along Route 150 in Charlton. Once the facility is built, Winkleman said, getting over the basic hurdles will be a lot easier.

“We can function a little more efficiently and we can serve people better. We’ll be able to store more food and meet the needs more often,” he said.

At the present time, food is distributed twice a month — on the second and fourth Fridays of every month. The Cafe is open Monday through Friday from 11 a.m. to 12:30. Winkleman said that having just one facility will make the process much easier.

“Ideally, if we were serving meals the same place we’re distributing food, we could distribute food more often, distribute to the people who come in for the meals, things like that,” he said.

In artists’ renderings of the new facility, there is ample parking, a warehouse/storage facility, a cafe and a free market.

“Everything is all in one place,” Winkleman said.

There’s certainly an excitement to see the new building come to fruition. At last week’s event, board member Donna Batschelet talked about the land and forthcoming facility.

According to Batschelet, the market or “shopping” area will be key.

“To eliminate some of the waste … some of the things we pack in the boxes, people don’t use. We don’t want to waste food because our budget is too high. This will allow the ‘customer’ to choose. A volunteer will go with them and tell them how much food they can choose. It will eliminate a lot of waste,” Batschelet said.

Winkleman is excited to see this take shape.

“They can come in, they can eat lunch, there’s a kids’ area, they can sign in just like they do right now, get their food from the pantry,” Winkleman said.

Right now, boxes are pre-packaged with food. Both Winkleman and Batschelet believe “Pantry Choice” will be a big hit.

“We’re still working out that number. We’re probably looking in the realm of around $4 million. Our goal over the next 12 months is to secure some larger donors,” Winkleman said. “We are looking for big partners right now. And then we’ll push a public campaign around October next year.”

For more information about the New Love Center, call (570) 772-3275 or email newlovecenter@gmail.com.