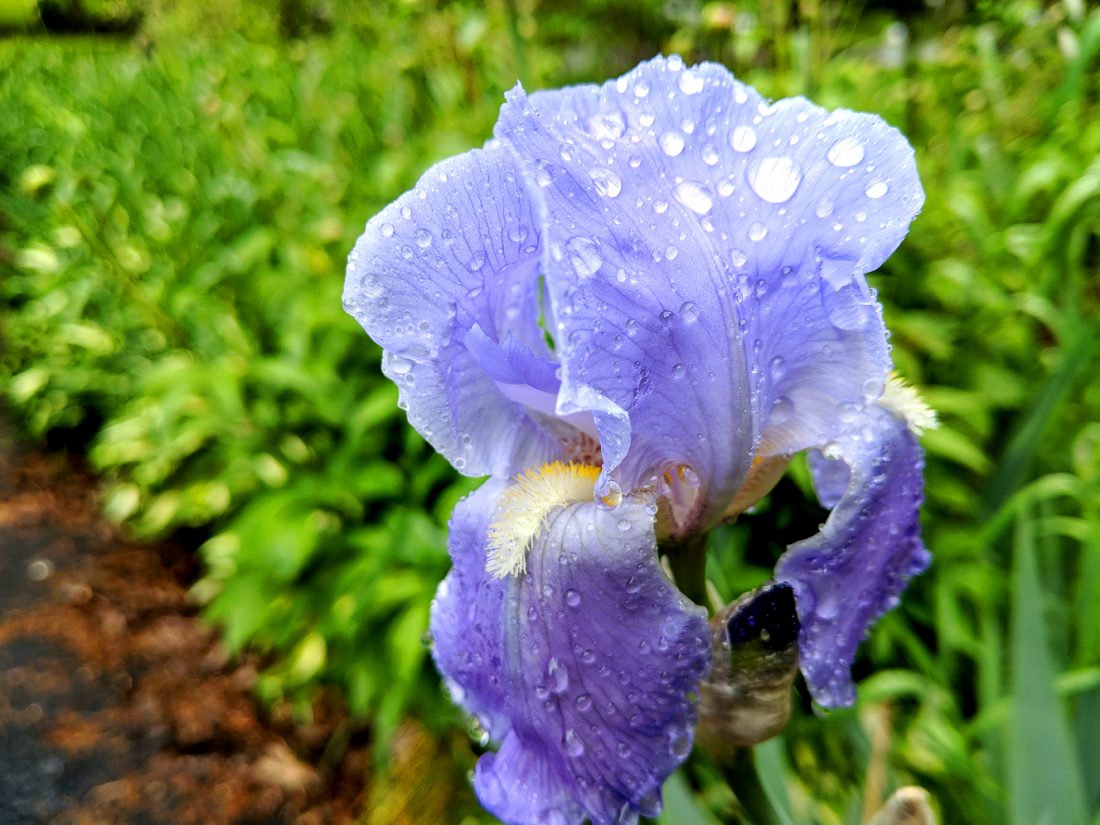 PHOTO PROVIDED Irises have begun to bloom this May.

Hello again, Clinton County! Are you ready to learn more about irises?

I hope you enjoyed seeing irises blooming somewhere in May. This year, I was delighted to see at least seven different purple irises in my gardens – including four different bicolors. These were all bearded irises.

For years, I have indulged my iris mania. I have clothes, curtains, pictures, and tins with irises on them. My everyday dish and bakeware pattern is “shadow iris.” I even named one of my cats Iris, since she is a cat of many colors!

Last May, my husband kept texting me pictures of what I thought were MY irises. One day, he sent me a color combination that I didn’t have. Whose flower bed was he getting into now?! It turned out that they were his mother’s irises. They are also growing at our house this year. Since she died in February, I’m hoping that they bloom next year, in her honor.

If you have your own irises, don’t forget to cut the flower stalks once blooms have all faded.

After the “killing” frost in the fall, you should remove and destroy any leaves and stalks. This will help to curb future insect and disease problems. The iris’s main insect pest is the iris borer, a moth whose larvae feed on iris rhizomes.

This paves the way for bacterial soft rot, the most serious iris disease. As the name implies, soft rot causes the rhizomes to become mushy (and smell bad). Cut off and throw away any diseased rhizomes, and disinfect your pruning shears afterwards. A solution of one part bleach to nine parts water works well for sanitizing garden tools. In comparison to bearded irises, Siberian irises have fewer insect and disease problems.

Besides pest problems, poor flowering in irises can be due to cutting leaves too soon, so don’t cut them until after frost. Also, most iris species don’t like excessive shade or fertilizer. In addition, don’t plant the rhizomes too deep. Finally, don’t let iris plants get too crowded, weedy, or wet.

In April, I planted crested irises under the two red maple trees in front of our house. Grass doesn’t grow there, but perhaps these irises will, since crested irises like shade. They are growing very slowly.

Fertilize new iris beds and allow to settle before planting. Follow soil test recommendations for best results. Otherwise, apply a low-nitrogen fertilizer. It is better to underfeed than to overfeed. Reblooming varieties are the exception, however, as they are more likely to flower again in the fall with supplemental food and water after the spring bloom. Do not let fertilizer (or mulch) cover rhizomes.

Irises can be divided and re-planted at any time except winter, when the ground is frozen.

I usually dig up irises to give away while they are blooming, just so I know their color. For irises that produce rhizomes, dig under and lift out a whole clump of rhizomes at once. Keep only healthy rhizome sections. Each section must have at least one growing point (fan of leaves), a few inches of rhizome, and some roots.

Before re-planting, cut leaves back to one-third their length. Plant 1 to 3 sections of the same color 8-10 inches apart. The top surface of the rhizome should be just under the soil surface; plant roots deeper.

Firm the soil well, and water thoroughly. Siberian irises do not require division as often as bearded irises. Divide Siberians when the centers of the clumps no longer produce flowers. Bulbous irises, such as Dutch irises, should be planted at a depth of 5 inches, roots down, 6 bulbs per square foot. Transplanted irises may not bloom the following season, but patience will be rewarded!

Annual grasses, like foxtail, can be controlled by hand pulling. Perennial grasses, such as quackgrass, are much more difficult to control, as they spread by underground stems, which are also rhizomes. All of the quackgrass rhizomes must be completely destroyed. Every piece left behind can grow into a new plant. This reminds me of the mythical Hydra: cut off the head, and two grow back in its place!

Herbicides are not a practical control measure for home gardeners, either. You could kill your irises as well as the weeds. You might be better off if you dig up all irises and get rid of the quackgrass, repeatedly digging them up over a period of several weeks. Once you have eradicated the quackgrass, you can then replant the irises.

The Louisiana iris and some yellow varieties love water. In fact, yellow irises were used in natural water purification systems, but they became invasive, and spread too far. In general, however, irises prefer well-drained soils, and if the rhizomes stay wet, they might get soft rot. If your garden has poor drainage, consider building raised beds.

There are so many iris varieties out there. I look forward to seeing more of them in my garden in the near future!

Kathryn Dorman is a member of the Master Gardeners. She can be contacted by emailing kldorman@comcast.net