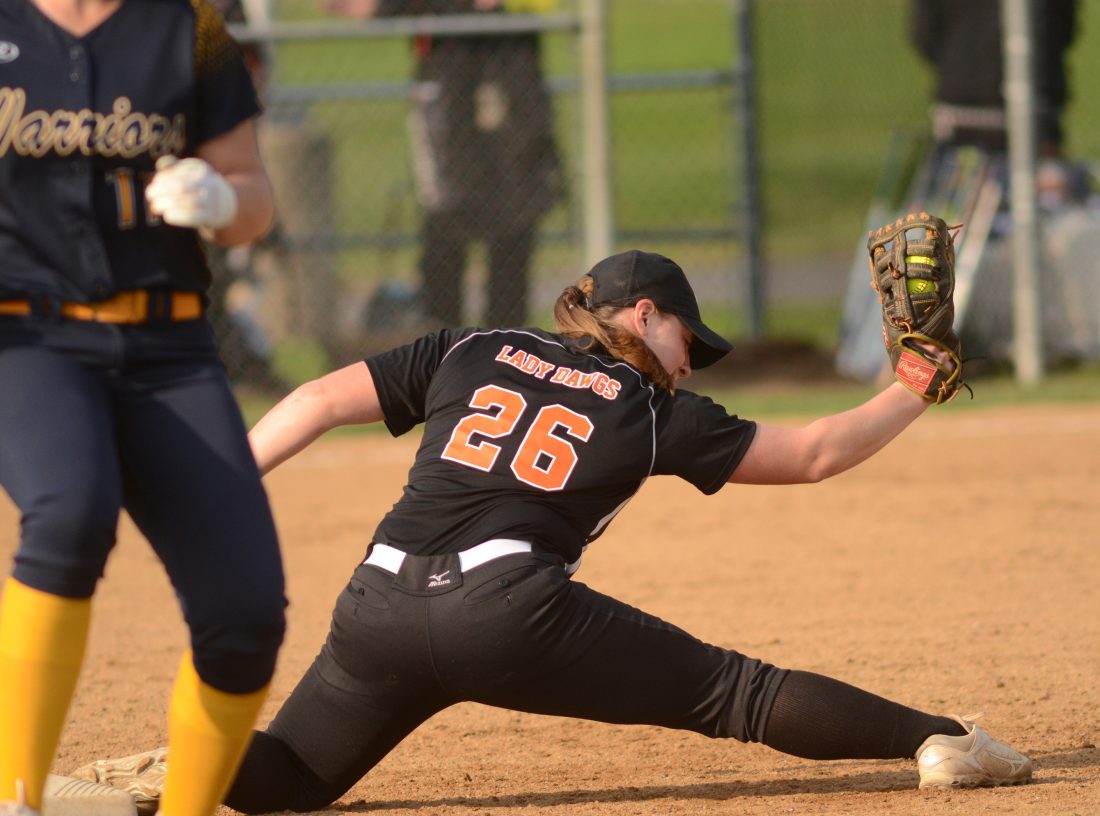 (RALPH WILSON/FOR THE EXPRESS) Jersey Shore's Arizona Schreck stretches to make the tag on Montoursville's Taylor Shuman during a softball game on Thursday in Montoursville.

Everything that makes Jersey Shore so dangerous was on full display Thursday afternoon at Montoursville. The Bulldogs followed up a big Wednesday win against fellow district title contender Mifflinburg by playing one of their most complete games this season as every softball facet perfectly clicked together.

Russell threw a masterful 4-hit shutout, Stetts, Schuler and Aubrey Stetts produced two hits each and the defense made no errors as Jersey Shore blanked Montoursville, 9-0 and won its fourth straight. The HAC-I leaders scored eight runs over the last three innings, breaking open a close game and continuing their upward trend.

“The whole team was coming together. We knew last night was a good win and that we needed to win tonight because Montoursville is one of our big rivals and we always like to beat them,” Hailey Stetts said after going 2 for 3 with two runs. “As a team, it was all together. We all worked hard, we were all hitting the ball very well and we all played good defense.”

“The three things we preach every day are good pitching, timely hitting and great defense,” Jersey Shore coach Randy Smith said. “We had all three tonight.”

While all three components shined, it was the defense that started altering the game first. Schuler’s two-out infield single and an ensuing error scored Allison Lorson and gave Jersey Shore a 1-0 second-inning lead. Immediately, Montoursville tried answering and it appeared Jordan McCarthy would have a leadoff single when she blooped the first pitch in the bottom of the inning into shallow center field. Instead, Stetts sprinted in, covered a wide range and made a dazzling face-first catch, holding onto the ball while rolling over.

The importance of that catch was magnified a batter later when Kaitlyn Klotz slammed a triple deep into the right-center field gap. Instead of the game being tied, Klotz was at third with one out and Russell put out the fire, inducing a groundout and recording her first strikeout. Stetts’s catch also personified Jersey Shore’s fantastic defense. The Bulldogs played their third error-less game in four performances and have made just one error during that time.

“At the Mifflinburg game there was a ball hit exactly like that and I didn’t think that I gave it 100 percent,” Stetts said. “So tonight I wanted to make up for it and give it my all and just go after it. When we’re out there making those good plays I definitely think Kylie is more comfortable pitching.”

Russell went after it from there and not even a painful hand injury could slow her down. The junior fouled a pitch off her fingers during a third-inning pitch and then was hit in her throwing shoulder. Russell’s fingers immediately swelled up, making what she did even more impressive. If Russell can throw as well as she did yesterday with a hurting hand, imagine what she might do when healthier.

The left-hander pitched her best game, retiring 16 of the next 17 batters following Klotz’s double. Russell had all her pitches working, seemingly spotted the ball wherever she wanted, kept Montoursville off-balance and struck out six. Russell pounded the strike zone, walking none and going to three-ball counts just twice. The area wins leader with eight, Russell twice retired Montoursville in fewer than 10 pitches and threw an efficient 93 pitches against a team that had scored 33 runs in its previous four games.

“She’s one of the best pitchers we’ve seen this year. She has good spin, good location, good movement and you can’t ask for any more from your pitcher,” Montoursville coach Mike Tate said. “And she did it after getting hit in the hand. She’s a tough kid and she proved it today the way she pitched.”

Jersey Shore is hitting a collective .347 and started showing off that offensive prowess over the final three innings, collecting eight hits during that time. Daytona Wentzel and Arizona Schreck ignited a three-run fifth-inning rally with consecutive one-out singles. Herman then slammed a two-run double into deep right-center field before Hailey Stetts followed two batters later with a two-run single that made it 4-0.

Russell hit a seventh-inning RBI single and Wentzel, Herman and Schuler all had RBIs during a four-run seventh-inning surge as the Bulldogs broke open the game. Aubrey Stetts delivered her second hit that inning and was one of eight players who combined on the 11 hits. The Bulldogs have hit well throughout the lineup all season and nine players either had a hit, scored a run or drove in a run against Montoursville.

“We’ve had a number of girls stepping up this year, hitting-wise,” Smith said. “If we have a couple girls that are not hitting someone else is always stepping up and taking over. It’s awesome. It’s what you like to see as a coach.”

“Whenever you do have a bad day the girls always pick you up so much,” Hailey Stetts said. “It helps a lot to help us jell and become a better team.”

Despite the loss, Tate likes what he sees from his team as well. The Warriors (5-5) turned their season around winning four straight games entering yesterday’s contest. That has included impressive wins over teams like Milton and Central Columbia. Yesterday was a setback, but Montoursville is making a good comeback and Maddy Probst and Madison Shaffer took turns showing how in the second inning.

After Probst hustled in from left field and made a running catch that robbed Hailey Stetts of a one-out single, Shaffer made one of the best area catches this season. The senior center fielder sprinted back toward the fence, extended her arm high and made a brilliant over-the-shoulder catch that took an RBI extra-base hit away from Aubrey Stetts.

“We did some good things this game,” Tate said. “That catch was spectacular. That was huge. That kept us in there. That kept the girls pumped up for a while.”