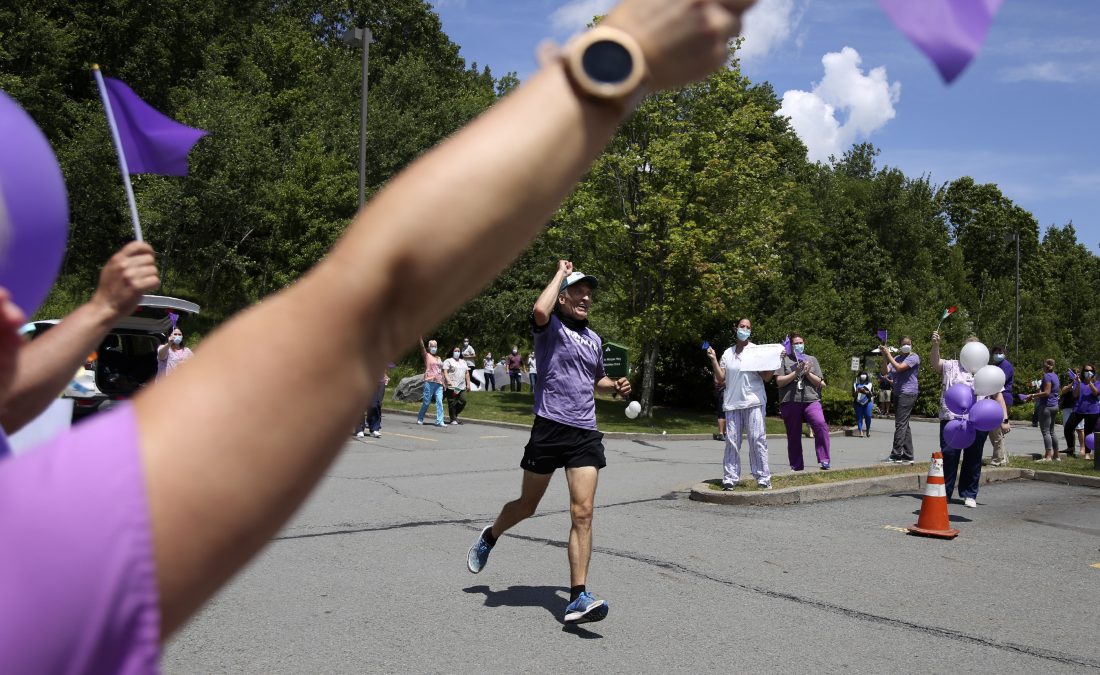 SCRANTON, Pa. — Endurance athlete Corey Cappelloni once ran six days through the Sahara Desert in what’s considered the most grueling foot race on Earth. But a 218-mile run to grandma after she was sickened with COVID-19 turned out to be the longest, toughest and most rewarding of his life.

Cappelloni spent seven days covering the distance from his home in Washington, D.C., to the nursing home where 98-year-old Ruth Andres, lives in his hometown of Scranton, Pennsylvania, arriving June 19 to cheers, flags and purple balloons, her favorite color.

Dozens of workers at the Allied Services Skilled Nursing & Rehab Center applauded as he crossed the finish line. Out of breath but smiling, he pointed to “Nana’s” fourth-floor room, where she peered through the window. A sign hung outside read, “I Love You Corey.”

“Nana, you’re a strong person,” Cappelloni said into a cellphone and microphone, as a nurse held up the other end of the line to Andres. “You’re going on 99, and you still have many more miles.”

Unable to visit in person out of safety concerns for residents, he promised to give her a long-awaited hug soon.

Cappelloni’s “Run for Ruth” has raised more than $24,000 so far for smartphones and tablets to help older adults isolated due to the pandemic communicate with loved ones.

It also aimed to raise awareness about residents and caregivers in such facilities, many of which have been hit hard by the coronavirus, and to honor the lives lost, including Cappelloni’s great-uncle Charles Gloman, who died May 11.

Andres was diagnosed in early June. She began running a high fever, was too weak to talk some days and had to get supplemental oxygen. Cappelloni, who was calling daily, noticed she was becoming more and more afraid.

“She was no longer able to have family, visitors, friends visit her,” he said. “And she became a little depressed, so I knew that I had to do something to try to uplift her spirits.”

At first he sent photo books from his travels around the world. Then his girlfriend, Susan Kamenar, had an idea: What if he ran to her?

So he set out northward along trails and streets, through forests and residential neighborhoods. Kamenar followed behind in an RV the couple rented to better maintain social distancing while eating and sleeping.

Cappelloni had been training for an ultramarathon scheduled for mid-March, but he pulled out because of the pandemic. He ran an ultramarathon in Peru in December, and was still in good shape.

But even though he’d previously finished races like the more than 150-mile (251-kilometer) Marathon des Sables in Morocco, he wasn’t sure he could endure the equivalent of seven ultramarathons of 31.2 miles (50.2 kilometers), longer than a standard 26.2-mile (42.2- kilometer) marathon, in as many days.

He started strong and was posting good daily times, but on day six he hit the wall. Exhausted and hurting, he slowed to a walk. Then came a text message and a huge mental lift: Nana had made a full recovery.

“She had some very rough days,” Cappelloni said that day in a video he posted online. “But you know, she fought through them, and that’s what I’m doing today.”

Cappelloni said Andres was there when he took his first steps and he often refers to her as his second mother.

“Why I decided to do this was to show my grandmother that I’m here for her and that I really care for her, Cappelloni said, “because she has always been there for me from when I was born.”