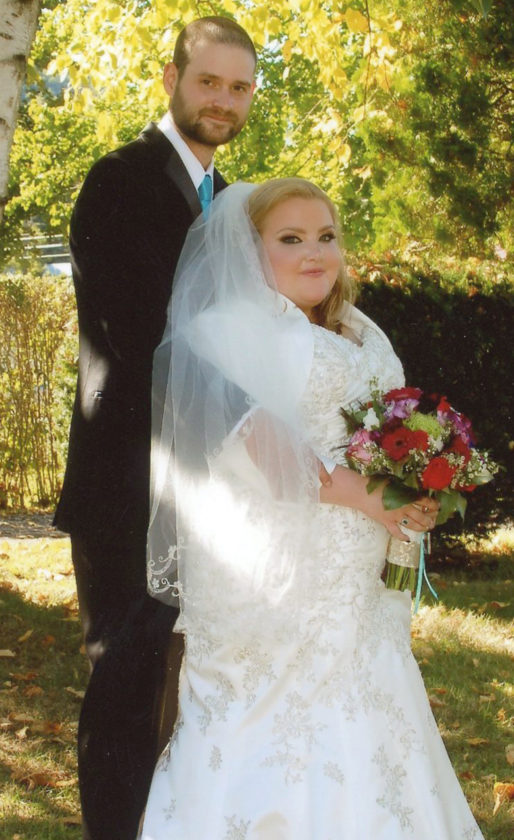 Colette Elaine Finnefrock was given in marriage by her parents, Edward and Paula A. Finnefrock of North Bend, to Douglas Paul Meredith on Sept. 24, 2016. Doug is the son of Paul and Lisa Meredith of Swissdale.

The rehearsal dinner was hosted by the parents of the groom at their home.

Doug is employed as an equipment operator and truck driver at the Wayne Township Landfill. Colette is employed by Northwestern Human Services as a behavioral health worker at the Renovo Elementary School. The couple honeymooned at Punta Cana in the Dominican Republic. They are making their home in South Renovo and are expecting their first child in August.

Collette wore an alluring strapless, sweetheart neckline, satin trumpet gown with gold beading and lace and a matching jacket and veil. She carried a bouquet of roses, orchids and mums in peacock colors.

Maid of honor was Morgan Rich and matron of honor was Megan Rebuck. Bridesmaids were Amy Jo Cohick and Melissa Baney, sisters of the groom, along with Leeann Minihan, Sara Costulas, Heather Wertz and Marissa McDermit. Flower girl was Paige Jones, cousin of the bridge. All the attendants wore gowns of blue, green, purple and teal.

Douglas wore a black tuxedo with teal vest and tie. His best man was Tyler Croak. Groomsmen were Josh Diel, Scott Wian, Jason Dumm, Luke and Jake Baney, nephews of the groom, Lance Finnefrock, brother of the bride, Keith Redis, cousin of the bride. Ring bearer was Clayton Cohick, nephew of the groom.

The newlyweds were so fortunate to be surrounded by family and friends, some who traveled great distances, especially Doug’s grandparents, Mr. and Mrs. Fred Page, Mr. and Mrs. Stan Meredith and Mr. and Mrs. Billy Probst.

Dear Annie: My body’s my body