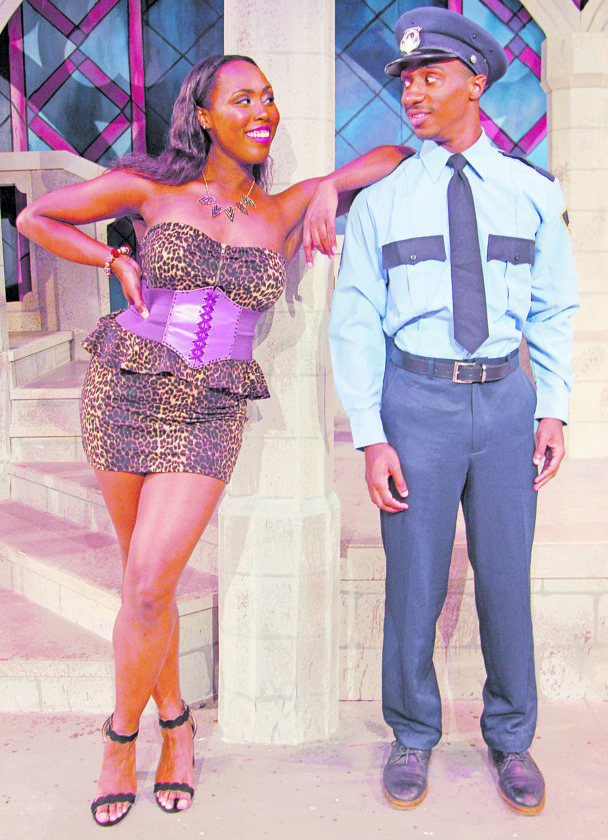 PHOTO BY DAVID LEIDHOLDT Tayler Harris as Deloris Van Cartier and Dana Orange as Eddie are seen in “Sister Act: The Musical” at Millbrook Playhouse.

‘Sister Act’ is a show you don’t want to end!

Deloris Van Cartier, who is auditioning to perform at Curtis’s — the Philadelphia nightclub owned by her gangsta boyfriend — stumbles upon a murder and is taken into witness protection by Queen of Angels Church. Right away we have the beginnings of a delightful dramatic conflagration as Deloris encounters the rule-bound Mother Superior, and Body and Soul battle it out for supremacy.

One of the lessons of this heart-warming musical comedy is that both sides of this equation are impoverished unless they can find ways to connect, and this shows up most obviously as we are introduced to the convent’s residents, a somber gathering of nuns, and we listen to their discordant caterwauling. The half-lives that the nuns are leading find an equivalent in the church itself, whose Sunday services have been playing to a virtually empty house.

The nuns are at first torn between the security of convent life (“The world’s your oyster when you’re locked inside a cloister”) and their fascination with Deloris. But as soon as Deloris, who has exchanged her leopard prints for a habit, is asked to take charge of the nuns’ music lessons, she begins to unlock the voices they have kept buried inside – and from then on, they are hers. The song “Raise Your Voice” is a major turning point as Deloris coaxes and cajoles them to “Dig down deep inside” and “Let your soul rejoice,” and the nuns’ tentative chirpings turn into full-throated praise.

Sister Mary Robert, the postulant (played with delightful adolescent intensity by Carly Grayson), experiences the most dramatic transformation. When we first see her, she is collapsed into herself and barely daring to breathe. But as she and Deloris begin to form an unlikely but touching bond, we watch as she reaches out for a life she hasn’t even been able to imagine, and we realize that the intruder in the convent has actually become a catalyst. Once the nuns have gotten even a little taste of emotional possibility, the drive toward growth and self-expression is unstoppable.

The cast of “Sister Act” brings this story to remarkable life. In spite of the fact that the sisters are all named Mary Something, each of them has a unique personality, wonderfully expressed by the actresses in these roles. Audrey Rose Young, as Mother Superior, brings a sly comedic sensibility to her role as stern antagonist, convincing us in the end that even she is not immune to life-affirming change. Curtis, the gangsta boyfriend (played by Corey Barrow), and his henchmen are delightfully menacing, eventually dancing and singing their way into the convent and into our hearts. One of the most outstanding performances of the night was delivered by Dana Orange in the role of Eddie who, as a shy cop, has to prove his bravery to earn Deloris’s love. His strong singing voice and confident stage presence lend an additional bright note to the production.

Tayler Harris is excellent as Deloris. The role demands a full emotional range, from irreverence to vulnerability, as she learns from her contacts with the sisters that fame and glitter are not enough. Harris gives a strong performance, hitting the glorious high-notes as well as the more quiet lows, and holding the play’s emotional center with assurance. Forced to ask “what you are left with when the lights go out,” she reveals that she too has been living a half-life and that – as the play so insistently makes clear – we need to expand our boundaries to become truly human.

The play’s ending, in which audience members become church-goers now filling the pews, is spectacular. The ensemble, singing and dancing in costumes designed to resemble vestments, and ashine with the spirit’s joyful noise, have been forged into a Sister Act that has found a way to help the world rejoice. You want it to go on and on.

“Sister Act” is a must-see. It’s playing for only two weekends, and I’m betting it will be extremely popular. Get your tickets now by calling 570-748-8083. This play will take you to heaven!

For show dates and times, ticket information and reservations, call 570-748-8083 or visit millbrookplayhouse.net.

— The William and Hannah Cryder Shoemaker family reunion scheduled for July 26, has been canceled. — LHHS ...