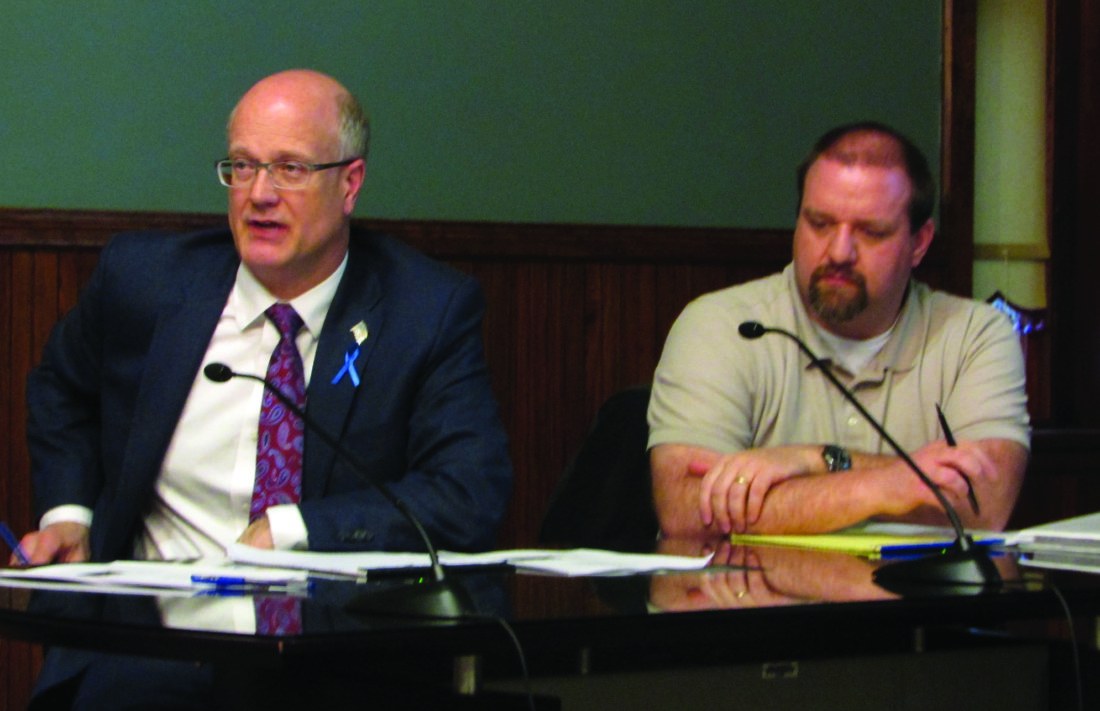 BELLEFONTE – Centre County has the potential to bring in an additional $602,685 annually for transportation projects throughout the county.

This would be possible due to a potential $5 increase to motor vehicle registrations that the Centre County Board of Commissioners has been discussing over the past few months and held a series of three local town hall meetings, the latest one held Thursday, April 6 at the Centre County Courthouse Annex in Bellefonte. At the meeting, further information on the benefits of the additional fee were discussed and the public had the opportunity to speak about their concerns.

According to Centre County Commissioner Mike Pipe, this extra source of funding, which would be supported by approximately 120,537 non-exempt vehicles registered in the county, would be in addition to $187,000 the county is able to invest in transportation projects from a special fund known as a liquid fuels fund, which has money that is collected from toll revenue, registration fees, license fees and gas tax. A total of $5,521,000 in county transportation projects has been identified, but each year since 1988, the county has only been able to award an average of approximately $182,842 to municipality projects. Types of projects the funding would benefit include bridge repair and replacement, road repairs and repaving and other improvements that would benefit transportation.

The potential additional funding stems from Act 89, a law that was signed by former Gov. Tom Corbett in 2013, which gives counties in Pennsylvania the option to pass resolutions to collect an additional $5 vehicle registration fee, Pipe explained at the Thursday town hall. A total of 14 counties in the state have already passed resolutions.

Looking at the bigger picture, the additional money the county would receive to fund local transportation projects could also be used to leverage transportation funds from the state government. Pipe explained that, initially, approximately $2 million will be reserved for each county that has passed a resolution, with a 50 percent local match commitment that would be required in order to secure funding from PennDOT’s local bridge bundling program.

Looking at bridges in the county alone, there are 13 of 58 municipally-owned bridges that are considered “structurally deficient” that would benefit from the additional revenue, Pipe said. Structurally deficient means that the bridges has deterioration that impacts one or more of its major components.

Another 18 in the county are considered “borderline,” which means they are still what is deemed to be fair condition, but they are nearing the structurally deficient designation, Pipe said. In addition, 10 other bridges are designated as “functionally obsolete,” meaning that they have older features compared to bridges that were recently built and have restricted road widths and weight limits.

In addition, funds could be leveraged at the federal level.

“The important part of the federal transportation funds conversation is that President Trump has been talking about a trillion dollar transportation plan,” Pipe said. “If that would go into place, there could be a conversation where Centre County could be in line for a lot of those funds that would be generated through that bill.”

While the majority of responding municipalities are in favor of the $5 fee, there are issues that other municipality officials and residents have with the proposal.

Mark Huncik, State College resident and neighborhood president of the Highland Civic Association, brought his and neighboring residents’ concerns forward. Huncik said that a primary concern is that legislation that allows for the fee is too rigid for an area like Centre County. Within the county, many individuals travel to the county’s biggest employer, Penn State, from other nearby counties and use the county’s bridges and roads frequently and leave without being required to pay the potential fee. He added that there is a lot of public transportation in the area that is exempt from the fee that should be taken into consideration if the fee is enacted.

Pipe said that tolling to solve this problem had been a potential option, but not a viable one.

“You have had folks who are coming in from out of the area, coming into Centre County, and if they wanted to use our major roads, they would have been tolled and the state could have set up on one on I-99 somehow, some way,” Pipe said. “The pushback there was they said the fees were going to be hit on us, that even if you live in Centre County and you need to go somewhere else, the fees are going to hit you.”

Another concern Huncik had was that the additional fee would come at a very unfortunate time for residents of the State College Borough.

“We just learned this past week that the State College School District is planning to implement a 1.3 percent increase in taxes,” Huncik said. “The Borough themselves are talking about a standard tax increase, almost upwards of two percent potentially each year for the next four years.”

Keith Harter, vice-chair of the Walker Township Board of Supervisors, expressed concern over the fee as well, and said that several individuals he has talked to have said that they do not want this extra fee, especially when they already have to pay for other fees annually, such as emissions testing.

How the money will be allocated is another concern.

“I feel that the money is going to certain regions and not benefit the smaller municipalities as much as it could,” Harter said. “A lot of these bridges that you have are in the smaller municipalities, and one in Walker Township, although inefficient, gets minimal traffic compared to a lot of other roads in our township. So, our money is spent on those roads while not bringing it [the bridge] up to total safe standards.”

Harter later further said that he felt the amount of the projects that need funded in the county is unattainable based on the small portion that would still only be able to be funded each year. He said he was worried that the county will have a hard time catching up with funding of the various projects without a different approach to acquire a larger portion of funding.

Pipe said that all projects might not be as expensive as originally proposed, due to funding from the municipality itself or the state.

Commissioner Mark Higgins said that right now, the county is essentially restricted to splitting its annual liquid fuels disbursements 35 ways for the 35 municipalities in the county.

“Municipalities are waiting seven years before its their turn again, so this could potentially, with that state match money, that extra $2 million, turn a seven-year wait into a two-year wait on average,” Higgins explained.

In addition, there are guidelines in place to determine priority of projects. According to Mike Bloom, county senior transportation planner, the highest weighted criteria is safety and security (100 percent), preservation of existing transportation system (94 percent), efficient system management and operations (86 percent), integration and connectivity (75 percent), accessibility and mobility options (73 percent), consistency with planned growth and development areas (63 percent), environment and air quality (59 percent), economic vitality (53 percent). Local bridge projects are prioritized based on structural review and its context in the community, such as amount of daily traffic and number of properties it serves.

The Centre County Board of Commissioners will take possible action on the $5 fee at a future meeting. If a motion is passed to enact the $5 vehicle registration fee, the county would initially include the fee in its liquid fuels disbursements for 2018 projects.