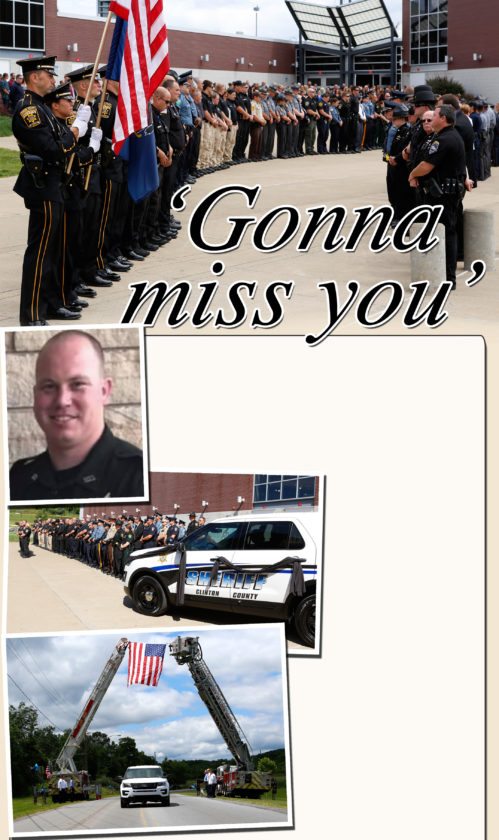 SPENCER McCOY/THE EXPRESS Above, more than 100 law enforcement officials from near and far pay respects to their “brother” Stephen Herrold yesterday. At left, Sheriff Kerry Stover leads the funeral procession under an arch formed by ladders on Keystone Central Drive.

Noll, who was best man at Stephen and Kelly’s wedding two years ago, was just one of several who took the microphone at Central Mountain High School to talk about the young man who seemed to have captured the hearts of everyone he met and will be sorely missed, both in his personal life and in his job as a deputy sheriff in Clinton County.

More than 100 members of law enforcement from near and far lined the auditorium, paying respect to one of their own. After the ceremony, the brothers and sisters in uniform formed two lines outside, stood at attention and saluted Stephen’s casket and members of his family as they passed by, then boarded vehicles to take Stephen on a final ride through his old stomping grounds in Marsh Creek and then on to Schencks Cemetery in Howard.

The awe-inspiring procession was hundreds of vehicles long with lights flashing on police cruisers, sheriff’s vehicles and fire trucks, as they traveled Route 150, which was lined with blue and black balloons strung along the guiderails and hung from sign posts. Posters bearing Herrold’s name dotted the landscape of some residences.

This was a day to remember Stephen Herrold for the man he was.

And there was a lot to say about that man.

Cole Bitner said he and Stephen were friends since elementary school. “I don’t remember Stephen ever being in a bad mood. He had a great personality. He was one of a kind… not afraid to be himself. And I am lucky to have been his friend for so long,” Bitner said.

Perhaps one who knew Stephen best, his sister Stephanie, read a letter she had written to Stephen after his death.

“I never dreamed we’d be back in our old high school again under these conditions. But here we are… honoring you,” she said, her voice cracking as she spoke of a wonderful and loving life with her brother.

“We were the duo… Steph and Stephen. You called me Sis. We fought, played Nintendo until we had blisters on our thumbs, used our imaginations playing outside and rode bikes into the sunset. As the bond grew stronger I was recognized as Stephen’s sister. It’s an honor. It was always followed by laughter. I’ll never forget his laugh… or his ‘shitty grin,’ as mom called it,” she said.

Steph said she was so proud that Stephen had finally found his true calling and he was very passionate about his job as a deputy sheriff. And she thanked him for bringing Kelly into their lives.

“You were the best uncle… Super Hero to my son. And you called my daughter a princess. You were larger than life… the person you made yourself to be.

“I became an aunt 16 days ago… You were the greatest husband to Kelly while she was pregnant. Brock had the best daddy in the world in his first 10 days of life. At 11:40 p.m. last Thursday night, God took you away. I’ll never know why he took the peanut butter from my jelly,” she said promising Stephen that she will be there to help Kelly, Brock and the family.

At Kelly’s request, Stephen’s favorite song when he was with Brock — “My Old Man” by Zac Brown — was played.

As the song played, photographs of Stephen with his newborn son were shown on a large screen at the front of the auditorium.

Stephen was always smiling as he held his son, wrapped in a red and black buffalo plaid blanket and wearing a matching cap. There were also photos of Stephen with his dog. They too showed him smiling.

Before Steph sat down, she said her brother liked to sing and asked everyone to think of the song “You Never Even Called me by my Name,” sung by David Alan Coe, as one to remember with Stephen.

Rev. William Lansberry welcomed everyone to the service to pay tribute to a “wonderful, wonderful young man,” Stephen Blair Herrold.

“He was a young boy at heart… always getting into something. I remember the time he took the soap suds from the tub and put them in the aquarium. He liked to have fun, enjoyed people, loved fishing and hunting and telling those fishing stories, you know, like ‘the one that got away.’

“He was a people attracter and a people person,” Rev. Lansberry said. “It was a great honor knowing this young man.”

“There was just something about him. He was outstanding. He took his job seriously. He used the on-off switch. He served his community. He helped people. He confided in people. He was polite and courteous. He projected law enforcement in a positive way. But he also knew when to take charge and when to flip the switch when he had to. He trusted his heart and he did it right,” Stover said.

He reminded the audience of all the photographs they had seen of Stephen in the auditorium.

“There was not one time he didn’t have that smile… or that ‘shitty grin.’ I can’t help but wonder what happened right before that photo was taken,” he said.

Stover also read a letter from Gov. Tom Wolfe, lauding Stephen for his lifetime of service to his community and the remarkable contribution he made to protecting the citizens of Clinton County and the Commonwealth.