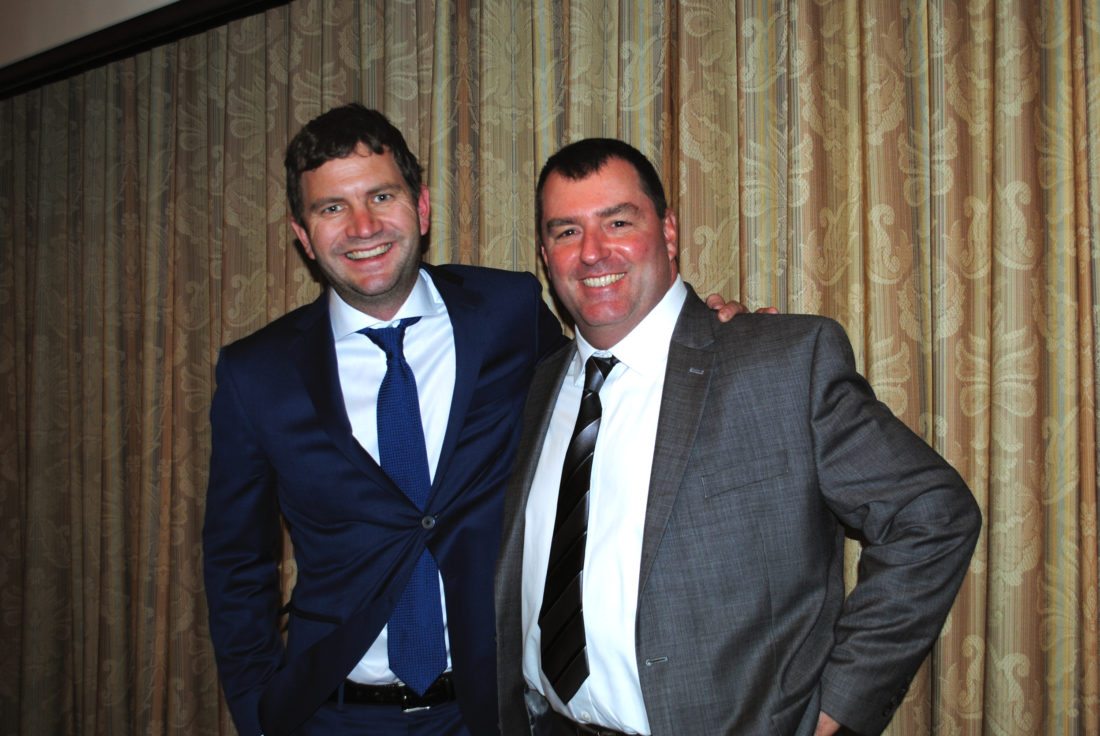 Terrapin Care Station at South Avis is one of only 12 such endeavors selected by the state Department of Health to receive a medical marijuana grower-processor permit, and Woods said the local growing and processing plant expects to employ at least 60 people in the first year.

A graduate of Penn State in engineering and of the University of Colorado with a graduate degree in math, Woods founded Terrapin Care in 2010 as one of the first such businesses in Colorado.

But, “I’ve always been a Pennsylvania boy at heart,” he said. “It’s time to return home.”

He also received spontaneous applause when he stated that this nation’s veterans are a primary focus of his company, and that he plans to employ a core of veterans, as well as others, at the Henry Street Partnership facility in South Avis. 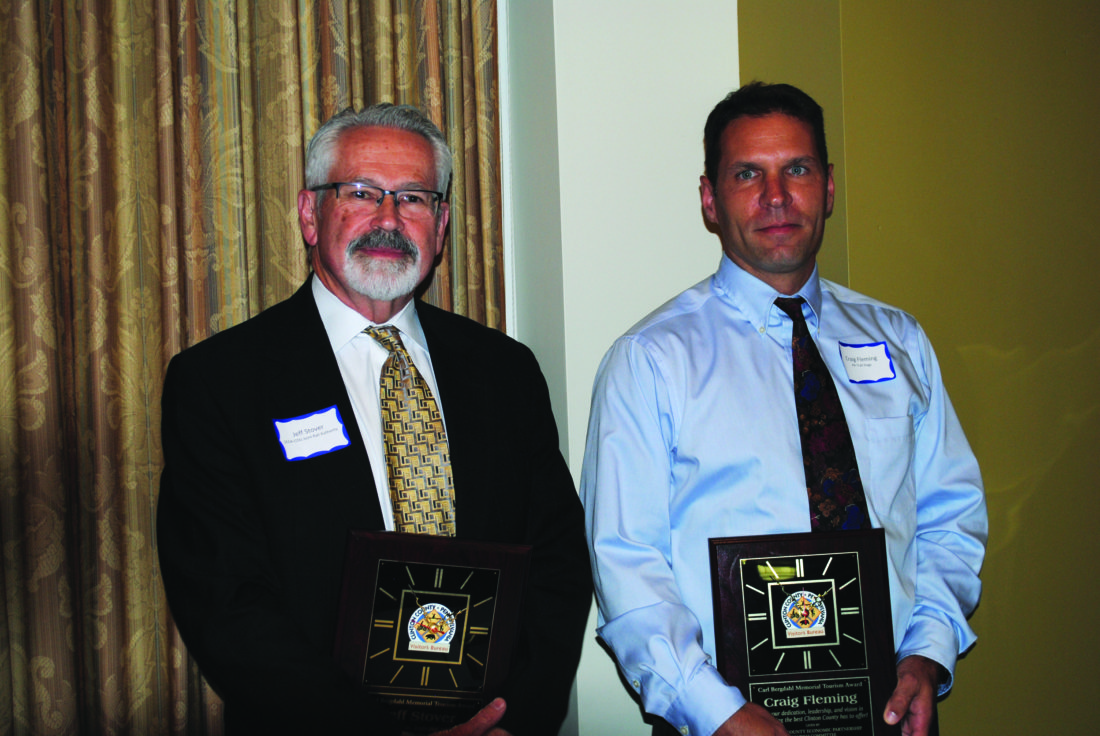 “If medical marijuana can help in even the slightest way” to slow the opioid epidemic, it’s something Terrapin Care wants to be involved in, he said.

Pennsylvania has one of the most inclusive lists of medical conditions that marijuana may legally be used for, and PTSD is one of those conditions, he said. “This was something we had to fight tooth and nail for in Colorado,” he added.

He said his vision for the South Avis facility is akin to how the railroad helped build Jersey Shore into an industrial boom town, but “at the heart of our plan is to serve patients who seek the medical benefits of cannabis.

“I promise Terrapin will always keep costs low for patients including veterans, many of whom are on a fixed income,” he pledged. 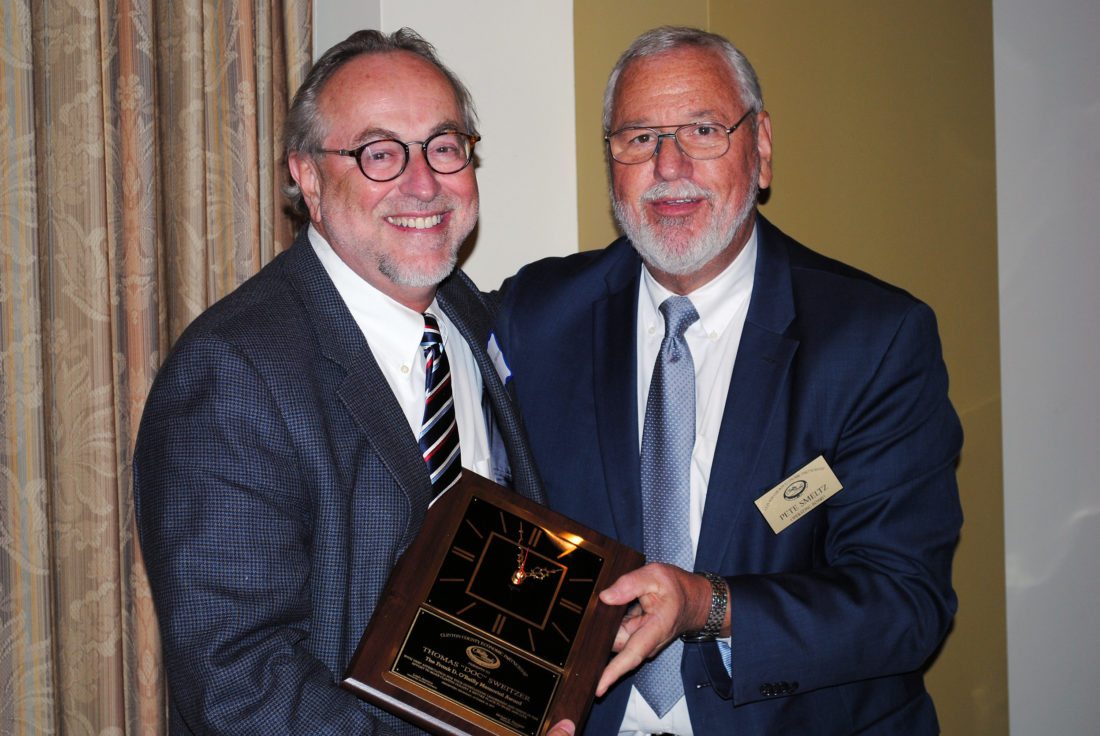 ‘Doc’ Sweitzer, left, was surprised when his name was called as the winner of the Frank D. O’Reilly Award. County Commissioner Pete Smeltz made the presentation.

He referred to Dave Harger of Harger Utility Contractors Inc. and Dave’s respect for his fellow veterans, then made another announcement that earned applause — that Terrapin Care Station is offering a $25,000 matching grant to stimulate the revitalization of Veterans Park in Lock Haven.

His company has already committed tens of thousands of dollars to worthy causes in Colorado, and he said he plans to continue that philanthropy in this state.

As a Penn State graduate, Woods said he started looking at Centre County for the right place for his first Pennsylvania facility, but found Clinton County to be “a completely embracing community.” Terrapin Care will make a lasting impact here, he said.

“We see Clinton County as a county with tremendous opportunity,” he said. “We look forward to building a long-lasting partnership with your community.”

He also presented a video showing how his company grows and processes medical marijuana in Colorado.

Woods was introduced at the dinner by state Rep. Mike Hanna, D-Lock Haven.

Later in the evening, Thomas “Doc” Sweitzer was presented with the Frank D. O’Reilly Award for community leadership. Sweitzer was one of the people who suggested Woods look here instead of elsewhere for just the right location.

“You’re part of our family now,” Sweitzer told Woods from the podium. “We’re going to take care of you.”

He thanked the young business owner for bringing his company’s jobs here — “They’re going to be a game-changer.”

Clinton County Commissioner Chair Robert “Pete” Smeltz presented Sweitzer with the award, introducing him as a former trustee of Lock Haven University, a generous donor to LHU who has given his John Sloan art collection, the recipient of an honorary doctorate in public service from the university, and a big supporter of the Lock Haven Area YMCA, Millbrook Playhouse, and the Ross Library.

He was named one of the most influential political consultants in the country by the trade magazine Campaigns and Elections.

Sweitzer recalled that O’Reilly, for whom the award is named, was publisher of The Express and a mentor for his brother Charlie Ryan, who followed in O’Reilly’s footsteps as publisher.

“Charlie dedicated his life to this community through the newspaper, economic development, Millbrook Playhouse,” Sweitzer said. “I just do my part. I’m so blessed to have so many friends and to be a part of this community.”

Two years ago, when it seemed that the Megatransect would no longer exist, Stover returned as race director, and the race on the mountain has continued, under the new name of Boulder Beast.

“He likes showcasing the natural beauty of our area. He enjoys challenging people, ‘punishing’ them, and his efforts make them want to come back for more,” Hannis said.

Stover said the plaque he received should be broken up into about 150 pieces, one for each volunteer who helps with Boulder Beast or The Frozen Snot.

Since 2003, the Hyner View Trail Challenge and the Rothrock Trail Challenge have joined the list of annual trail runs, Stover said. “This area has really become a destination,” he said.

He thanked those who have supported the races over the years, and gave particular credit to Lock Haven City Council who, in 2003, could have said no but chose to say yes and open the city’s watershed to the first Megatransect.

Stover is again stepping down as race director, with Craig Fleming stepping up.

Fleming received the second Carl Bergdahl Award of the evening.

He created the Hyner View Trail Challenge 12 years ago, and this year, 1,300 people took that challenge, Hannis said. Fleming also created the Hyner Half, and the Sproul 10K. He and the Pennsylvania Trail Dogs run the Eastern States 100, the Call of the Wilds 25K, and the Little Pine 5-Miler.

“We have great hills and mountains,” Fleming said.

The trails here include streams, dirt roads, and other varied features. The area also offers friendliness to trail runners, he added.

“Trail running is the largest recreational sport right now,” he told the crowd.

Hannis said, “Trail running has become a cult, and Clinton County is the cult-ural center.”

Sheetz will pay employees extra $3 an hour during pandemic

By DEB KINER dkiner@pennlive.com ALTOONA — Sheetz announced Wednesday it will pay employees an extra $3 an ...

HARRISBURG —As a result of continued mitigation measures called for by Governor Tom Wolf and Department of Health ...

From staff reports WILLIAMSPORT — The Lycoming County Commissioners and Department of Public Safety have been ...

Stand your distance in store lines