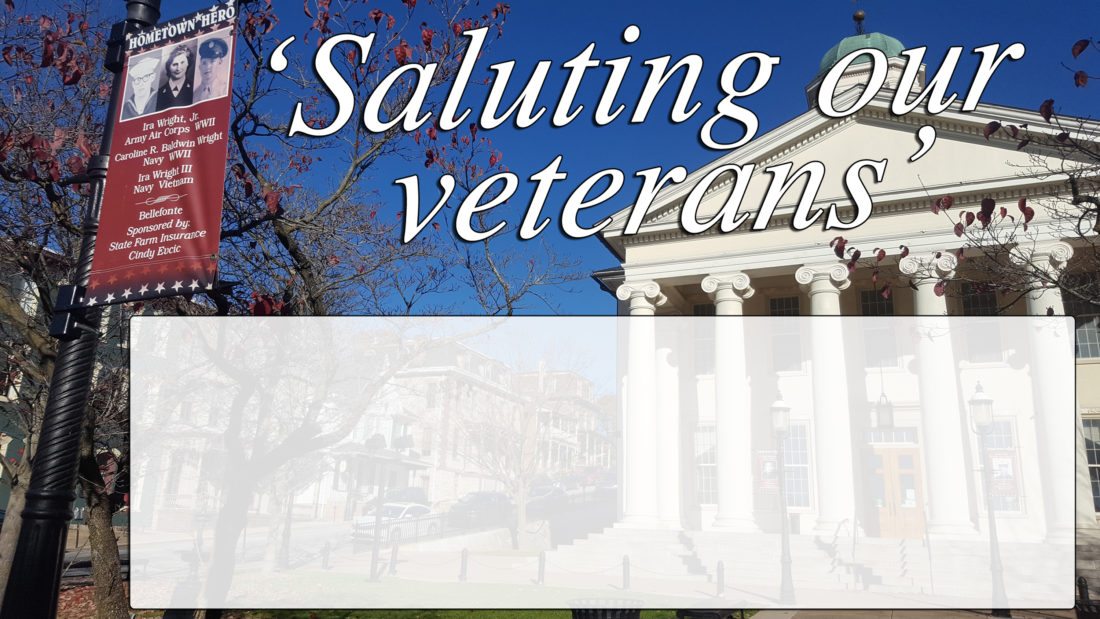 BELLEFONTE — One hundred and fifty-nine veterans will be honored for their service as part of the second round of the Bellefonte Hometown Hero program.

On Saturday, the Bellefonte V.F.W. Post 1600 will be hosting its annual Veterans Day ceremony in front of the Centre County Courthouse to honor area veterans. Following the ceremony will be the second biannual unveiling ceremony of the Bellefonte Hometown Hero Streetlight Banner Program.

The event will start at 11 a.m. with the firing of the cannon by Gary Hoover, executive director of the Bellefonte Area Inervalley Chamber of Commerce, followed by an introduction by Andy Hillegass, master of ceremony, and the invocation. Hillegass, a Korean War U.S. Army veteran, currently serves as adjutant for the Bellefonte V.F.W.

Following the invocation will be a rendition of “The Star-Spangled Banner” and a speech by Frank Vicente. Vicente is a U.S. Air Force veteran of the Vietnam War.

Following Vicente’s speech, there will be an Honor Guard salute on behalf of the Bellefonte V.F.W., placing of the ceremonial wreath on the Soldier’s Monument, and a rendition of “Taps” that will be performed by the Bellefonte Area High School marching band. Afterward, the Hometown Hero names will be read and courthouse lawn banners will be unveiled.

After the ceremony, families and banner sponsors will proceed downtown to unveil the remaining banners. The banners will remain displayed on the town’s streetlights for the next two years.

During the first two years of the program, there were 92 banners that honored 101 veterans displayed throughout downtown Bellefonte. For the next two years, there will be 153 banners displayed, 85 of which will be new.

The Hometown Hero program is made possible through a partnership between the Hometown Hero Streetlight Banner Committee, consisting of seven community volunteers, Historic Bellefonte, Inc., and the Centre County Veterans Affairs Office.

The program was brought to Bellefonte in 2015, after committee member Renee Brown, who grew up in Lock Haven, attended Lock Haven’s Hometown Hero ceremony the previous year.

“I thought it was very representative of the community support for veterans, and then came to Bellefonte to see if they would be interested in supporting it,” Brown said.

Brown’s father was also a veteran and she had missed the Lock Haven program’s deadline to have a banner made to honor him. Her father, Boyd James Butler, served in World War II.

“It is important that we continue to honor and remember our veterans,” Brown said.

Anyone interested in volunteering with the 2019 Bellefonte Hometown Hero Streetlight Banner Program can contact Renee Brown at 814-355-2917.