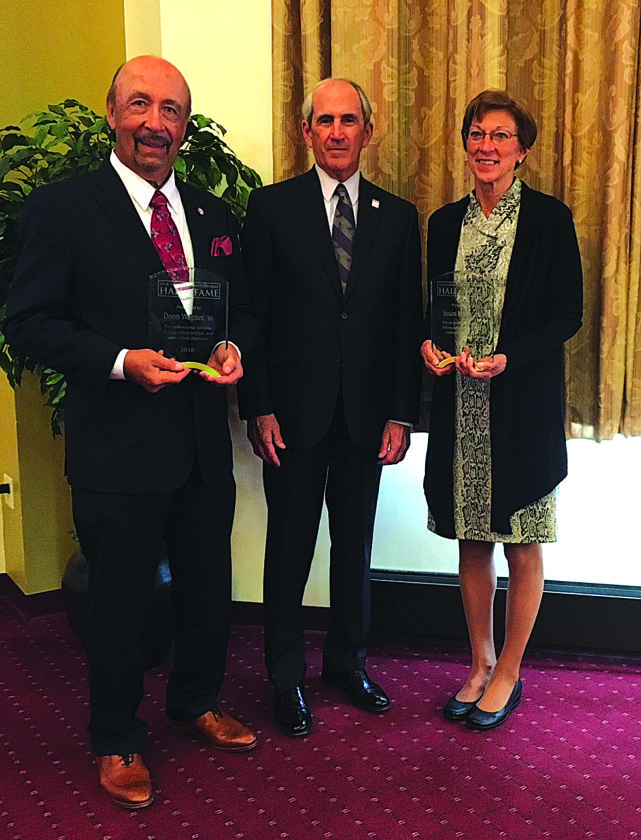 LOCK HAVEN– Lock Haven University recently inducted two alumni into the Business Hall of Fame during a ceremony and luncheon held in the Durrwachter Alumni Conference Center, Poorman Ballroom. The event was sponsored by PSECU.

Inductees honored during the event were Susan K. Myers, ’76, consultant for Corning Incorporated and audit manager, and Donn “The Swami” Wagner, ’66, founder of Alleghenies Analysis Ltd., The Victory Line hotline, and theswami.com website. The two alumni have distinguished themselves in business and in service to the university and their communities.

During her remarks, Myers said that she remembered being told that she could not become an architect, something she had dreamed of becoming, because she was a woman. Her father, recognizing her strengths, recommended she pursue a degree in computer science at LHU. After obtaining her bachelor’s degree at LHU, she went on to earn a Master of Business Administration at Syracuse University and has had many successes in her professional and personal life along the way. “Little did I know years ago, that I would be traveling the world,” she said.

Wagner, crediting his wife for most of his successes, drew on similarities between the LHU Business Hall of Fame and the Major League Baseball Hall of Fame. He presented three gifts during his remarks: A baseball glove to his wife, for being “the best catch I ever made;” a baseball bat to his son, for always having his back; and a baseball to Fiorentino, in appreciation of his LHU education and Fiorentino’s time as university leader. “This university has had a great impact on my life,” Wagner said. “It provided an environment where I was able to flourish.”

Business Advisory Board member, Stephen Babcock, ’88, emceed the event, and Business and Computer Science Department Chair, Dr. Cori Myers, ’91, gave remarks about the tremendous accomplishments each inductee has made to their profession and communities.