Flooding a danger all week 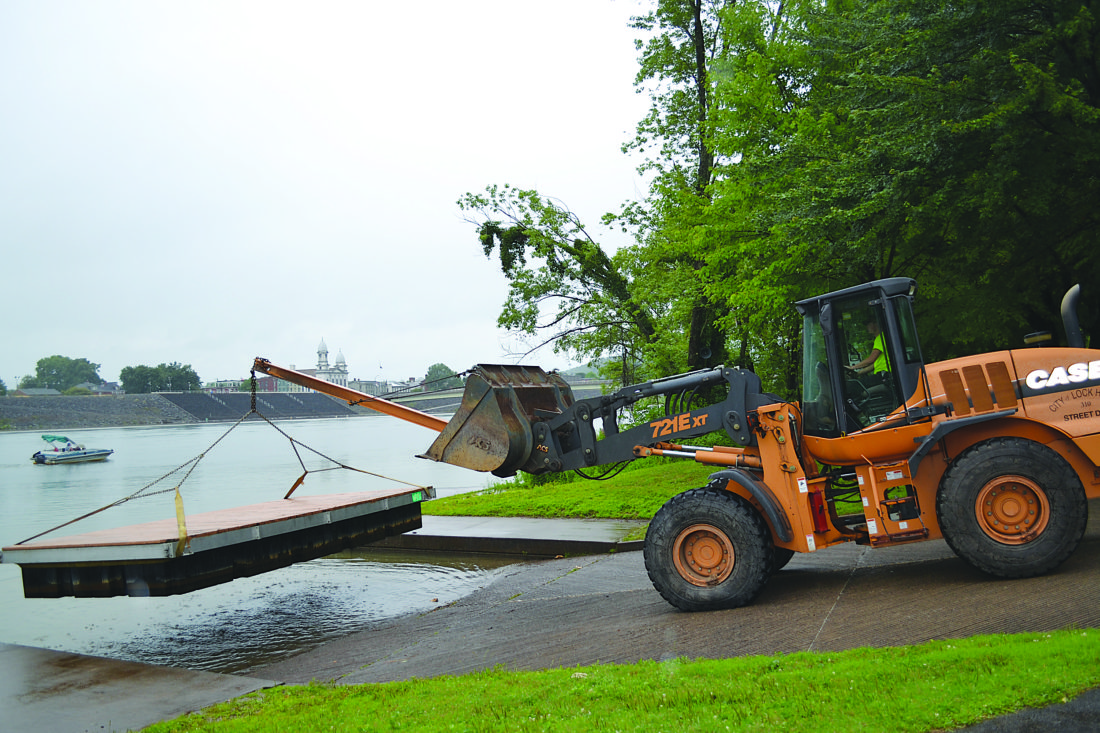 SARAH PAEZ/THE EXPRESS As it poured rain on and off Monday and the Susquehanna River level rose quickly, workers from the City of Lock Haven removed the floating stage from the water that afternoon. They made four trips until all sections of the stage were on dry land in Lockport Boat Launch Park in Woodward Township. Also, local boat owners told The Express they felt they needed to remove their boats due to the prediction of high water. As of Monday afternoon, the river had risen to 10.5 feet, but the National Weather Service predicted it would rise higher. NOAA called for a crest of close to 15 feet, to be reached at mid-day Thursday, so the city took proactive steps and pulled the stage, City Manager Gregory J. Wilson said. Emergency protocol is to remove the stage at 15 feet, due to the mechanics of how it is anchored, he said. The predicted crest is still several feet lower than a level that would cause the city to take flood actions, he said. If the river level drops enough by the weekend, the stage will be installed at the Corman Amphitheater again, Wilson said, in time for the concert by Big Daddy Bangers at 6:30 p.m. Sunday.

LOCK HAVEN — Slow-moving, drenching rains look to continue in our area through Wednesday, according to most weather forecasters.

The rain, which is moving generally from south to north, is capable of causing spot flash flooding as storms train over the same area for prolonged periods of time, forecasters with the National Weather Service say.

What’s more, Accuweather is calling for an additional three inches of rain Tuesday and Wednesday, but is predicting that some spots will get more than that from heavy downpours.

Accuweather also reports Lock Haven as having received .42 of an inch of rain on Saturday, and .23 of an inch on Sunday.

Unfortunately, due to the south-north and slow-moving nature of the storms, different geographic areas can be affected quite differently.

Meanwhile, Bellefonte received .42 of an inch of rain on Saturday, and .78 of an inch on Sunday, with about 2.5 inches expected through Wednesday.

Based on predicted rainfall, a Flash Flood Watch was issued through Wednesday night in Central and Eastern Pennsylvania.

That means the Clinton and Centre County Emergency Communications centers are going to be busy. Similarly, Pine Creek could see flooding, with the crest at Cedar Run forecast for 8.8 feet late Wednesday, above the “action” level of 7 feet.

And while the level of the West Branch of the Susquehanna River at Lock Haven was hovering just under 9 feet on Monday, NWS predicted it to jump to 14.8 feet by Thursday late morning (at least that was the prediction as of late Monday afternoon).

Later Monday, however, it revised the river crest at Lock Haven to 13.3 feet at Thursday morning.

The fluctuation just reveals the volatility of the forecast. Many boaters along the river at and near Lock Haven were having none of it. Dozens of boaters removed their watercraft from their rented or owned properties throughout the day Monday. Some also pulled out their campers.

The NWS lists 17 feet at Lock Haven as the “action” stage … meaning homeowners in low-lying areas or people with seasonal properties should take heed. Flood stage here is 21 feet. At Renovo, the river was predicted to rise to over 9 feet by Thursday late morning … with flood stage at 12 feet.

“Following a few days of heavy rainfall, additional heavy showers and thunderstorms with heavy rain will continue to stream north and train over some of the same locations today through Wednesday. The soil is very wet and streams are running high. The expected additional heavy rain of up to several inches in some locations could cause flooding in very short order,” Accuweather said.The inclement weather has already had effects throughout Pennsylvania.

On Monday, Hershey Park announced it was closing both the park and Zoo America “for the safety of our employees and guests.”

Tremont Township in Schuylkill County, near Pottsville, has reported significant flooding, with images of roads turned into rivers spreading across social media.

The effects of the rain will likely be felt for several days, even after the rain stops — as the rain moves northward, it will add to the downstream flow and could cause further flooding.

Furthermore, the softened, wet ground can cause issues as trees sink and uproot, potentially falling across roads and electrical wires. In fact, several trees were already downed on Sunday, according to the Clinton County Department of Emergency Services.

Officials warned motorists to be cautious of flood waters when driving, and to not attempt to enter areas with standing water on the road. A horrifyingly small amount of standing water can cause your vehicle to lose traction.