CAROL TERRACINA HARTMAN For The Express 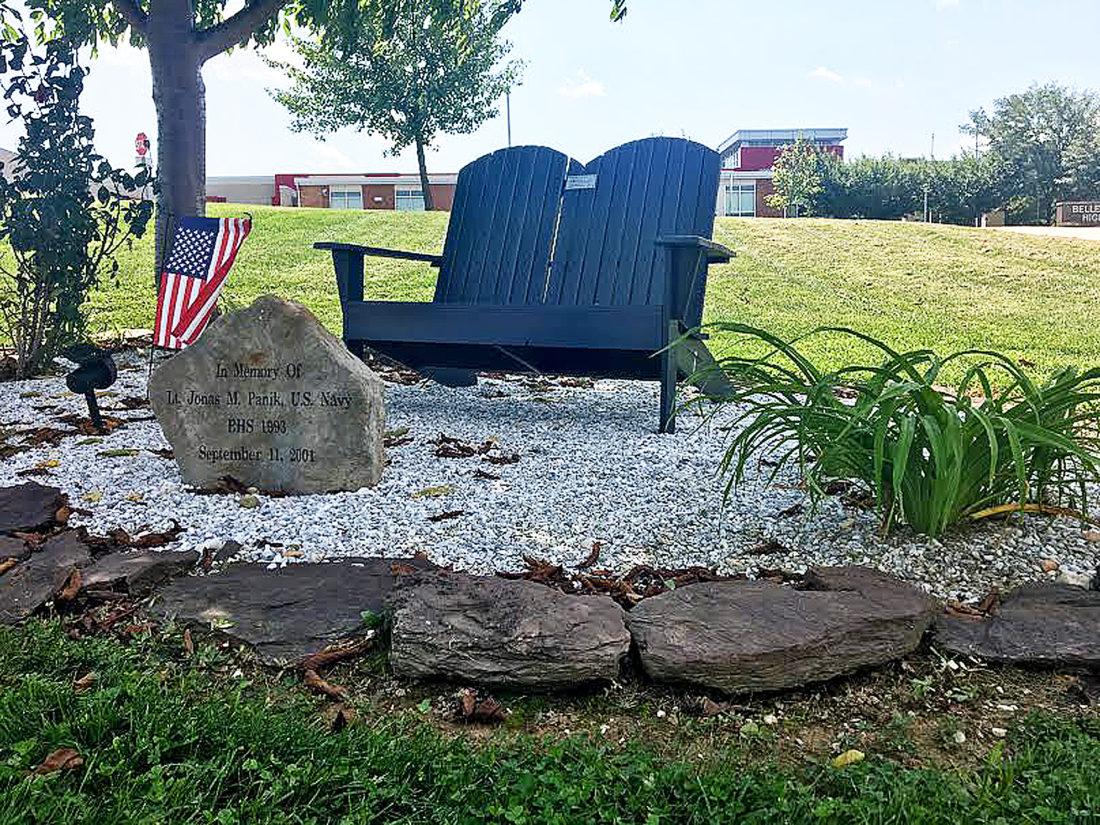 PHOTO BY BRIT MILAZZO An American flag waves over a stone marker with the words “In Memory of Lt. Jonas M. Panik, U.S. Navy BHS 1993 September 11, 2001.” A two-seater Adirondack chair offers visitors a moment to pause and remember.

BELLEFONTE – Bellefonte Area High School will honor one of its own today, as our nation, communities and families gather to commemorate lives lost, lives saved, and the heroism of our first-responders on September 11, 2001.

Navy Lt. Jonas Martin Panik, a 1993 graduate of Bellefonte High, died in the attack on the Pentagon, in Arlington, Va.

Shortly after graduation, he enrolled in the U.S. Naval Academy, graduating with a degree in history in 1997. Soon after, he married Jennifer Dallas, of Hanover, Md. He was commissioned as an Ensign in the U.S. Naval Reserve and after completing a Naval Intelligence Officer’s Basic Course, the couple moved to Whidbey Island, Wash., where he was assigned to “the Grey Knights” Patrol Squadron 46 for two years, according to Pentagon information. This tour saw him complete deployments to the Arabian Peninsula and Western Pacific Rim.

After those two years, the couple returned to Maryland and Panik began his assignment as a flag intelligence briefer, “because of his superior skill and dedication,” according to a biography on the National 9-11 Pentagon Memorial.

At 9:37 a.m., the moment American Airlines Flight 77 hit the Pentagon, Bellefonte High students, teachers, administrators, and staff will pause. After observing a moment of silence, students will listen as Principal Michael Fedisson reads a short speech on Panik — his football career, graduating from the Naval Academy, marrying the love of his life, their rescue dogs, Jasper and Logan, and working as staff of the Chief of Naval Operations in Intelligence Plot as he began his graduate program through the Naval War College.

He is among 125 people who died inside the Pentagon building as five hijackers took over and flew Flight 77 into an outer ring on the west side. Another 58 passengers, four flight attendants and two pilots died in the crash.

“There is a local connection,” Fedisson said. “We make it real for the students.”

Several memorials within district schools have been created. At the high school, a quiet place contains an American flag that waves over a stone marker, reading “In Memory of Lt. Jonas M. Panik, U.S. Navy BHS 1993 September 11, 2001.” A blue (Navy colors) two-seater Adirondack chair, landscaped with a mature tree and flowering plants, set off with white pebble ground-cover and a spotlight, offers visitors a moment to pause and remember.

The memorial’s design is the result of much heart-felt collaboration, according to Fedisson.

“Our vice principal (Dan Park) was teaching wood shop at the time,” Fedisson said. “He had a hand in that. Also, Patti Hillard, director of transportation at the time, is a longtime district employee. She serves as our local historian. She knew Jonas.”

Inside the school building is a Wall of Fame for alums who have died in service to their country. A tribute to Panik, alongside others, acknowledges this sacrifice.

At the Pentagon, a memorial dedicated Sept. 11, 2008, features cantilevered benches, each inscribed with a victim’s name, over a lit pool of water. The benches stand on a gravel field, with those who died inside distinguished from those who died onboard the plane, according to National 9/11 Memorial information. Thirty crepe myrtle trees were planted around the memorial to provide shade for many years.

A Little League field in Howard where Panik played as a child and a quiet area at Walker Township Park in Mingoville where he was born both bear memorials to their fallen hero.

For many old enough to recall the events of Sept. 11, 2001, the question, “Where were you?” doesn’t take long to answer. For Fedisson, then enrolled as a student at Lock Haven University, the memory remains clear.

“I just remember going down to the student union at that time – all the rumors flying and everyone trying to get information,” he said. “We were all thinking, ‘What’s going to happen next?'”

In the classroom, social studies teacher Michael Maney assigned students a writing task: record everything about that day — essentially, write down every detail of sights, emotions, sounds, questions, answers. As time passes and classes of students become too young to recall the 9/11 terrorist attack, he assigns students to interview someone who was at least 18 years old that day.

Now, Fedisson said, Maney pulls out those original writings and has today’s students read what their peers saw and felt on that day. Class discussion centers on comparison with other milestone attacks, such as Pearl Harbor.

“They compare the events and ask if both events would truly be days which will live in infamy, or if these events fade away in history as emotions fade away and younger generations were not alive during the event,” Maney said in a press release.

The literature of that time is used in the English classes. Students read a transcript of then-President George W. Bush’s address to the nation and analyze what might make it effective or powerful.

Similarly, students read an editorial in The New York Times titled “The War Against America: An Unfathomable Attack.”

English teacher Kaysey Beury says the editorial had a profound impact on her at first read.

“I use it to show how great writing can evoke great emotion,” she said in a press release on the district website.

A resident writing to The Express in September 2016 shared that she also was in the Pentagon on Sept. 11, 2001. She shared a career path with Panik in the defense intelligence area, but did not know him personally.

On Sept. 11, 2016, she visited his bench at the Pentagon memorial, taking a moment to lay flowers and pray for him and our nation.

“A small gesture, I know, but it’s the least I can do to honor a hero and patriot from Centre County, with whom I had so much in common,” wrote Carroll Smith Lee.

“I share these thoughts because I believe it is important to remember Jonas’s sacrifice, dedication to his country and the inspiration his life and his memory can have on the children and adults of Bellefonte and Centre County,” she wrote.

For more information on the Bellefonte Area High School’s remembrances for Sept. 11, 2001, see www.basd.net, under “School News” tab. Read how faculty shared their memories of “where were you” the day of the attacks.

For more information on the attack on the Pentagon or the memorial, see www.pentagonmemorial.org