FILE- In this July 18, 2012, file photo, wheat harvest is in full swing near Patterson, Wash. The trade war with China is making life difficult for many farmers across Washington state. Washington State stands to lose $480 million in agricultural exports to China because of retaliatory tariffs, according to the state Department of Agriculture. (Paul T. Erickson/The Tri-City Herald via AP, File)

A protester is lifted off of a chair by U.S. Capitol Police while standing on it and shouting during testimony by President Donald Trump’s Supreme Court nominee Brett Kavanaugh on the third day of Kavanaugh’s Senate Judiciary Committee confirmation hearing, Thursday, Sept. 6, 2018, on Capitol Hill in Washington, to replace retired Justice Anthony Kennedy. (AP Photo/Jacquelyn Martin)

Bill Feerrar of Clean Air Technology talks to the board.

Lynn Stutzman of Coccardi and Associates talks to the board.

In this June 24, 2018 photo released by NASA, the Russian Soyuz MS-09 crew craft, left, and the Northrop Grumman (formerly Orbital ATK) Cygnus space freighter are attached to the International Space Station. NASA and Russian space officials stressed Thursday, Aug. 30, 2018, that the six astronauts are in no danger after a small air leak developed in one, at left, of the two Soyuz capsules docked at the space station. Russian officials say the leak was detected Wednesday night and may be the result of a micrometeorite impact. Both the crew and ground controllers are working hard to isolate the leak. (NASA via AP) 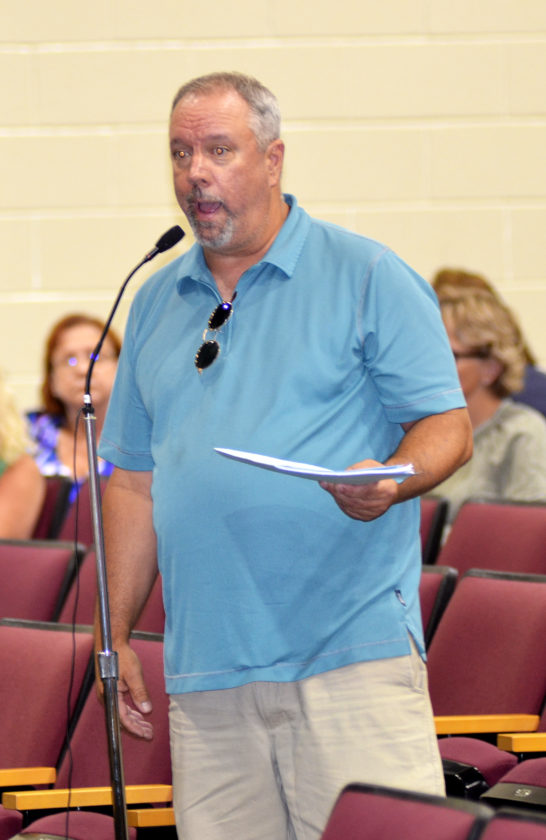 Bill Feerrar of Clean Air Technology talks to the board.

“The levels in those rooms were not health threatening,” mold expert Lynn Stutzman, of Coccardi and Associates, explained to the gathered citizens, staff, and board members at last night’s Keystone Central School Board meeting.

Stutzman and fellow mold expert Bil Feerrar, of Clear Air Technology, spoke before the school board, providing their knowledge and experience to the board members and the public, who were allowed to freely ask questions without a sign-up sheet, in an unusual move that was itself a testament to the level of seriousness with which the school board reacted.

In advance of their presentation, Dr. Alan Lonoconus, the district’s superintendent through the end of the school year, stated that he was “happy to report that we’re moving forward with remediation. We expanded our area of testing in the two buildings, but we are not seeing any excessive levels beyond those two initial classrooms.”

Lynn Stutzman of Coccardi and Associates talks to the board.

According to Dr. Lonoconus, Keystone Central doesn’t have mold problems “as extensively as many area school districts. We have now contracted a company to come in and scrub those two classrooms, as well as to conduct air purification.”

From there, Feerrar and Stutzman took the floor.

“I was asked by the board to perform baseline air testing at all nine schools,” Feerrar began. “Out of all the samples that I conducted, 2 came back just slightly higher than I was comfortable with for just one species of mold spore, penicillium aspergillus.”

The testing process consisted of first taking a baseline outdoor air sample at each school. From there, samples were taken throughout the buildings.

“The hope is that you won’t have too much of an elevation of your inside samples compared to your outside samples,” Feerrar said. “Then you have to ask why is the inside count higher than outside atmosphere.”

“Mold levels change on a daily basis, and the higher the humidity, the more mold grows,” he continued, and said that “all the outside samples were already pretty high.”

But Feerrar didn’t feel comfortable with what he found in the samples from the two rooms in question, which he noted to property services supervisor Barry Hackenberg. From there, a recommendation was made to the school board to close the schools so the specialists would have the freedom to take a thorough look.

“We checked outside of those rooms – conducted those tests yesterday, overnighted them, and just got the final results. Everything around those areas – an entire wing, basically, everything checked out just fine,” Feerrar confirmed.

Both men commended the school district, praising the board members for going “above and beyond” to protect the students and staff, as “some districts might not have even closed.”

Board President Charles Rosamilia stated that “We have budget problems – that’s not news to anybody. But we’re not going to sacrifice the kids’ or staff members’ health. We had to take action, even if some might say that the action we took wasn’t necessary.”

“We wanted to err on the side of caution,” Rosamilia also said.

Feerrar said that was wise, noting that “Some other area school districts are paying over $1 million in remediation.”

Upon questioning, Feerrar said that the maximum “acceptable” level for spores was 750 per cubic foot. “These rooms had 800 spores per cubic foot,” he said of the flagged rooms.

“There are schools dealing with spore counts in the thousands,” he continued, “but even then, those are not necessarily health infringing levels.”

Stutzman agreed, saying that he’s “been exposed to black mold upwards of 200 times” in the course of investigation, identification, and remediation, but he’s “never had any health problems” from it.

“Mold treatment isn’t a hard science,” Stutzman said – ” There are no defined bad levels, because you have to look at the outside and compare it to the inside.”

“In Pennsylvania, in the outside air, average spore counts for penicillium aspergillus range from 300 – 1500,” Stutzman stated.

He also said he believes this to be an “isolated incident” as the buildings are “very well maintained.”

Upon his investigation, he “did not find mold to be growing anywhere beyond the two areas they had already found.”

For now, treatment will begin.

Over the next few days, the experts said, the remediation company hired by the district will go into those two rooms, and use a combination of non-bleach-based, safe fungicides alongside industrial-strength air purification units to purge the affected rooms.

Beyond that, another round of tests will confirm or deny whether the mold has been expunged, after which the administration can determine the re-opening date for the schools, the experts forecasted. They would like to re-open on Tuesday, Sept. 11, however any return date is contingent upon the results of the next round of testing.