LAURA JAMESON/THE EXPRESS Tina Gallo and Coreen Miller are thankful for both Mark Baiada’s kind gift and their friendship that began five years ago when Gallo first began working at BAYADA.

BAYADA employees excitedly receive their envelopes that would tell them what percentage of $20 million they would earn.

AP Photo/Gregory Bull People hold hands in prayer during a protest near the border with Tijuana, Mexico.

AP Photo/Jean-Francois Badias Residents react during a gathering being held in a central square of the eastern French city of Strasbourg to pay homage to the victims of a gunman who killed four people and wounded a dozen more.

This April 9, 2015 photo provided by Lockheed Martin shows the first GPS III satellite being built in a clean room at Lockheed Martin’s complex south of Denver. The satellite is scheduled to be launched from Cape Canaveral, Fla., on Tuesday, Dec. 18, 2018. (Pat Corkery/Lockheed Martin VIA AP)

AP Photo/Steven Senne A high school student uses a vaping device near a school campus in Cambridge, Mass. Twice as many high school students used nicotine-tinged electronic cigarettes in 2018 compared with the previous year, an unprecedented jump in a large annual survey of teen smoking, drinking and drug use. 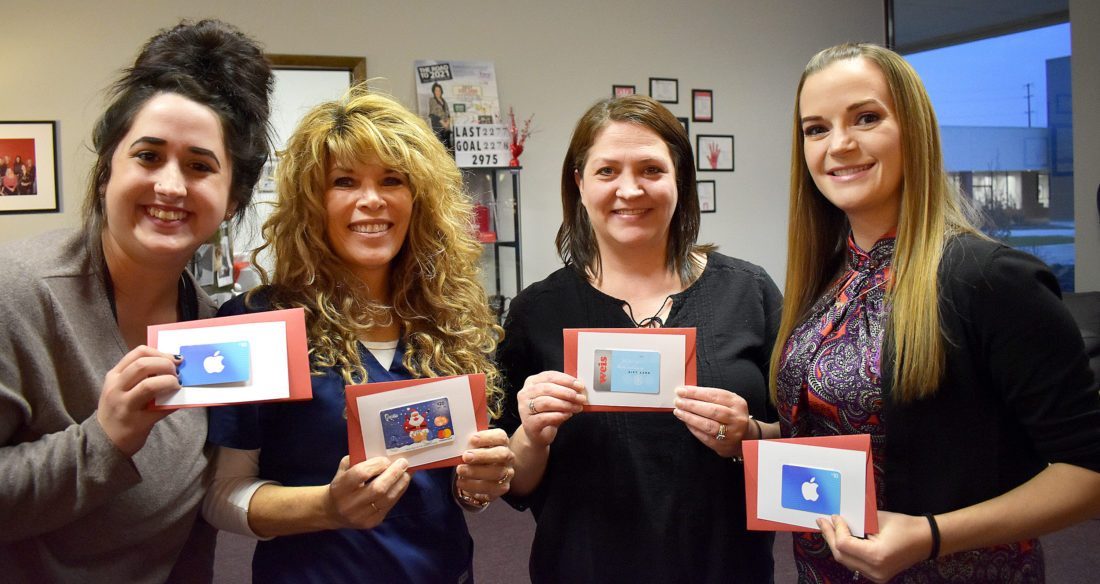 BAYADA is currently transitioning into a nonprofit in 2019 and Baiada wanted to thank his employees for everything they do.

“As I work to transition BAYADA into a nonprofit and take the next step in the evolution of our company, I have spent a lot of time reflecting on what has gotten us to this point, and what I am particularly thankful for, which is our dedicated team of home health professionals,” he said during a lunch with 100 employees at the Bellevue Hotel in Philadelphia. “This gift is a token of my appreciation, in hopes that it helps every BAYADA employee to understand just how important they are to BAYADA and to our Lasting Legacy vision of being the world’s most compassionate and trusted team of home health care professionals.”

It was at this lunch that Baiada announced he would be gifting each of his employees a percentage of $20 million.

On Thursday night a large portion of BAYADA’s Clinton County employees, both office and field agents, gathered at their office at 1 Outlet Ln., Lock Haven to enjoy a Christmas party as well as learn what Baiada gifted them. 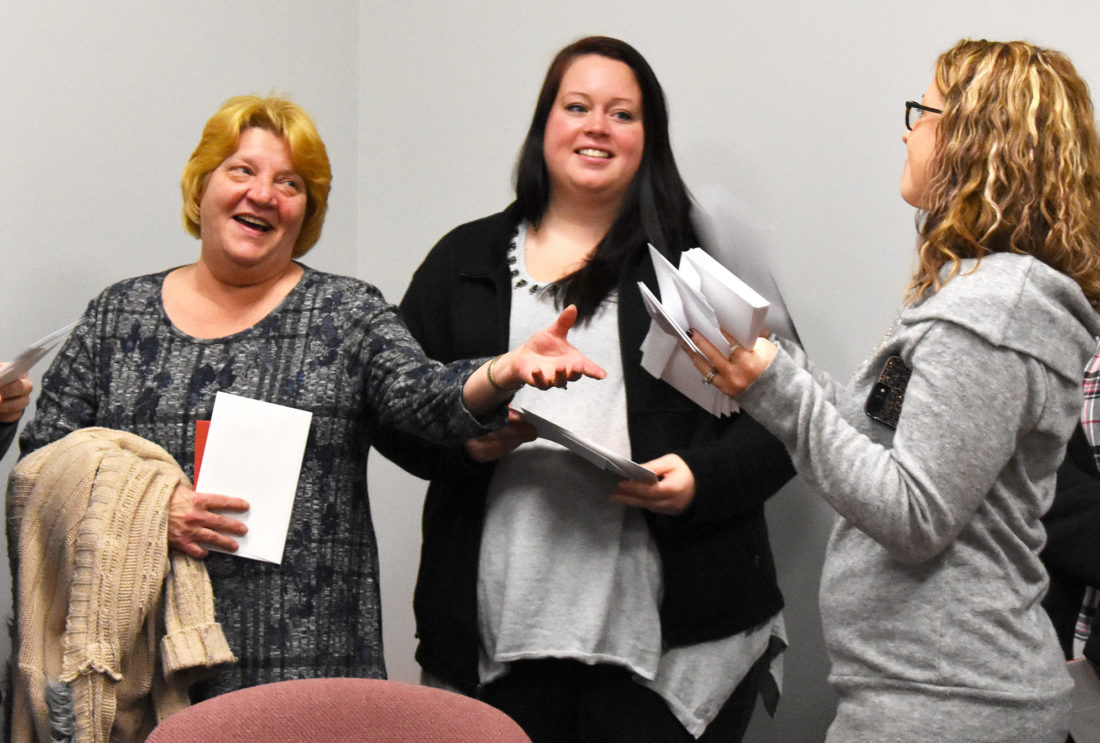 BAYADA employees excitedly receive their envelopes that would tell them what percentage of $20 million they would earn.

“It’s wonderful … I’ve been crying ever since,” Michelle Anderson, a CNA who’s been employed with BAYADA for a year, said with tears in her eyes.

Anderson has been a CNA for 20 years and said she never felt quite as cared for as she has while working for BAYADA.

“I’ve never felt this kind of acceptance,” she said. 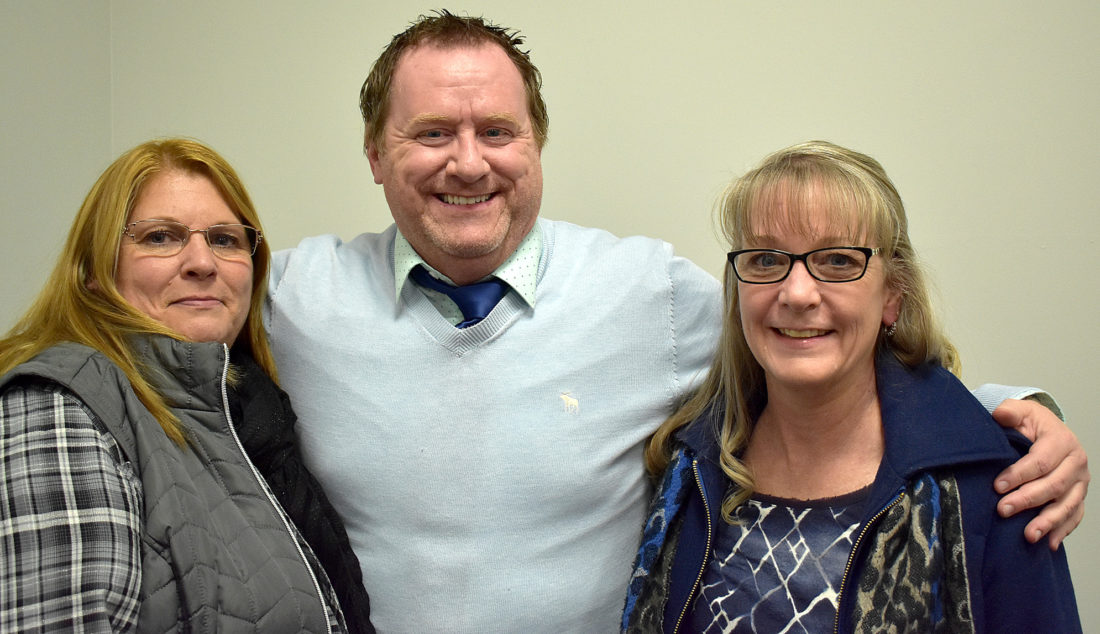 Gallo and Killinger actually became friends thanks to their work through BAYADA when Gallo began working with the company five years ago.

They now spend a lot of time together outside of work including going Black Friday shopping together.

During the party BAYADA Director William Winder made the event leading up to the big reveal full of fun.

He began by first handing out red envelopes with gift cards to various businesses such as iTunes, Walmart or Amazon.

Before they opened them however, he had them form a circle. The employees had to pass the envelope in their hands to their left or to their right while he read them a Christmas themed story.

The number of days each employee received depended on how many hours they worked throughout the year, Winder said.

Afterwards, Winder asked everyone to join him in the conference room so he could replay the moment Baiada announced he’d be gifting his employees bonuses. 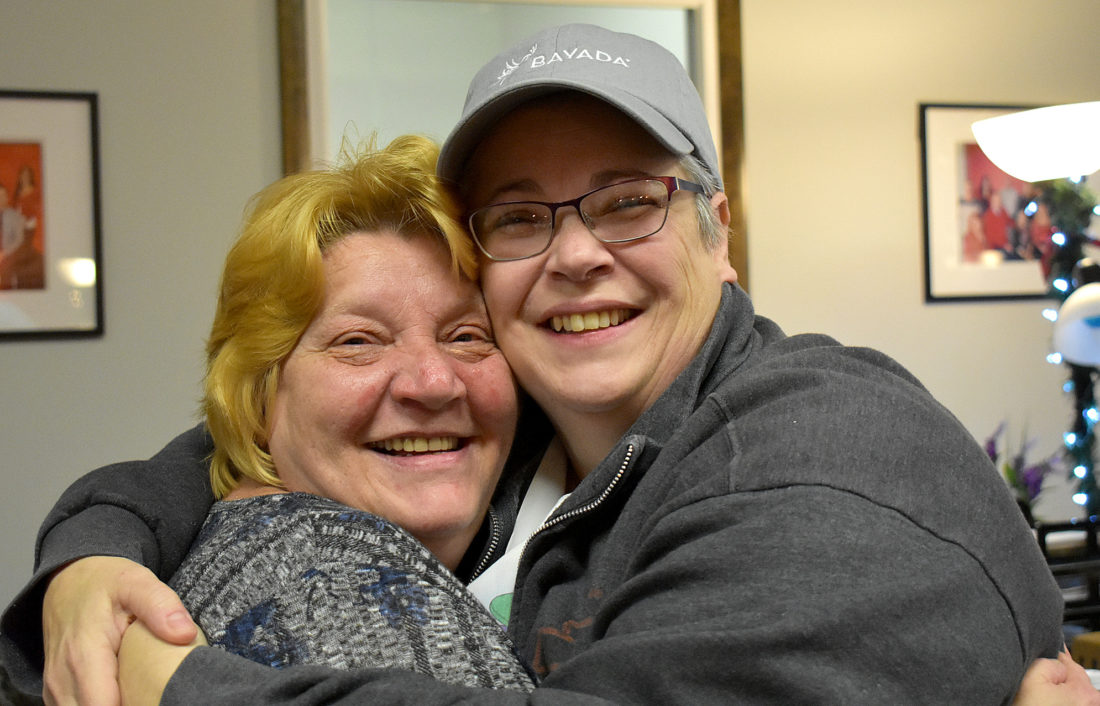 LAURA JAMESON/THE EXPRESS Tina Gallo and Coreen Miller are thankful for both Mark Baiada’s kind gift and their friendship that began five years ago when Gallo first began working at BAYADA.

Winder explained he and other office employees had been sitting in that very room on Nov. 21 when they first heard the news.

None of them could believe the news, he said.

“Maintaining a truly impactful and lasting legacy for BAYADA starts with our great people, who embody our core values and contribute to and maintain our unique mission-driven culture,” Baiada said in the video. “I am honored to be able to pass on my gift of gratitude to these deserving employees and am excited for what the future holds for all of us with the nonprofit transition.”

After the video, Winder began handing out envelopes which would list the amount each employee would receive.

Many tears of joy were shed and hugs were plentiful as each employee opened their letter. All of them still a little shocked it was actually happening.

Sandi Miller and Lana Schneider hugged each other, happy tears in their eyes, clearly grateful for the founder of BAYADA.

Both women have been employed by BAYADA for years and were more than happy to tell stories of the children they care for, clearly proud of them.

It was a night filled with laughter, joy and a lot of appreciation for a kind hearted founder and his gift of gratitude.