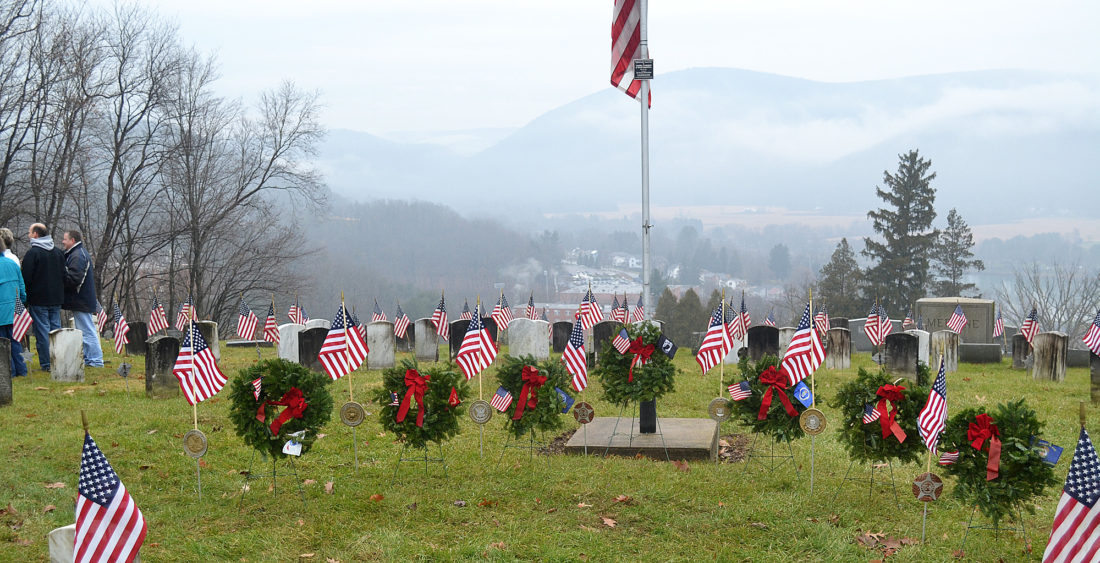 JOHN RISHEL/THE EXPRESS Each and every one of the 150 veteran burial sites at Soldiers Circle were honored with evergreen wreaths.

LOCK HAVEN — Each December, the Wreaths Across America organization coordinates wreath-laying ceremonies at more than 1,400 locations across the United States, at sea and abroad.

On Saturday, Highland Cemetery participated in National Wreaths Across America Day, decorating the burial sites and honoring the lives and contributions of the 150 veterans in the cemetery’s “Soldiers Circle.”

“Highland became part of the National Wreaths Across America program in 2017. We did not promote it much as we did not know if we had any donations of wreaths. It ended up that we did. This is another NWAA event that Highland is proud to be a part of,” said David Wallace, the cemetery manager at Highland, who helped coordinate the event.

General Dynamics SATCOM Tech, a State College-based company that manufactures satellite equipment for service and commercial entities made what was reported to be a $1,000 donation towards providing wreaths for the ceremony.

I have been gathering and purchasing wreaths since 2011 and decorating Soldiers Circle myself. We made them from real pine and coat hangers. Over the years I have obtained about 80 wreaths. This will enable us to place a wreath (real or artificial) at the tombstone of each of the150 veterans at Soldiers Circle,” Wallace said.

Local veterans Terry Banfill and Don Hills were on hand as Honor Guard to present the colors as the event got underway.

A prayer was said by Cindy Love, followed by a rendition of the National Anthem by Jennifer Oldt.

“We are not just here to decorate grave stones and focus on the deaths of these veterans. It is an opportunity to honor them, their lives and sacrifices and their contributions. Across the country there are a thousand memorial sites just like this. We are proud to live in a free society, but freedom comes at a price,” Oldt said.

Colonel Thomas Motel, a retired veteran of the United States Army, was on hand to present Wallace with a commemorative coin given out for excellence.

“These brave souls fought to preserve the American dream. We honor them with evergreen wreaths. They chose to something bigger than themselves. We are a better nation due to their sacrifices. The best we can do is remember them and honor them in our thoughts, prayers and actions,” Wallace said. 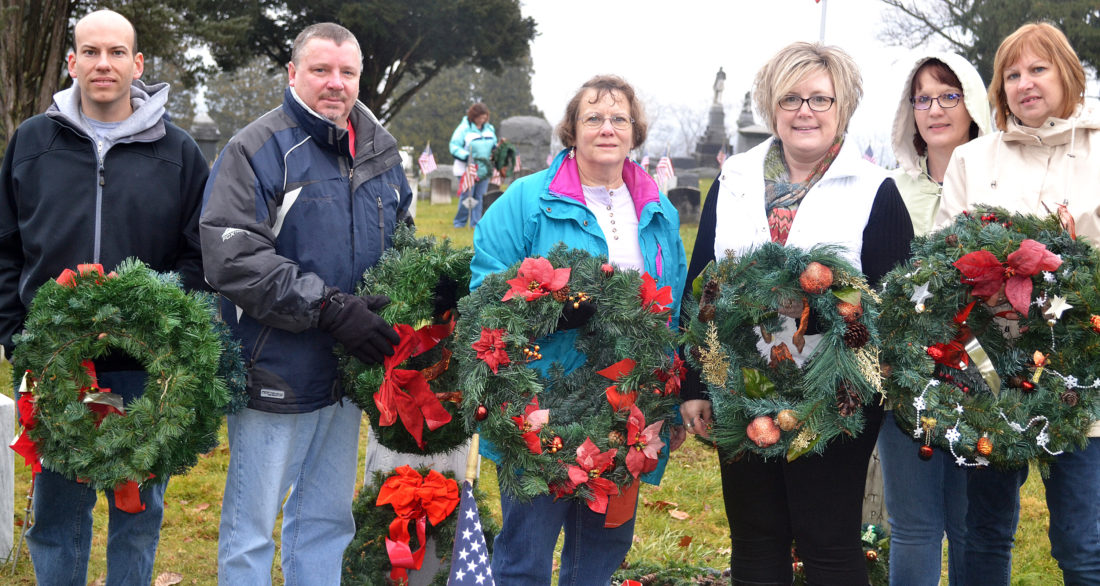 JOHN RISHEL/THE EXPRESS Several representatives for General Dynamics SATCOM Tech, pictured above, were happy to provide a donation of wreaths to ensure all veteran gravestones were recognized as part of the ceremony.

Stephanie Borowicz, the newly elected state representative of the 76th District was in attendance, giving a brief comment to the crowd before the ceremony got underway.

“It is an honor to be here. These are the real heroes. Thank you for doing this and letting us be here to honor our veterans,” Borowicz said.

Then, each person in attendance was encouraged to take a wreath and place it on a veteran’s grave and to say that veteran’s name aloud, taking a moment to thank them for their service to our country. This continued until each and every one the 150 veteran burial sites in Soldiers Circle were decorated, and the sacrifices of each and every 150 veterans were recognized.

The wreaths Across America Foundation was started by founder Morrill Worcester, owner of Worcester Wreath Company of Harrington, Maine. When Worchester was a 12-year-old boy he won a trip to Washington D.C. His first trip to our nation’s capital was one he would never forget, and Arlington National Cemetery made an especially indelible impression on him. This experience followed him throughout his life and successful career, reminding him that his good fortune was due, in large part, to the values of this nation and the veterans who made the ultimate sacrifice for their country.

In 1992, Worcester Wreath found themselves with a surplus of wreaths nearing the end of the holiday season. Remembering his boyhood experience at Arlington, Worcester realized he had an opportunity to honor our country’s veterans, according to the foundation’s website. 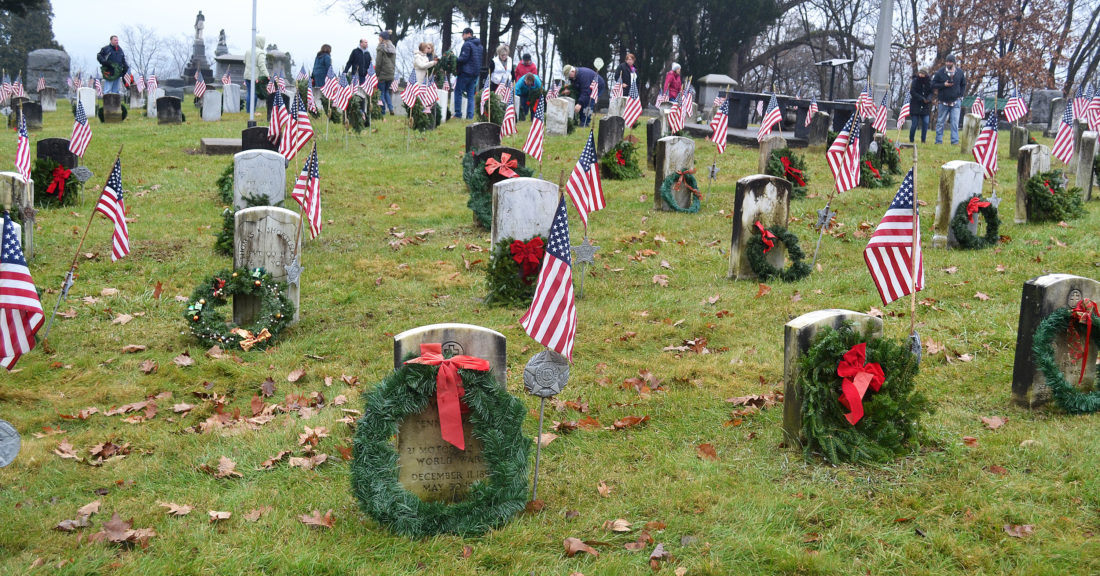 JOHN RISHEL/THE EXPRESS A close-up view of some of the wreaths placed in Highland Cemetery. 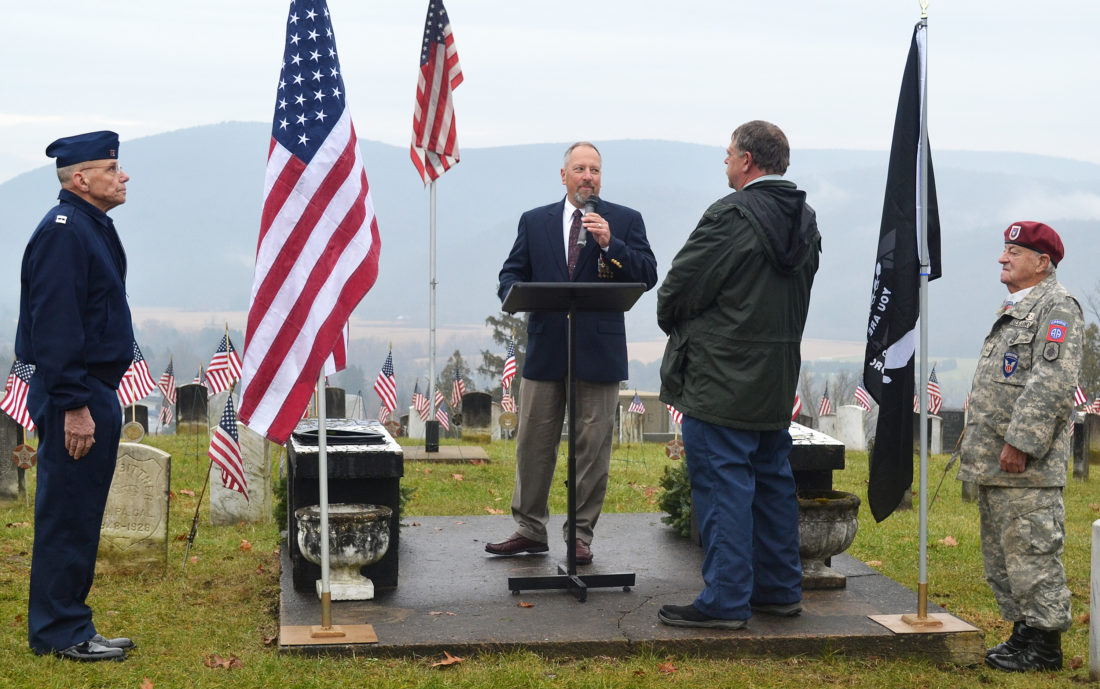 JOHN RISHEL/THE EXPRESS Colonel Thomas Motel, a retired veteran of the United States Army, was on hand to present Wallace with a commemorative coin given out for excellence.