LOCK HAVEN — It was exactly 150 years ago today — Monday, Feb. 8, 1869 — that the Clinton County Courthouse hosted its first meeting of the county commissioners.

Yesterday, the county recreated that big day, holding the weekly commissioners’ meeting at the stately courthouse at the corner of Water and Jay streets.

The commissioners typically hold their meetings at the county’s Piper Building adjacent to the city airport. But on this day, they convened in the large courtroom at the courthouse to celebrate the historic milestone. 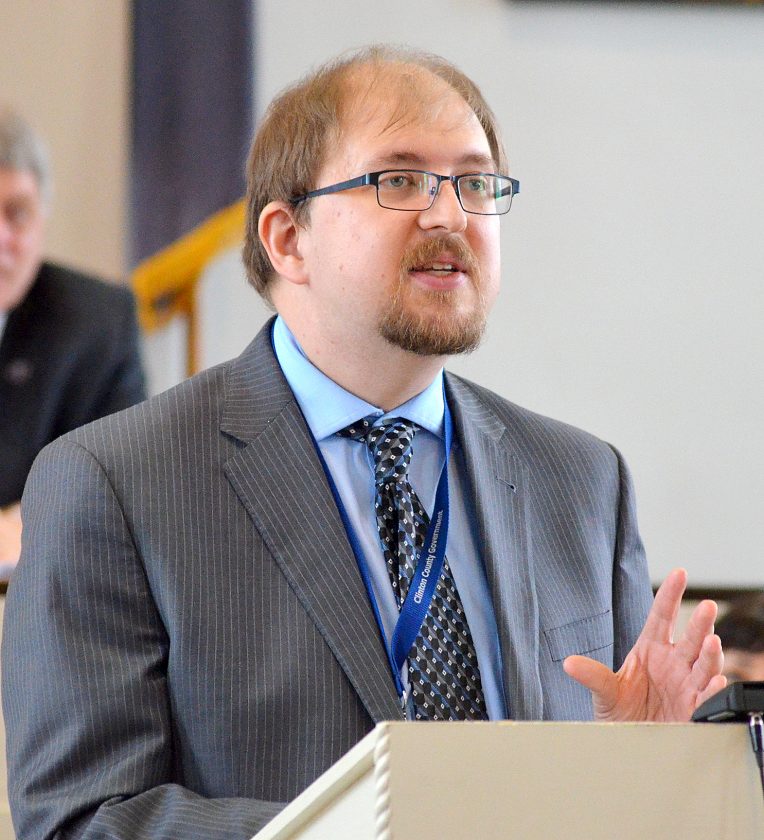 Attorney Justin Houser tells the crowd the history of the courthouse over the past 150 years.

On that historic day150 years ago, it was Commissioners A.J. Quigley, John Rishel and Tom M. Wolf who met to do county business. William H. Smith was county chief clerk.

“It is a special day for this esteemed building as we gather to celebrate its history. We have a light agenda to address … some things were put off until next week’s meetings due to time restraints. The focus of the discussion today will be the renovations coming to this building. We have some special guests today, and we thank the judge for allowing us this venue,” Smeltz said.

“The county has pledged to do extensive renovations to the courthouse this year and we are committed to a major project,” he said, noting the paint peeling from the ceiling. “There are many lessons I have learned in life, and one of them is that you can not paint multiple times over a tin ceiling. It just doesn’t work. The renovations will not take away from the historic design,” Miller said. 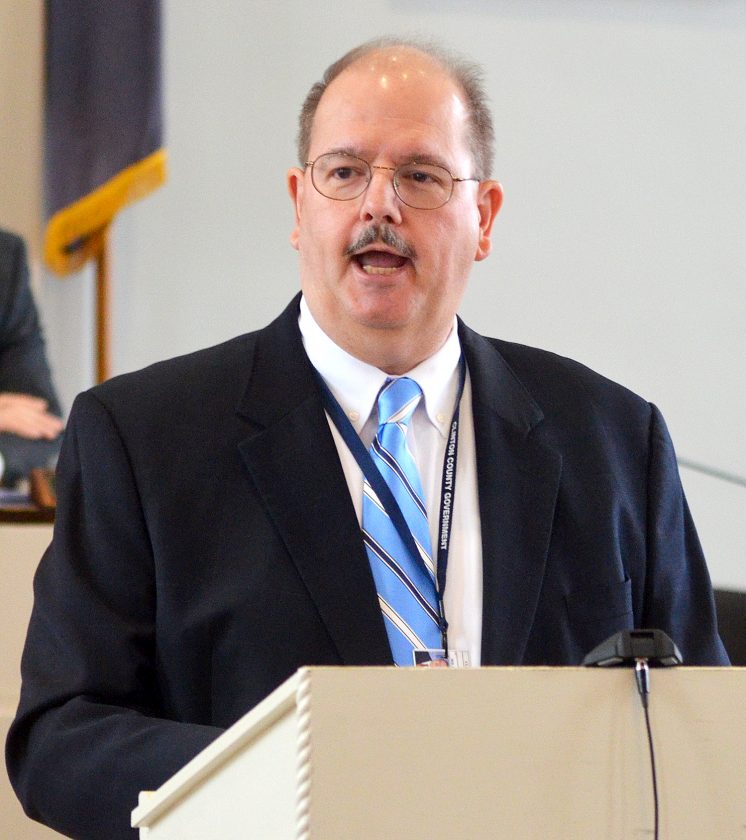 Judge Craig Miller talks about the past judges that worked in the courthouse.

Snyder compared falling paint chips to “the sensation of snow fall.” He said work will be done to the staircase, main entranceway, ceiling and floors.

Judge Miller recalled the days of his youth, when he first came into the courthouse as a Bucktail student and was “overwhelmed”, dreaming of the day he would preside over cases in that courtroom.

“It is the reason we go to law school, and I got to do that,” he said.

In many ways, the courthouse has withstood the test of time.

“This courthouse has survived several floods before the levee was built, even an earthquake. It has hosted many commissioner meetings, it has seen many great judges who have resided over many cases, and many great lawyers. This courthouse has served the community well and we take pride in a great building. We are excited to restore it to the grandeur it once was,” Miller said.

Attorney Justin K. Houser, of Coploff, Ryan, Welch & Houser, 136 E. Water St., was on hand to provide guests with a historical background of the courthouse.

“I see two primary reasons for celebrating today,” Houser said. “The first is that this building embodies the fact that Clinton County is a definite territory today, with its own seat for the administration of justice. This was hardly a given. Without the persistence of Jerry Church and his friends, a separate county with its seat at Lock Haven would probably not exist today.”

How far has the county come?

According to Houser, Col. Anthony Kleckner, of Loganton, who once opposed the formation of the county, came to be elected as one of its first commissioners. “Soon after his election, he rode horseback to Lock Haven, telling a bystander that ‘he had been elected county commissioner, had been directed to go to Lock Haven, and would be very much obliged if someone would tell him where Lock Haven was located.'”

“The first court was held in December 1839, in a building on Water Street known as ‘Barker’s Tavern,’ which was destroyed by fire in 1855. In 1842, the first building dedicated entirely to public use as a courthouse was built on the site of the present Robb Elementary School on Church Street. It was quickly outgrown. Between 1850 and 1860, as industries developed, our population increased by 58 percent. By 1858, the Clinton Democrat was calling the old courthouse a “miserable hen-coop.” Something needed to be done,” Houser said. 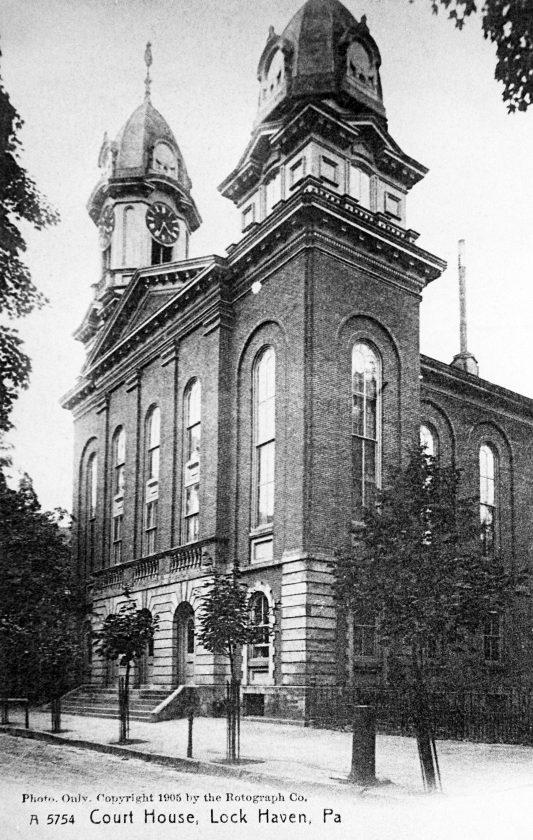 EXPRESS ARCHIVES Pictured is the courthouse over 100 years ago in 1905. It originally had a brick exterior until it was painted in recent years.

In 1861, however, the country fell into a Civil War, and it was not until the war ended in 1865, that the courthouse again became a matter of public concern, Houser said.

“In the spring of 1867, they received an offer of the land at the corner of Water and Jay, where the old “Clinton House” hotel once stood. On July 1, 1867 the commissioners adopted the plan for the new courthouse prepared by Messrs. Samuel Sloan and Addison Hutton of Philadelphia. The design is worth mentioning. The same architects designed the Venango County Courthouse, built in 1868, and the two courthouses are practically twins, with the only main difference being that the towers are reversed,” Houser said.

The contract for the construction of the courthouse was awarded to Col. A. C. Noyes, J. F. Batcheller, and Dr. Samuel Adams, for the sum of $93,000, according to Houser, who said county citizens were still paying off this debt via taxation as late as 1917.

“Construction was completed on Feb. 8, 1869, and the new courthouse was dedicated, with addresses given by Judge Charles A. Mayer and H. T. Beardsley, Esquire. The board of commissioners met for the first time at 10 a.m. in their office downstairs. At that first meeting, the minutes record simply said that ‘many orders were granted and bills passed – expenses of moving paid – as the order book will show – the Constables returns and Jury Bills were nearly all paid – The Juries were dismissed on Friday both Traverse and Grand and Court adjourned.’ With that the commissioners adjourned to meet the following week,” Houser said.

“The minutes of these meetings today are not what they used to be,” added Smeltz. “We have found so much interesting stuff over the course of our research.”

Many improvements were made to the courthouse over the years, according to Houser, including the installation of a clock in the tower that was accomplished in 1883, with the Seth Thomas Company performing the work, and the completion of several plans that involved creating more space.

“The second reason that we celebrate today is to honor the courthouse’s role in the administration of justice and the rule of law. This place is more than a landmark,” Houser said. “So much has happened here in the past 150 years. Among the early incidents were the trial of Luther Shaffer, who was convicted in 1888 for the murder of Isaiah and Nora Culby and became the only person who was ever hanged for a crime in Clinton County. And the flood of June 1, 1889, when hundreds of people took refuge in this lofty building as water overwhelmed their homes and businesses. This building stands as a tangible symbol of the abstract concept written on the wall behind me. We need such a symbol. Even if we do not need this physical building to show us that there is injustice, inequality, and evil in this world, we do need this courthouse to show us that there is also justice, equality, and goodness and that, if we work together to further these ideals we can slay the dragons of our age and make our ideals a reality for those who come after us… and that is truly a reason to celebrate,” Houser finished.

The commissioners then conducted their “regular business,” according to Smeltz, approving an Emergency Solutions Grant contract with the Pa. Department of Community and Economic Development for the amount of $99,639, effective from Nov. 30 through May 30, 2020.

– Payment of $42,222 to PCOMP for the second installment of a PCOMP Premium.

– Payment of $30,473 to Woods Services for residential treatment.

“I wish it was as cheap as it was in 1869, back then county government was much less expensive,” Smeltz said with a smile.