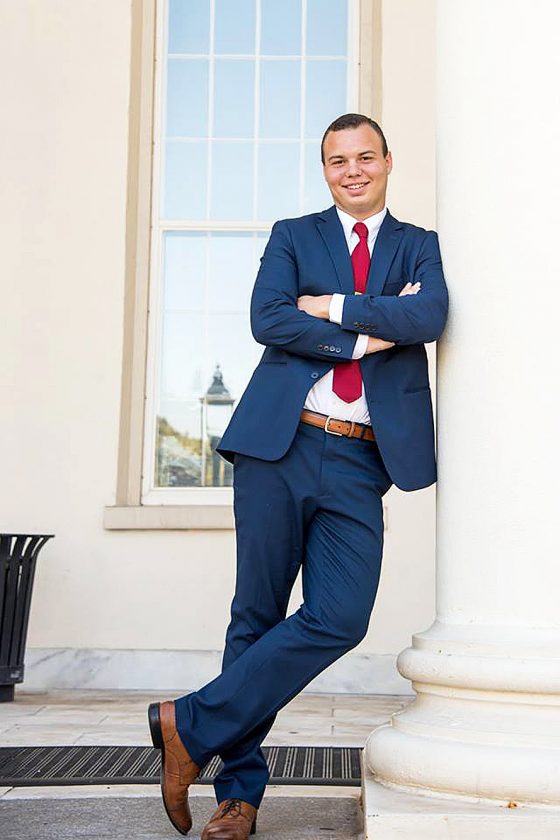 The Bellefonte Area High School student maintains a high GPA, is preparing for graduation, just had his Senior Ball and competes in track and field for the Red Raiders.

And, oh yeah, he’s also a candidate for Bellefonte school board.

You read that right – school board.

Kroell is one of seven candidates running for school board. At 17, he will be the youngest name on the ballot when the primary election rolls around on Tuesday, May 21.

“Local politics has always interested me,” Kroell said as he relaxed inside the lobby at BAHS following a recent track practice. “Government itself, I find it so interesting how it does so much. School board, education is so important. I’ve been in the Bellefonte school system for 13 years. I see how it works.”

In addition to his 13 years in the district, Kroell is the president of student council – he has been for all four years – and has attended countless school board meetings. Typically, you can find Kroell perched in the front row taking notes at the school board meetings, which are held on the first and third Tuesdays of every month.

“There are things that I see and I think ‘oh, this could be better.’ I don’t think other people know that. I just want to bring that other perspective. I want to make sure we’re getting all views and helping our students and educators to the best of our ability.”

Kroell said that he’s gotten a positive response – not only from his fellow students, but from the Bellefonte community.

“We’re all on the same page. I don’t think there’s much competition between us. We’re just pushing for the best for the students. Even the current board members are very supportive,” he said.

Five of the nine positions on the board are up for election. Kroell will be on the primary ballot with fellow newcomers Mark William Badger, Donna Smith, Julie Fitzgerald as well as current board members Kimberly Hearn, Rob Pacella and Robert Lumley-Sapanski. Like the other candidates, Kroell has cross-filed as Democrat and Republican.

If he is eventually elected to school board, Kroell said that he has a laundry list of items he’d like to see change.

“Communication is a big issue. We need to improve communication between the students, administrators and the upper-level administration. Make sure everyone is on the same page. Oftentimes, we look disconnected. It’s confusing for the students,” he said.

He would also like to see the district do a better job at eliminating bullying inside – and outside – the schools.

“When it comes to bullying and harassment, we need to keep taking steps forward. There’s always a few (cases) that slip through the cracks. I think we need to continue making progress with it,” Kroell said.

Balancing everything – classwork, track and field, social activities and running a campaign for school board – might seem daunting to some. However, Kroell simply takes it all in. Instead of getting overwhelmed, he views it as a challenge.

“I think I’m really good at time management. I don’t know how I do it, I just do it. I know how to plan things and try to solve as many things at once as I can,” he said.

Being class president has helped prepare him for a role on school board, he said.

“It’s been a fun ride, obviously. With Senior Ball and things this year, there was a little stress to it. But at the end of the day, it’s satisfying. You work hard and do some good things,” Kroell said.

Kroell is the son of Josh and Angie Kroell. He said that his parents have encouraged him every step of the way.

“They’ve been very supportive of me. My Dad helped me get the yard signs. He put half (of the money) up with me. I don’t think they were surprised when I said I wanted to run and they’ve been helpful. When I had a track meet on a Saturday, they went out and distributed yard signs for me. They’ve been there whenever I needed them,” Kroell said.

He will attend Penn State in the fall and will majoring in political science. Eventually, he said, he would like to attend law school.

As for his summer plans? Well, it all depends.

“Should I win the primary, it will probably be a lot of campaigning,” Kroell said. “I have a summer job working outside all day. But I’ll probably take some time off. Maybe a day or two.”