MILL HALL — Over 200 students, faculty, and staff at Central Mountain Middle School stayed after school on May 3, pledging to dance and not sit down for six hours to raise money for the Four Diamonds Foundation, which raises money to fight childhood cancer.

The theme for this year’s Mini-THON was “Under the Sea: Wipe Out Cancer.”

The gym was decorated as if you were under sea level. The doors had paper waterfalls to walk through and enter the underwater gym that was filled with fish, bubbles floating to the ceiling, seaweed, mermaids, clams, oysters, and a huge anchor hanging from the middle of the gym.

Disc jockey Kyle Turchetta provided the music this year and everyone in attendance learned the line dance and joined in every hour when it was played. This year, cornhole and yard sized Jenga was provided to help fill the hours. Many students paid to have their friends and faculty thrown into the shark tank where they had to stand until their time was up.

The speakers this year were Tiffaney Jarrett, the Fowler family, and Vhito DeCapria and his family. A special guest appearance was made by the Hulk, Vhito’s hero. KCSD superintendent Jacqueline Martin also spoke with the student body about her own experience with cancer and the effect it had on her and her family. She then presented a donation to the event.

PHOTO PROVIDED Students who donated their hair for children with cancer pose for a picture.

A total of 11 students had their hair cut on stage by friends, family, or hair stylists, with over 100 inches of hair donated. A huge “thank you” to Stacy Kelly and Kim Bechdel for donating their time to cut hair.

The final guest speaker this year was Alex Bartlett, a graduate of Central Mountain High School, and a survivor of testicular cancer.

“The fourth CMMS Mini-THON was a huge success. We couldn’t have done it without the mini-THON committee, both students and adults, the CMMS/KCSD community, and the support of the local businesses from Clinton, Centre and Lycoming counties. It is truly great to see our community come together and raise money for such a great cause,” said Jaime Kessinger, one of the committee advisors.

“Most of us, in one way or another, have been affected by childhood cancer. Whether it’s a classmate, one of our students, or a family member of a colleague, we have seen what a family needs to face that battle. We love that our small Mini-THON can make such a huge impact on the kids and their families that use the Four Diamonds Foundation.” said Elise Gordner, a committee advisor.

This year was an especially exciting year. Last year CMMS Mini-THON raised $28,359.81, and after a long year of hard work and fundraising the idea of beating the 2018 total just didn’t seem possible. 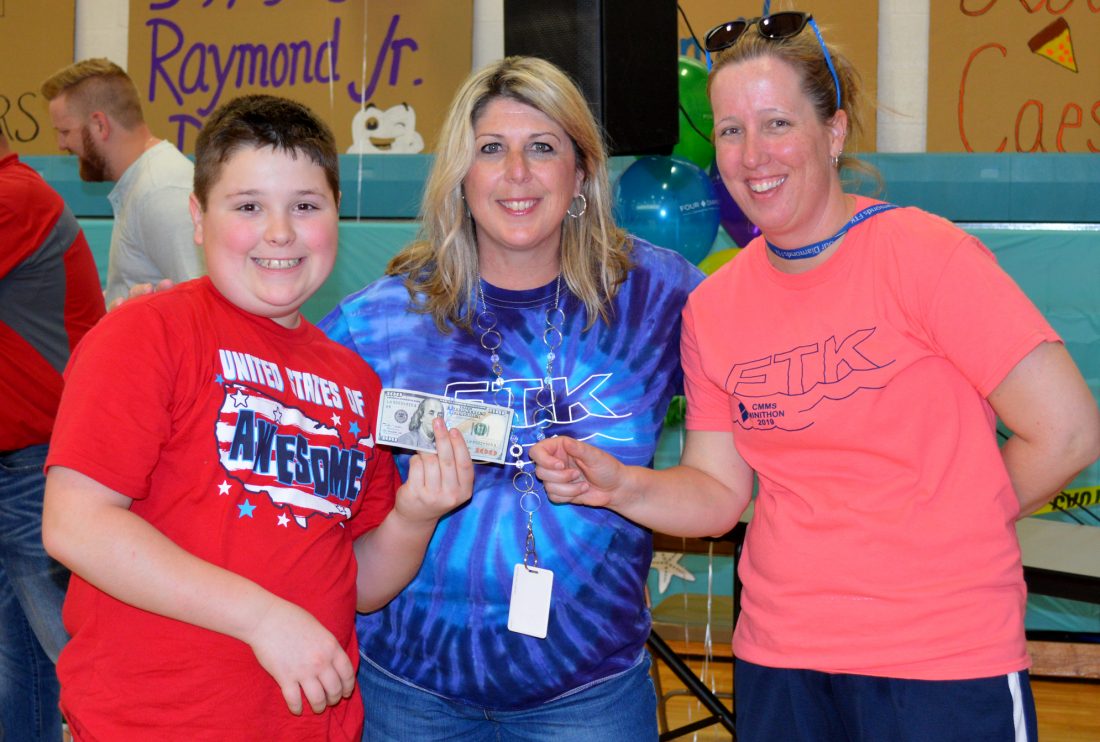 PHOTO PROVIDED Superintendent Jacqueline Martin hands her donation to a student and one of the Mini-THON advisors, Jaime Kessinger.

“Our district demographics can’t compete with other schools from across the state,” said Megan Heggenstaller, committee advisor, “so beating last year was a goal we set, but it was not going to hold us back if we didn’t reach it.”

As the end of the evening grew closer, the concessions shut down, the shark tank was closed and the money was collected for a final count. For the fourth year in a row, everyone entered the gym and was finally able to sit down as a few final words were given by CMMS Principal Justin Evey. He stated that it’s an honor to work in a building that pulls together for such a great cause and that everyone in attendance should be proud of themselves for making the pledge, no matter what the total reveals. One by one, from back to front, the numbers, decimal point, and comma were revealed to show the total raised was $37,466.52. Tears fell, applause broke out, and it all sunk in as the success of another year came to a close.

The Mini-THON committee would like to thank all the businesses that helped make the 2019 event such a success. A complete listing of those will be the article written by a CMMS student in the Junior Journal edition of the Lock Haven Express.