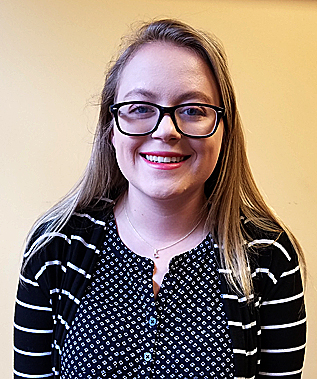 Eisenhart was appointed at a recent meeting following an extensive search for a manager to replace Kasey Campbell, who joined the City of Lock Haven as new director of community life.

Eisenhart has been a member of the Lock Haven community for the last four years as she completed her degree in recreation management at LHU.

She spent the last several summers as a day camp counselor and this past summer as the day camp director in her hometown of Sunbury. Eisenhart recently finished an internship with Centre Region Parks and Recreation in State College, where she was a part of planning and implementing programs throughout Centre County.

She also was a member of the Zeta Tau Alpha Sorority at LHU for four semesters.

In addition, Eisenhart has served as a volunteer the past four years in the Lock Haven community, working with the Salvation Army and other local organizations.

“I’m very excited to work with all of the businesses in the community, with members of Downtown Lock Haven Inc., the city, the county, the university and all of it supporters to benefit our community,” Eisenhart said.

While the new manager plans to visit local businesses, the public is encouraged to stop by and greet Samantha.

“We’re elated to have Samantha on board,” said Bob Rolley, DLH board president. “She learned to love Lock Haven as a student here and is taking that passion into our efforts to help local businesses, to recruit new businesses, to attract more private investment and to enhance community and economic development and quality of life here.”

The downtown manager and agency work closely with the Lock Haven University Small Business Development Center to help aspiring entrepreneurs and existing businesses. In fact, the SBDC staffs a business consultant in the downtown office on a part-time basis each week.

“This is such an important relationship as Downtown and the SBDC work more closely together in the coming months on some special projects,” Rolley said.

Meanwhile, Eisenhart’s immediate priority is selling sponsorships of Hometown Hero banners as the nonprofit agency gears up for another cycle of banners to display on streetlights along city streets and on the levee Riverwalk along the West Branch of the Susquehanna River.

The 2019 campaign will mean well over 2,000 banners will have been displayed in downtown since 2008.

The agency is soliciting sponsorships for new banners, reprints and rehangs through June 28.

Banners can be sponsored for active-duty military personnel, veterans and emergency-first responders.

The agency also is selling sports banners to be displayed on lightpoles on the levee near Lock Haven University.

Plus, Downtown Lock Haven Inc., with city approval, has invited LHU to display banners on streets leading to campus.

The agency is planning a banner unveiling ceremony on the floating stage at the Corman Amphitheatre on Saturday, Aug. 3.

Funds raised from the banner program are integral to helping to sustain the nonprofit agency, Rolley said.

Meanwhile, DLH organizes and runs the Best of Clinton County festival and parade, scheduled this year for Saturday, June 29.

The agency has already received a lot of applications from parade participants.

Other initiatives include partnering with the Clinton County Arts Council in support of the LHJams festival Aug. 16-17.