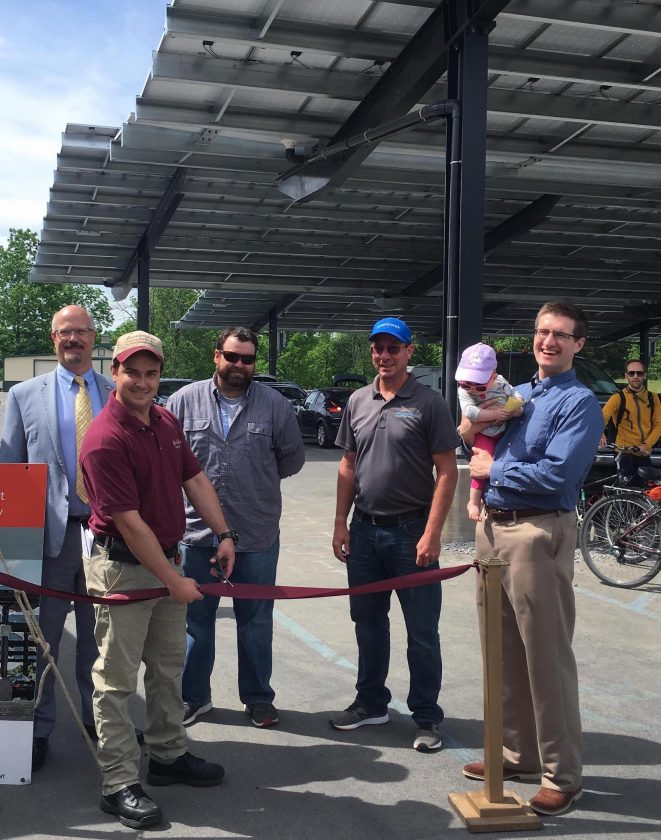 Centre County Commissioners Michael Pipe and Mark Higgins praised the move to solar. Commissioner Pipe said, “I’m so excited about the new carport. We lived in Millheim for four years before we moved to Boalsburg, so I’m a huge fan of Burkholder’s and so thrilled that they went solar.”

Centre County Commissioner Mark Higgins said, “This is a great idea. Utility-scale solar arrays make great financial sense for local businesses. We should have more of these in Centre County.”

Building PA’s largest privately owned solar carport is a major investment. “As a business owner you have to do things that make financial sense and solar certainly does. Energy is our second largest fixed expense. With solar power we can offset 65%-75% of our power usage,” said market owner Russ Burkholder. “A lot of the credit goes to Sun Directed, out of State College, who initially approached us and educated us on the cost savings of solar power,” said Burkholder.

Sun Directed’s Co-Founder, Heather Shadow said, “The SEP grant awarded for the project at Burkholder’s Market is designed to give back to Pennsylvania by generating funds for future solar projects. Solar Renewable Energy Credits (SRECs) are issued for each megawatt hour of solar power generated in the state. As part of the grant agreement, the SRECs belong to the state for the life of the project. Pennsylvania then sells those credits to provide funds for future grant projects. This type of project helps our local economy and businesses grow. Hiring a small business to install these projects keeps the money in our area.”

Not only will the SunPower Helix Carport power the market, but customers can also charge up their electric cars for free while they shop. Burkholder’s two solar-powered chargers are the only publicly available car chargers on the 55 mile stretch of Route 45 between Lewisburg and State College.

Area electric car drivers turned out for the event, taking turns charging up while chatting with Burkholder and Shadow about the carport’s design. Burkholder said, “We were able to save on costs by using SunPower’s high powered panels and design. The panels serve as the rooftop, eliminating the expense of an under-roof. The cantilevered design incorporates good snow and water management, so shoppers don’t have to worry about snow sliding off onto their cars.”

Michael Shadow, CEO of Sun Directed Solar Energy Systems who led the design and installation of the carport system, said, “The 1,242 solar panels on Burkholder’s carport will generate over 650 megawatts of energy annually. That’s enough energy to drive an electric car 2,400,000 miles, or almost 100 times around the earth at the equator. Even on an overcast day, the solar panels generate power. For businesses, going to solar power makes a lot of sense.”