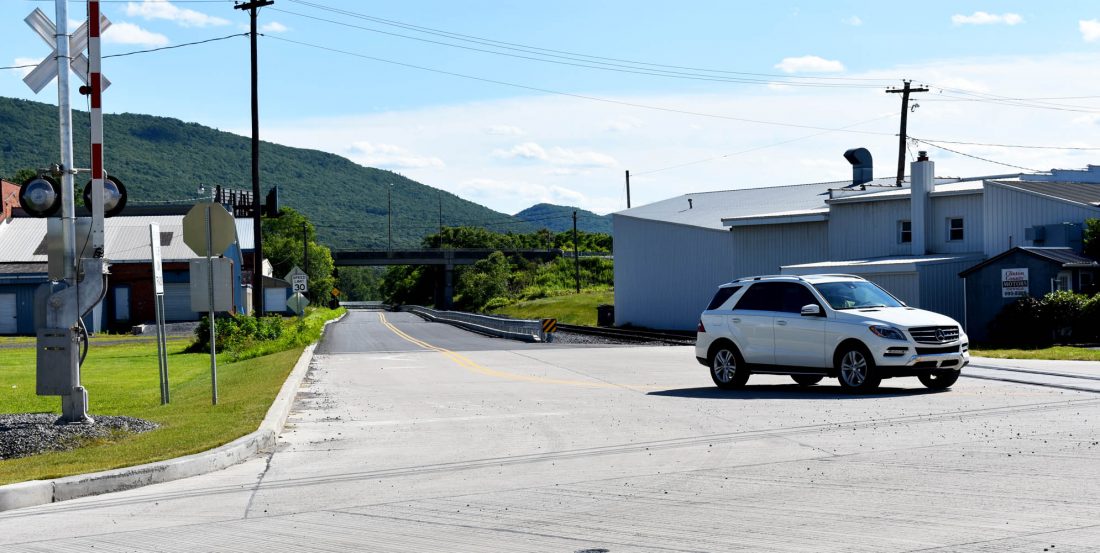 LOCK HAVEN — An access road to First Quality Tissue that has been in the works since 2016 should soon be open to truck traffic.

Jeff Stover, executive director at SEDA-COG Joint Rail Authority (JRA) who is overseeing the project, said he hopes to see the road completely accessible by October.

Starting in July last year, JRA closed a section of East Walnut Street while it moved short-line railroad tracks approximately eight to nine feet to assist in the construction of the road which will run along the east side of the tracks to First Quality’s manufacturing plants.

Currently, the new road is paved, lines are painted and it is being used by construction vehicles involved in the building of First Quality’s third paper tissue plant, Stover said.

A guardhouse and gate need to be built at the entrance of First Quality before the road can be regularly used for tractor-trailer trucks, he said.

Both the access road, tentatively named First Quality Way, and the Park Street entrance to the plants are being utilized while everything is completed, Stover said.

JRA must meet with the City of Lock Haven and Castanea Township to discuss agreements before the road can be officially opened as well, he said.

The road is 3,900 feet long, beginning at Walnut Street in Lock Haven and extending to the First Quality plant.

“Of that total length, the portion to be dedicated to the city is 1,400 feet … to Castanea Township is 400 feet (and) the balance 2,100 feet will be internal to First Quality Tissue,” Stover said.

The access road has been in the works for three years in an effort to address traffic congestion in Lock Haven from large trucks going to and from the plant.

Once the road is open, up to 200 tractor trailer trucks will theoretically use the road instead of city streets by taking the Walnut Street exit off Paul Mack Boulevard from Route 220, going east on Walnut to the new road.

Getting the trucks to use the new entrance will take time, officials said, because most of the drivers use digital GPS and the new road may not show up on the online maps right away.

The $4.7 million project is being paid for, in part, by a $3 million PennDOT Multi Model Transportation grant, as well as through the city’s liquid fuels fund totalling $131,933 and $1,257 from the general fund.

The commissioners also contributed $44,397 in liquid fuel funds annually for three years toward the work.

First Quality has pledged to fund 30 percent of the cost of the project.