No West Nile Virus in state — yet

County gets update on mosquito spraying

LOCK HAVEN — There have been no positive reports of West Nile Virus in Pennsylvania yet this year, according to Wayne Laubscher of the Centre County Planning Department.

That was the good news from Laubscher and Christian Moyer, of the Pennsylvania Department of Environmental Protection, at the Clinton County commissioners weekly work session Monday morning.

The Centre County Planning Department is coordinating the West Nile Program and helping with mosquito disease control in Clinton County. Laubscher said his group has been setting traps and responding to nuisance complaints at least every other week.

“We are trying to nip the thing in the bud early,” he said. “There have been no West Nile complaints and no reports of any infection with humans or animals.”

“The county thanks you and the DEP for what they are agreeing to do and what you have done for the county,” said commissioner Robert “Pete” Smeltz.

“There are many, many complaint calls and situations we had to respond to … mainly in the Avis and Jersey Shore area, but in Lock Haven and Castanea as well. It is due to the amount of standing water present, so we decided to expand the program. We are concerned with West Nile Virus, dry and hot is when it thrives. It is kind of odd to see no reports, but there is still time. We will just see what happens,” said Moyer.

“Last year was the worst in a while,” Moyer continued. “There were 130 cases, eight fatalities, but every year is different and the environmental conditions are different. There are some theories out there as to why, but there is not much we can do. We are counting our blessings right now.”

Commissioner Jeff Snyder urged the public to not let standing water in their tires or on their property.

Laubscher suggested using “donut dunks,” a substance that dissolves in water and kills mosquitoes. Produced by the company Summit, it is an effective way to kill mosquitoes without harming anything else, he said.

And there is also a foliage spray available that can be metered out of a garden hose,” Laubscher continued.

“Pools that aren’t being used … if we don’t have permission to go onto the property to treat the mosquitoes, then it becomes a code enforcement issue. One bird bath we saw had about 50 mosquito larva. Any standing water can become an issue in just a matter of a couple days,” Laubscher said.

“Not as much as people think,” responded Laubscher. “They do help, but not much. Birds, amphibians and fish also eat them.”

“It takes special circumstances to do an aerial spray, like a thousand complaints in one day, an emergency situation. Usually it is handled by truck,” Moyer added. 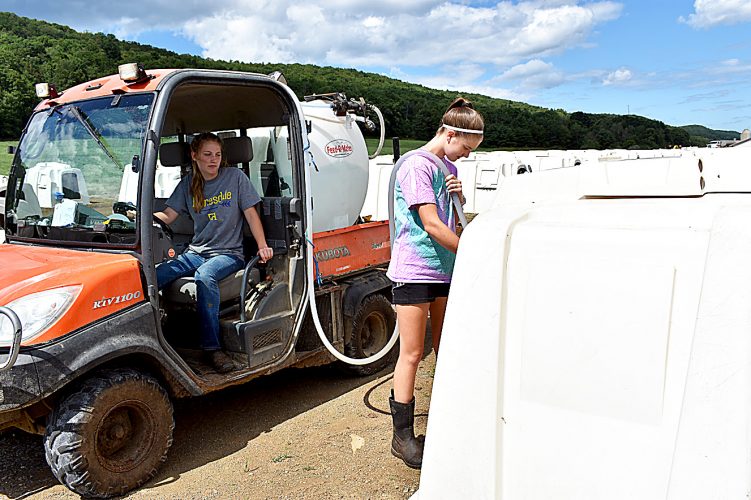 A Revolutionary soldier gets a new resting place