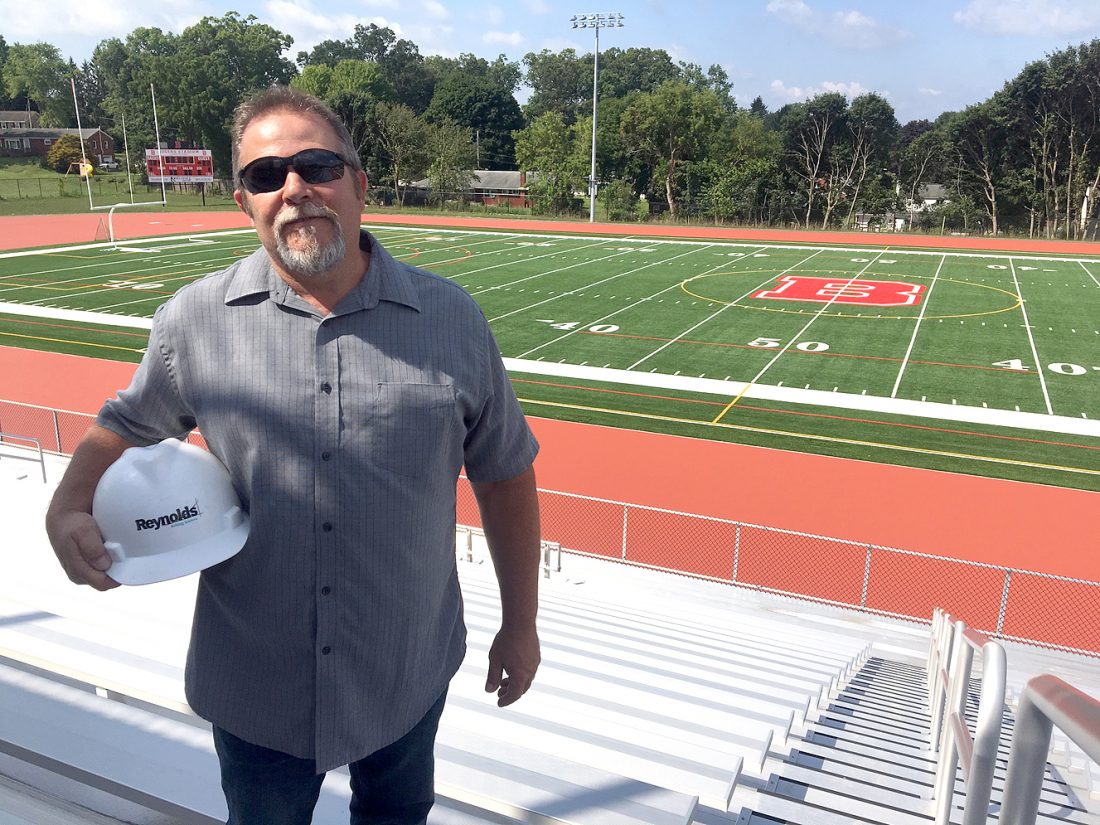 CHRIS MORELLI/THE EXPRESS Project manager Dave Stezin stands in the bleachers of Rogers Stadium during the final days of construction. The $7 million project is nearing completion.

BELLEFONTE — On Thursday, a small group of school board members, administrators and coaches toured Bellefonte Area High School’s new crown jewel. As a group of construction workers feverishly worked on the fieldhouses, restrooms and poured cement, the group checked out the turf, track and fencing.

Project manager Dave Stezin walked around, hard hat in hand. He couldn’t help but smile as he looked around the stadium. Sure, it’s still Rogers Stadium. But those walking in for the first time will hardly recognize it. The finishing touches will be icing on the cake for Stezin and his crew.

“There was a lot of work to do in a short amount of time,” Stezin said. “With the season that we’re in right now, everyone is extremely busy. Manpower is always an issue. That threw a curve in there.”

As far as the finishing touches are concerned, Stezin has a to-do list.

“By the end of the week, we want to have most of the concrete concourse done, fencing is going up, doors will start going on buildings roofing is finishing up. By the end of next week, we’re gonna be in a good place to start turning things over to the owner,” Stezin said.

Last season, Rogers Stadium construction forced the Red Raider football team to spend most of its season on the road before hosting Bald Eagle Area in its season finale.

On Monday, Tuesday and Wednesday, the stadium will open its doors for a “Light Up the Field” event. Each night, the doors will be open from 5:30 to 7:30 p.m. During that time, the public is invited to come in and check out the new home for Bellefonte football, boys’ and girls’ soccer, boys’ and girls’ lacrosse and track and field.

“That’s the big push right now. To get the concrete stairs in so they have complete access to the area so nothing is impeding them from using it,” Stezin said.

Bellefonte Area School District superintendent Dr. Michelle Saylor was one of those on the tour Thursday. She said that she was impressed with everything that she saw.

“I’m excited and I can’t wait to share this with our community. They’ve waited for it a very long time and I think it’s going to provide a lot of opportunities to our students and our residents,” Saylor said. “It’s been a long process and people have been very, very patient. We thank them for that. I think it was well worth it. There’s a lot of a joy, a lot of excitement and a lot of relief.”

Several members of the Bellefonte school board were on hand for the tour as well. Board vice-president Bob Lumley-Sapanski marveled at everything the new Rogers Stadium has to offer.

“When I ran for the school board 19 years ago, the stadium was at the top of my list to get done,” he said. “It’s beautiful. I’m really impressed and I hope the community comes out to support it. It’s been so many years in the making. This is definitely a celebration.”

Everything is new — restrooms, field houses, concession stand, ticket booth and press box. For those who haven’t been to a football game since 2017, the stadium is almost unrecognizable.

That’s not an accident.

When the Rogers Stadium project was conceived, the school board wanted something special. A first-class facility that would be capable of hosting multiple sporting events. The $7 million project began in spring of 2018.

The stadium project was funded by a $3 million grant, $3 million from the district and $1 million through capital campaign fundraising. The first phase of the project saw the installation of new bleachers, turf and paving for an eight-lane track. The second and final phase addressed all of the stadium’s support structures.

Starting on Friday, Aug. 23, the stadium will officially open for business as Bellefonte hosts Jersey Shore in week one of the high school football season. The first soccer game will be played on Aug. 31 as the girls’ soccer team hosts the annual Raider Classic.

“I think overall, everyone is going to be happy. It came in under budget from where our estimate was. I think they can take a lot of pride in what they’re going to end up with,” Stezin said. “It’s going to be a beautiful facility, it’s going to give them many years of carefree maintenance and it’s going to be a great venue for everything.”