At 9/11 memorial, new recognition for a longer-term toll 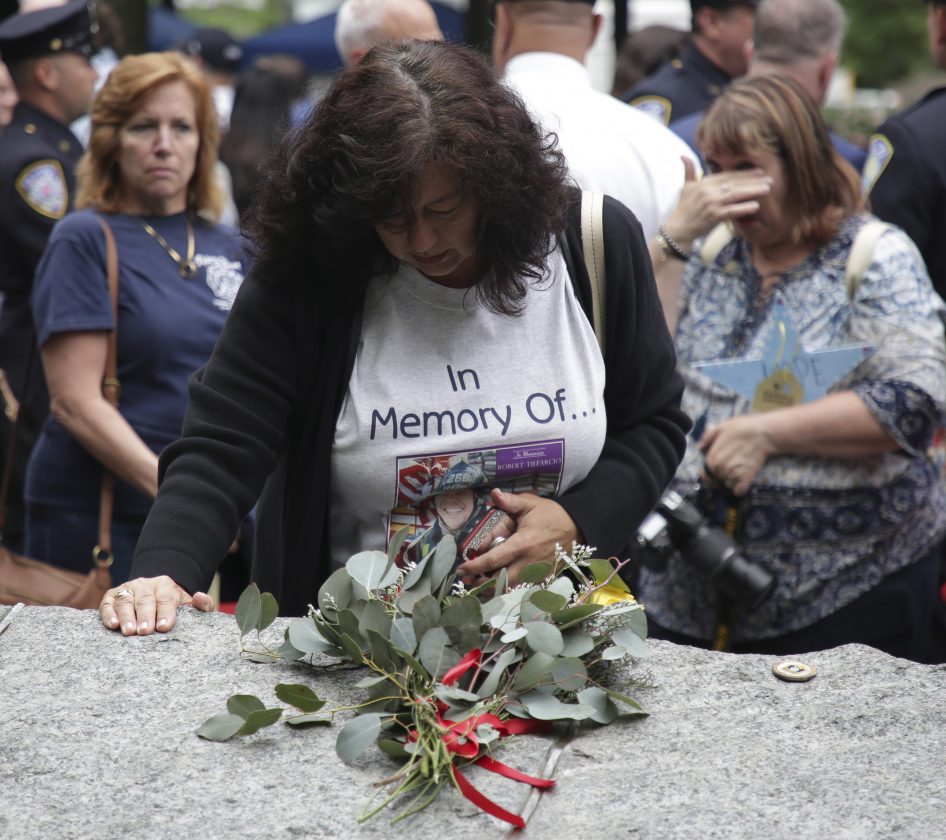 AP Photo/Seth Wenig Tina Tilearcio pauses at a stone that is part of the new 9/11 Memorial Glade on the grounds of the National September 11 Memorial & Museum, after its dedication ceremony in New York. Her husband, Robert Tilearcio, died in 2017 of illness related to his recovery work at ground zero.

NEW YORK — When the names of nearly 3,000 Sept. 11 victims are read aloud Wednesday at the World Trade Center, a half-dozen stacks of stone will quietly salute an untold number of people who aren’t on the list.

The granite slabs were installed on the memorial plaza this spring. They recognize an initially unseen toll of the 2001 terrorist attacks: firefighters, police and others who died or fell ill after exposure to toxins unleashed in the wreckage.

The unusual addition reflects a memorial that is evolving as the aftermath of 9/11 does. And for families like Joanna Reisman’s, the new 9/11 Memorial Glade gives their loved ones a place in the landscape of remembrance at ground zero. 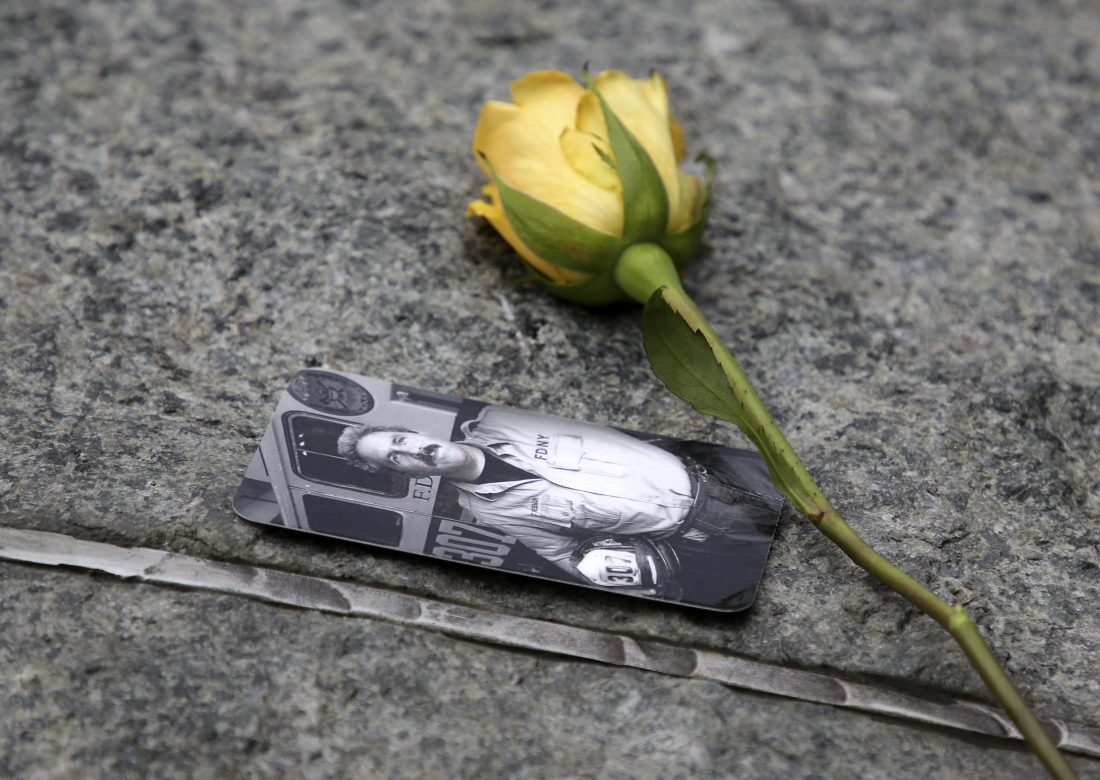 A firefighter’s widow, she emphasizes that the losses thousands of families suffered on Sept. 11 were horrific.

“We just have to recognize that there were others, too,” says Reisman, whose 54-year-old husband, Lt. Steven Reisman, searched through the World Trade Center debris for remains, and then died in 2014 of brain cancer. He was 54.

Subtle and sculptural, the memorial glade features six stone pieces inlaid with steel salvaged trade center steel. They jut from the ground along a tree-lined pathway.

Unlike the plaza’s massive waterfall pools memorializing people killed on 9/11 — those whose names are read at anniversary ceremonies — the boulders are not inscribed with the names of those they honor. There is no finite list of them, at least not yet.

Instead, nearby signs dedicate the glade “to those whose actions in our time of need led to their injury, sickness, and death,” including first responders, recovery workers, survivors and community members at the attack sites at the trade center, at the Pentagon and near Shanksville, Pennsylvania. 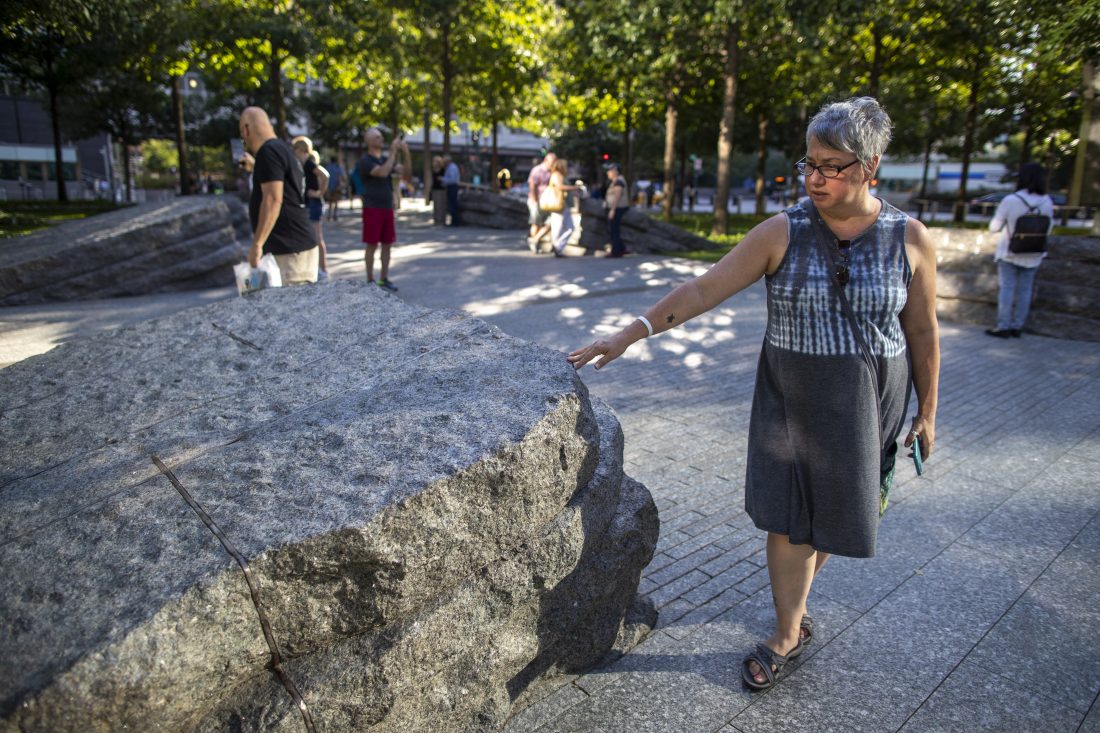 AP Photo/Mary Altaffer A visitor touches one of the granite slabs at the 9/11 Memorial Glade at the National September 11 Memorial & Museum in New York.

The collapse of the trade center’s twin towers produced thick dust clouds, and fires burned for months in the rubble.

Many rescue and recovery workers later developed respiratory and digestive system ailments potentially linked to inhaled and swallowed dust. Some were diagnosed with other illnesses, including cancer.

Research continues into whether those illnesses are tied to 9/11 toxins. A 2018 study did not find higher-than-normal death rates overall among people exposed to the dust and smoke, but researchers have noted more deaths than expected from brain cancer, non-Hodgkin’s lymphoma and certain other diseases; an unusual number of suicides among rescue and recovery workers. Studies also have suggested that highly exposed workers may face more problems, including somewhat higher death rates and a modestly higher risk of heart trouble, than less-exposed colleagues.

Over 51,000 people have applied to a victims compensation fund that makes payments to people with illnesses potentially related to 9/11; it has awarded over $5.5 billion so far. After impassioned advocacy, lawmakers this summer ensured it won’t run out of money .

None of that was foreseen when the memorial design was chosen in January 2004. But the selection jury “knew that we’d be picking something that allowed for an evolution of the site,” says member James E. Young, a retired University of Massachusetts Amherst professor.

As attention grew to the deaths of ailing 9/11 rescue, recovery and cleanup workers, some memorials elsewhere began adding their names . A remembrance wall focused on them was dedicated in 2011 in Nesconset, on Long Island.

But the trade center memorial has a “responsibility — especially where it’s located, on sacred ground — to continue to tell the story,” says John Feal, who lost part of a foot while working as a demolition supervisor there and later founded a charity that maintains the Nesconset memorial.

Ground zero memorial leaders had misgivings at first, memorial CEO Alice Greenwald says. They noted that the health problems were documented in the below-ground Sept. 11 museum, though it gets far fewer visitors than the memorial plaza. And the leaders felt protective of the memory of people killed on 9/11.

Responders and health advocates “could see what we couldn’t see right away … that this was really something that needed to be commemorated, as much as documented,” Greenwald said.

Plans for the $5 million glade, designed by memorial plaza architects Michael Arad and Peter Walker, were ultimately announced in 2017.

The traditional image of a memorial is an immutable tribute, literally written in stone — if also potentially susceptible to shifting views of its subject, as demonstrated by ongoing debate over Confederate statues around the American South.

But sometimes monuments adapt to take on more meanings.

Some memorials built after one war get expanded or rededicated to include veterans of other wars. A memorial to victims of the 1993 World Trade Center bombing was destroyed on 9/11, and their names were included in the current memorial.

After the Vietnam Veterans Memorial was built in Washington, additions nearby recognized nurses and other women who served, and veterans who died years later from lasting effects of the defoliant Agent Orange, post-traumatic stress disorder or other injuries that initially weren’t recognized.

Such memorials speak to a change over time in how, and whom, monuments commemorate, said Kirk Savage, a University of Pittsburgh art and architecture history professor and memorials expert.

Rather than a 19th-century leader on a pedestal, newer memorials often acknowledge everyday people’s involvement in historic events and shift focus “from recognizing people that we emulate to people that we grieve for,” he said.

Caryn Pfeifer has had many people to grieve for over the past 18 years.

First there were the colleagues and friends whom her husband, firefighter Ray Pfeifer, lost on 9/11 and whose remains he sought in the debris. Then there were those who got sick and died over the years, as he fought for health care for first responders while battling his own kidney cancer.

With the new memorial glade, she says, “now we have a place to go and sit, think about everybody, and just pray for the next poor guy.”