Lunch with the Super 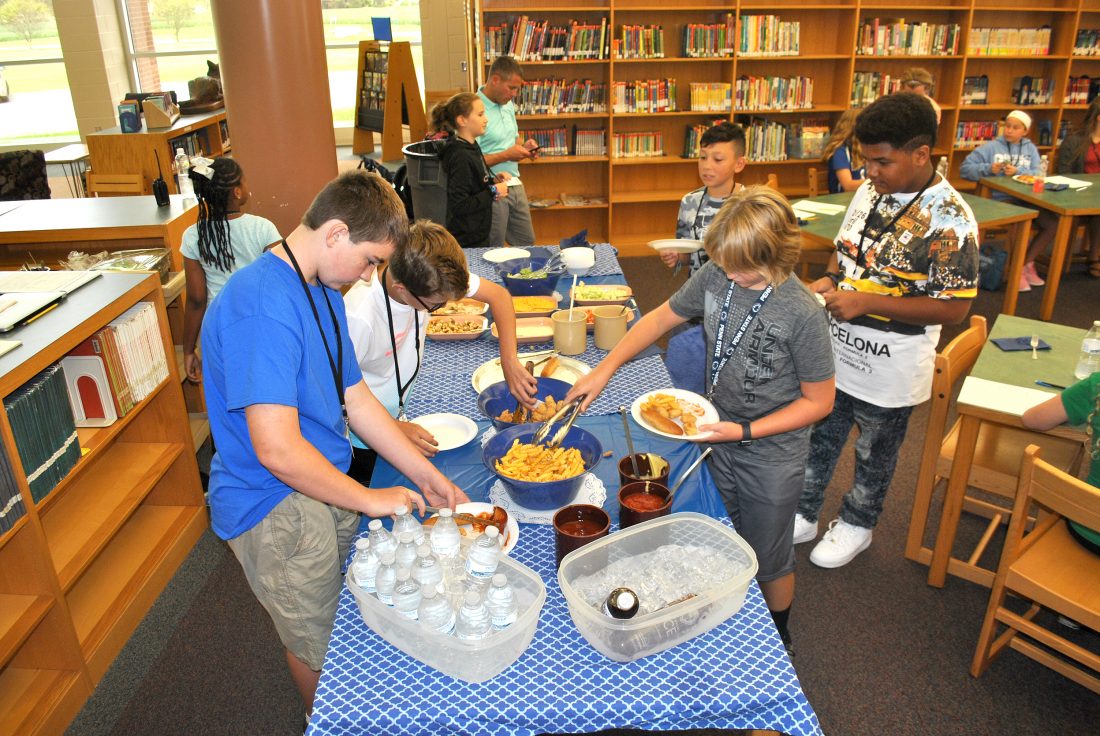 MILL HALL — Students sat at tables in the library of Central Mountain Middle School and munched on chicken nuggets, French fries and salad. But this was no ordinary lunch.

The lunch was organized by Keystone Central School District superintendent Jacquelyn Martin. She’s spent the past several days making her way to schools throughout the district to hear what students have to say. At Thursday’s lunch at CMMS, she heard from students in grades sixth through eighth on a myriad of topics.

Central Mountain Middle School principal Dave Peters sat and listened as the students cleared the air. He asked some questions as well and tried to provide some answers, when necessary.

All in all, he said that he believes that students having lunch with the superintendent is a wonderful idea.

“I think it’s a great opportunity for our kids. Jacque did the same thing with our students last year. She’s letting the kids have a voice in our school district. I appreciate her giving us this opportunity and I think the kids really value it … to have someone ask their opinions and input. I think it’s a positive every way you look at it,” Peters said. 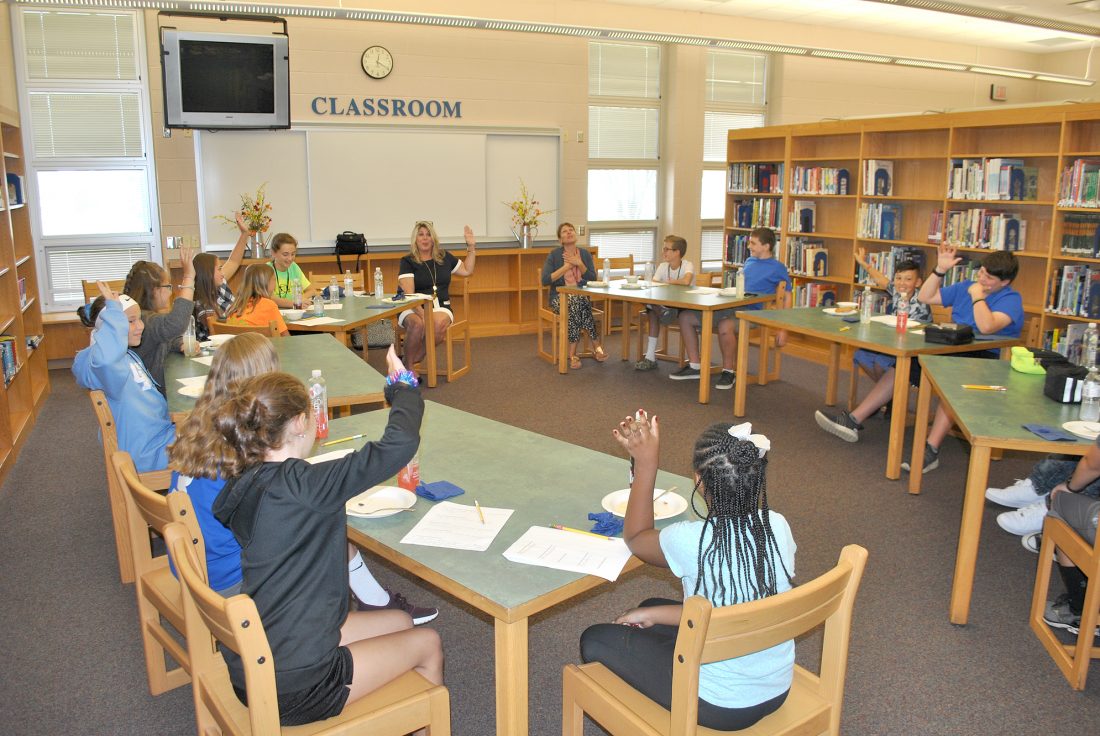 Peters didn’t sit in on last year’s session, but he did on Thursday. He told the students to be “open and honest” when providing their answers.

“Don’t worry about us being in the room,” Peters said.

“This is an open discussion,” Martin told the students. “You don’t have to raise your hand. We’re going to have a very adult-like conversation.”

The students began the conversation talking about their school’s strengths. Among the highlights: Students said they liked the school library’s book selection, classrooms are clean, teachers are “nice,” there are plenty of social events and lots of supplies. 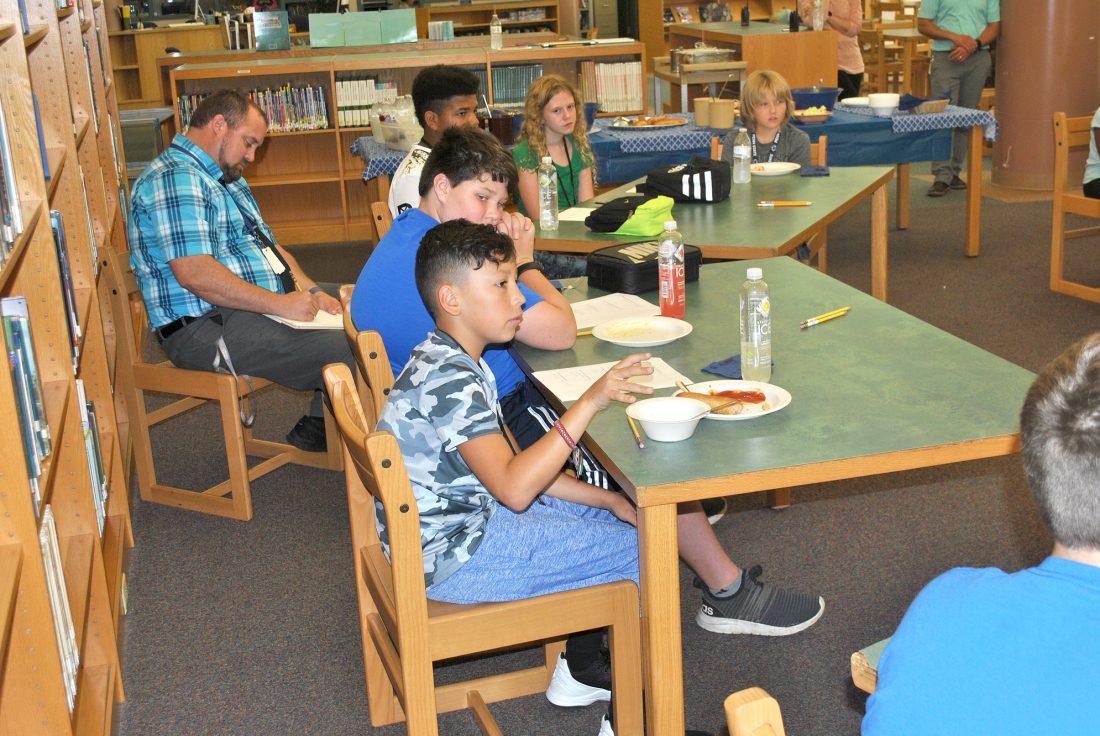 But it wasn’t all positive. Students didn’t hold back and voiced their opinions on things they didn’t like such as lack of musical instruments, school bus security and students who curse.

The students also talked about not having enough time between classes to get from one room to another. It was unanimous that a couple of minutes is not enough time. Students said that because of the time crunch, there is a lot of running in the hallways.

Martin said she would look at the schedule and adjust it, if necessary.

“Mr. Peters and I knew it was going to be pretty tight when we made the schedule,” she explained, “but we were trying to maximize the number of minutes you had for instruction. But if we need to adjust to make it safer, we can do that.”

One of the big topics was bullying. Martin asked the students what they do when they see bullying taking place.

“When those things are happening and you see kids doing something that is really wrong, do you step in or do you feel like you better stay out of it and not say anything,” she asked.

Eighth grade student Devon Charles said that it “depends on the situation.”

Martin explained that bullying occurs in every school, in every district.

“It’s been around for decades,” she said. “How schools, kids and adults react to the bullying determines if it continues or how bad it gets. What I’m noticing in the schools is that kids tell me it happens a lot, but the actual reported incidents are very low.”

According to Martin, students can help by simply stepping in and helping the person being bullied.

“Removing (the person) from the situation is protecting them. We need to do a better job — starting in elementary school — of teaching each other how to protect each other,” Martin said. “We need to get into a situation where kids feel they can go to adults. You are 11, 12, 13 years old. It’s not your job to solve adult issues. That’s why there are adults around you.”

Toward the end of the conversation, students asked if they were allowed to get seconds. When Martin gave them the go-ahead, they lined up for more chicken nuggets, fries and salad.

At a table in the corner, Cora Myers, Ivy Toner and Paige Lachat sat and chatted while they enjoyed the remainder of the lunch hour.

“I really liked having the conversation,” Toner said. “I like that they want to keep track of what’s going on at our schools. They can find out what needs fixing and what we do very well.”