Renovo to appoint board of appeals to investigate rowhouse safety issue 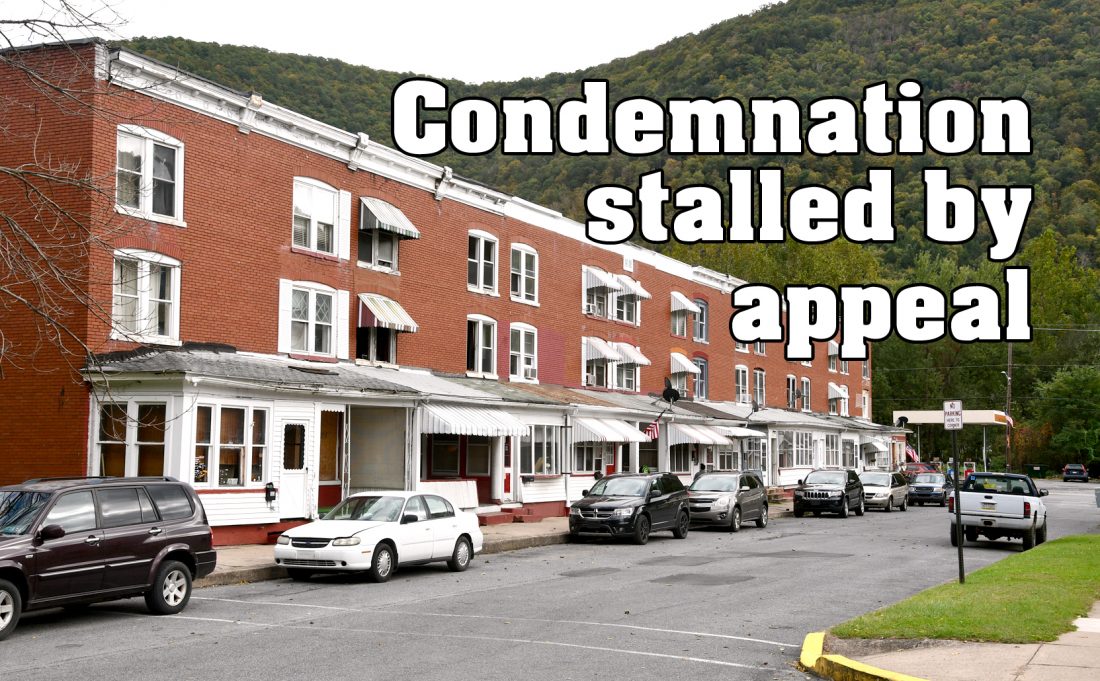 KEVIN RAUCH / THE EXPRESS Residents of this rowhouse on 14th Street in Renovo have been granted a stay against the condemnation proceedings.

LOCK HAVEN — It looks like residents of the 14th Street rowhouses in Renovo have gotten a reprieve.

Clinton County Judge Michael Salisbury on Thursday remanded the appeal filed by residents of the 16-unit property back to the Renovo Borough Board of Appeals.

The action puts a hold on the Sept. 16 condemnation notice handed down by Victor Marquardt, borough property maintenance manager, that the residents must vacate the properties within 20 days because they are unsafe and uninhabitable.

The judge cited the International Property Maintenance Code and said the appeal notice was in conflict with that code relative to a board of appeals, since the borough has no such board.

A board of appeals consists of not less than three members who are qualified by experience and training to pass on matters pertaining to property maintenance and who are not employees of the jurisdiction, according to International Property code.

And Renovo plans to get one as soon as possible.

Renovo Borough Solicitor Stuart Hall said Friday that the borough will appoint a board of appeals.

“We need to find people willing to sit on the board… people with some experience in this area. That’s our plan,” Hall said.

Once the board of appeals is in place, Hall said the board will inspect the building and see if they agree with Marguardt that the building is a safety hazard and people should not be living in it. Then there will be a public hearing with a stenographer recording it. Members of the board of appeals will be offering testimony as to their findings and whether or not they agree with Marquardt that the property is unsafe, Hall explained.

If they agree, the condemnation will move forward again.

Of course, the residents could again appeal that decision, Hall said.

At that point, the judge would likely look at the testimony and evidence from the hearing along with the decision of the board of appeals and decide whether it is legally correct, Hall continued. If the residents hire a structural engineer who says the building is sound, that would also be part of the information considered by the judge.

“The statute requires that it be held that way,” the solicitor said, adding that most small boroughs do not have a board of appeals until something like this arises.

It’s really no surprise that the residents chose to appeal the condemnation notices. When they got the news in mid-September they promised they would go to court to stop from being forced out. They filed an appeal within the 20-days given to them in the Clinton County Court of Common Pleas on Oct. 1 through attorney Rocco Rosamilia.

The decision to condemn the rowhouses came after years of neglect and produced a myriad of issues, including unsafe and caving-in roofs.

Six of the houses are currently in a repository sale state with two of those having fire damage, and a total of five properties have fire damage at this time.

Tax Collector Deb Pedokus reported that of the 16 properties, nine are taxed, seven are untaxed and numerous are late on taxes, water and sewage.

Marquardt said that the stricter FEMA flood plain requirements that went into effect in June of 2016 also impacted his decision, along with a recent fire that left two families displaced in the row of houses.

The 2016 decision requires that any repairs worth half of the value of the property or higher in a designated special flood area must make drastic upgrades, Marquardt said.

For example, if a vacant house is bought in a repository sale for $500 and a repair of $250 or more is made, that house would have to be elevated 13 feet and/or the mechanicals moved to the second floor… which of course in a row house would be all but impossible, he said.

Marquardt said the most obvious route in fighting the decision would be to find a structural engineer willing to say that one particular property owner’s house could be saved, even if the neighboring and connected house(s) are falling down.

“It’s the method of the construction,” Marquardt said. “You can’t tear one down without effecting others. It will be a tough battle to find a structural engineer to say that some houses can stay while multiple others are removed.”