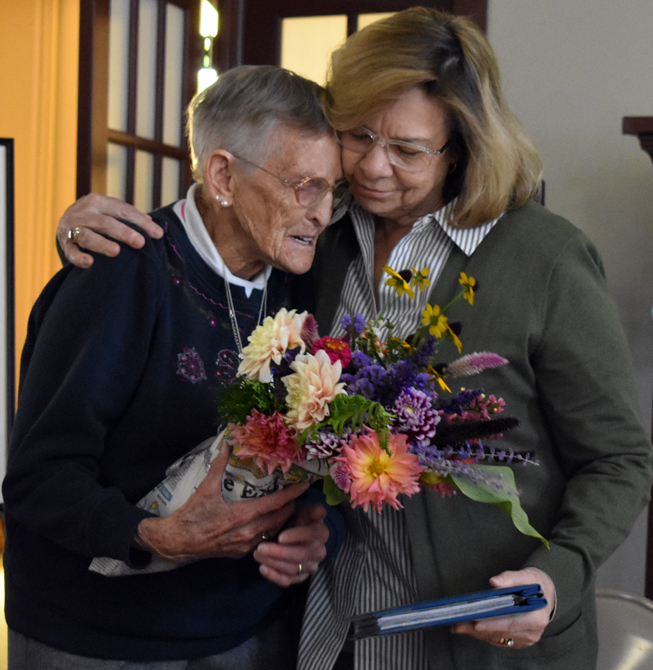 LAURA JAMESON/THE EXPRESS Lana embraces Covenant Cafe member Eleanor Kodish after receiving a scrap book of her accomplishments and flowers. A thank you from the group for her dedication to the community.

LOCK HAVEN — Lock Haven Express Managing Editor Lana Muthler expected to give a presentation about the history of the local newspaper on Oct. 15 during Covenant Cafe’s monthly meeting.

What she didn’t expect was for those gathered to give her a presentation in return.

During her presentation, Muthler talked about the many changes the community and The Express have seen over the years since the newpaper’s inception in 1882:

“Oh, so many changes in the community and the county and The Express, which has continued to perform its daily task of recounting each day’s chapter in the accumulating story of life in Clinton County.

“To some extent, this newspaper has contributed to the changes and progress which has transpired, sometimes by merely keeping citizens informed of their needs and the opportunities available to their initiative and sometimes by active editorial leadership.

LAURA JAMESON/THE EXPRESS Lana passes out old copies of The Express that featured family recipes during her presentation. Many members of the group reminisced over the recipes, having remembered when they were first featured in the paper.

“It’s done that for 132 years and as I see it… it just keeps changing and getting better, remaining the best little community newspaper in the world.

“I’m so proud to put my name in it every day as we continue to tell the wonderful stories about all of you, our readers, and give you the kind of news you want and need. We like to say we write a book every day, and we’re so glad you enjoy reading it,” she said.

A round of applause erupted and then the tables were turned as members of the group took over.

Shock was evident on Muthler’s face when the group produced a bouquet of flowers and a scrap book, honoring her years of service at The Express.

Members of the group also shared kind words about the editor, highlighting her integrity and community oriented journalism.

Jacki first met Muthler at her children’s clothing shop, Heaven to Seven on Main Street, where she noted her engaging personality, awareness of her environment and positive community outlook.

“I began to read everything Lana wrote and felt The Express was very fortunate to employ a reporter who, when covering a story, actually spoke to those involved, got all angles of the story and got it right,” Jacki continued.

Eleanor Kodish joked she’d have to lean against her chair to ensure she stayed upright during her speech.

“I’ve watched Lana over the years go from a young reporter that wrote the most amazing articles about the people and happenings of our town and surrounding areas,” Eleanor said.

One of her favorite things about Lana’s stories are that it feels as if she’s talking to you, she said.

“I’ve always enjoyed her style of writing. She writes as she talks,” she said. “In each article of any personal nature, she writes as if she’s speaking directly to her readers.”

Those human interests stories often bring “a tear to my eye and a lump in my throat,” she continued.

In the decades that Eleanor has known Lana, she has been the subject of many of her articles. Two of which she spoke about.

She produced pages of The Express’s Golden Opportunities section from years gone by that featured a column she wrote, along with an article of Lana’s.

“Ironically, this is the one in which I had written an essay about my experiences as caretaker for my husband, Ray, who had been diagnosed with Alzheimer’s,” she said. “Lana wrote a beautiful article accompanying my essay in which she wrote about our marriage of 60 years.”

She also spoke about her interactions with Lana after a horrific accident that saw the loss of her son’s wife in the summer of 2018.

“When our son, Rich, was involved in a violent car crash, in which his wife Nancy lost her life, Lana came to our house to offer love and solace and understanding,” Eleanor said, tearing up as she spoke. “She sat and she talked quietly and she listened and when she left I had a feeling of quiet peace.”

“I was honored too that she would take the time from her busy schedule to come to our house and let us know that she truly cared,” she continued.

Eleanor thanked Lana for attending Covenant Cafe’s meeting to share her stories of The Express and for her decades of service to the area.

“If and when you retire from The Express, you will be truly missed by a multitude of people and The Express will miss some of its spiciness,” Eleanor said.

Kitty Oechler thanked Lana for always ensuring that The Express publishes articles and information about Covenant Cafe and helping make the organization as successful as it has been.

“I’ve been and will always be appreciative of your graciousness as a news woman,” she said.

Lana thanked the group for their kind words and gifts, still a little overwhelmed by the surprise gesture.

“I’ve gotten to know many of you over the years from my work and I’ve enjoyed working with all of you,” Lana said. “I like telling stories, what can I say? And as long as people like you are willing to tell your stories we’ll continue to put them in the newspaper.”

Lana’s words were met with a round of applause. The flowers, the book and the gratitude were a wonderful gesture to thank a woman who has dedicated herself to telling the stories of many in the community, including those in attendance.