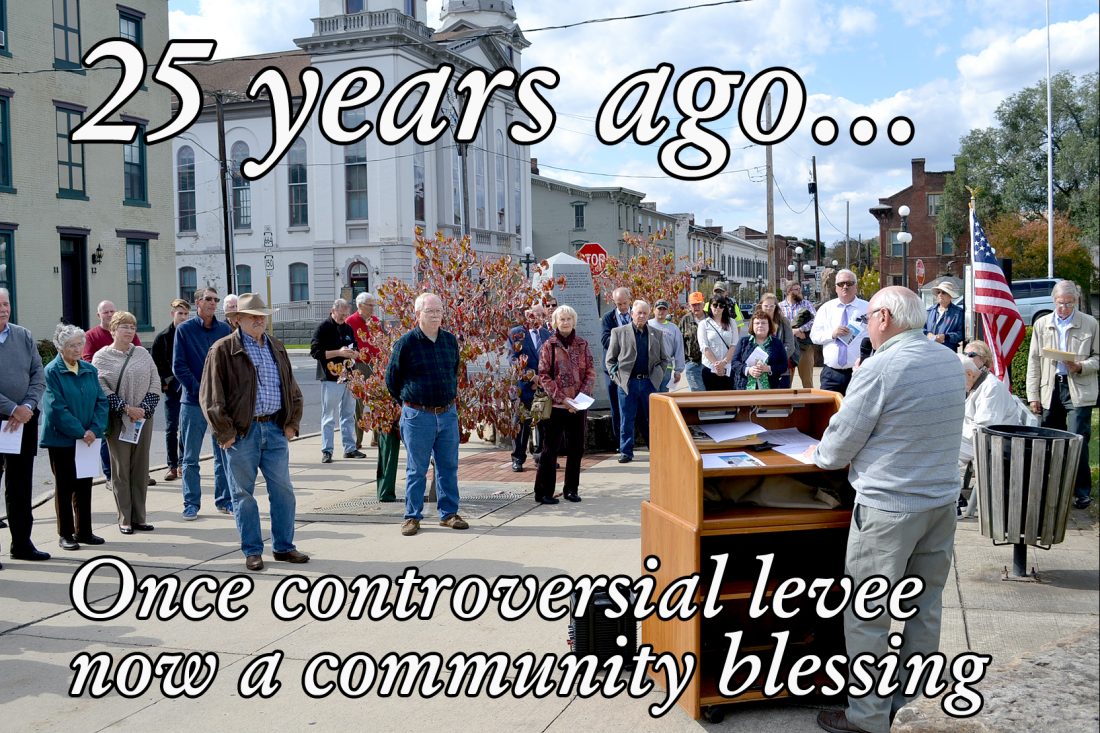 LOCK HAVEN — On a sun-splashed Monday afternoon, a host of past and present city officials, dignitaries and members of the community gathered at the corner of Jay and East Water streets to commemorate the 25th anniversary of the dedication of the levee.

A total of five people spoke about the significance of the levee and its impact on the city of Lock Haven and community in general. 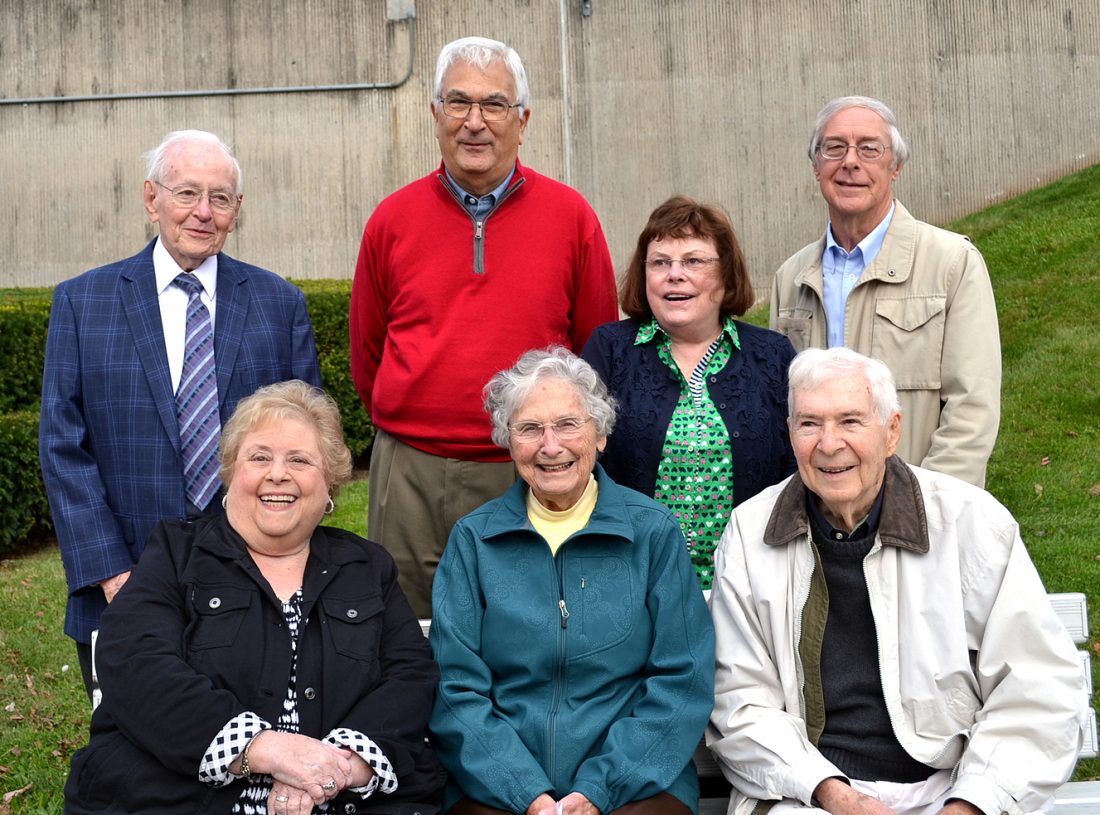 Terry Shultz, chairman of the Lock Haven Area Flood Protection Authority, was the master of ceremonies for the afternoon.

“We recognize that the project was not without controversy, but we feel that the overall benefits to the community have been proven,” Shultz said.

Shultz talked about the history of the levee, which was largely funded through outside sources. The city, he said, completed a bond issue in 1990 in the amount of $4.4 million as the local cash share of the $70 million project.

The levee’s groundbreaking took place on Oct. 3, 1991. Construction was conducted in three contracts and completed three years later in 1994.

“In addition to the flood protection it provides, the levee has provided economic and development benefits. It removed flood plane restrictions on construction within the flood plane in the city,” Shultz explained. “It eliminated the need to elevate structures, allows development at ground level and significantly reduces the need for flood insurance for property owners.” 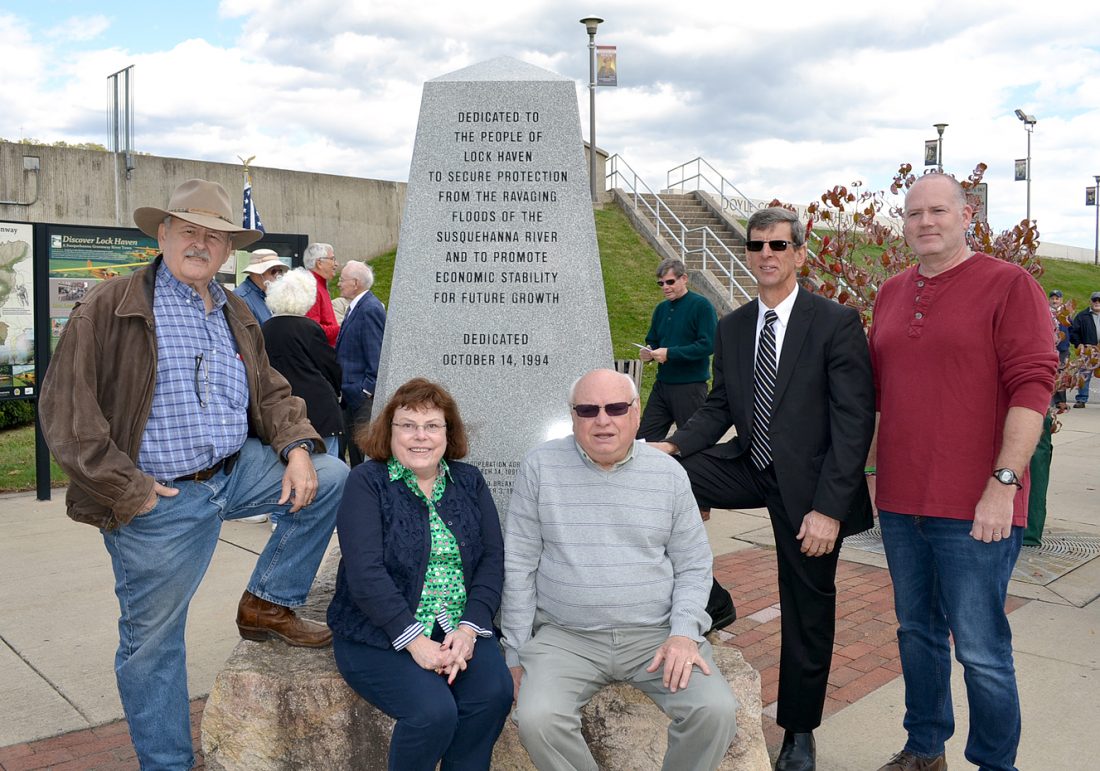 LANA MUTHLER/THE EXPRESS Members of the Lock Haven Area Flood Protection Authority are shown in front of the monument that was placed near the corner of Jay and East Water streets 25 years ago. From left are Tom Frank, June Houser, Terry Shultz, Mark Stern and Aaron Russell.

“The project has provided recreational activities, with a lighted walkway, beach and bathhouse, amphitheater, fishing access, canoe portage and boat launch. These facilities have been embraced by the community to greatly enhance recreation in the area, and helped to make the levee an accepted fixture in the community, Shultz continued.

“We recognize and appreciate the foresight and dedication of those individuals who pursued this project to bring it to fruition for future generations,” Shultz said.

“Our big thing is saying thank you, thank you, thank you to everyone who participated in getting us a beautiful levee, a working levee that has protected the city at least three times in modern history and I’m sure it will in the future also,” Stevenson said.

JoAnn Bowes, who is currently on the Flood Advisory Committee, talked about the significance of the committee.

“There has been a citizen’s levee advisory committee since the proposal for a committee was implemented some 25 years ago. That committee has met several times a year since … there has never been a lengthy period when the committee did not have a full complement of members,” Bowes said.

She stressed the importance of the younger generation stepping up to join the committee.

“It is the sincere hope of the current committee that new members will join as older members retire. There remains an ongoing necessity for citizen interest in the project,” Bowes said.

Mike Flanagan, president of the Clinton County Economic Partnership, talked about the economic impact that the levee has had on the community.

“We have economic protection as a result of this levee flood system. It has also impacted businesses, property and life,” Flanagan said.

He pointed out that International Paper Company — now First Quality — played a large role when the levee was built.

“That obviously worked out very well for our greater community,” Flanagan said.

The last speaker of the afternoon was June Houser of the Lock Haven Area Flood Protection Authority.

“I do want to acknowledge everyone who is here and tell you how grateful we are for your continued support,” Houser said. “This project was mind-boggling as well as nerve-wracking, but it is a beautiful project.”

Also mentioned for their role in securing funding at the state and federal level were State Sen. J. Doyle Corman, for whom the walkway atop the levee was named, and U.S. Rep. William Clinger, for whom the amphitheatre was named.

Following the anniversary ceremony, those in attendance stayed to talk among themselves about the levee project.

Houser is the only one of the five members of city council who voted to float a bond to finance the city’s share of the levee project who is still alive today. Others on council at that time were Alfred Hoberman, Joe Nevins, Diann Steumpfle and George Shade, all of whom have passed away.

But some of their spouses were on hand at the celebration and shared a word or two about the levee controversy 25 years ago and what it meant to their husbands and wife.

Joanne Hoberman, wife of late Alfred Hoberman said her husband would be very proud to see this gathering of people for the 25th anniversary of the dedication of the levee.

And June Nevins, wife of late councilman Joe Nevins, smiled as she talked about her husband’s strong belief in the levee.

“He would have thought this was great. He was so proud of what they did. We’re so proud of them. They worked so hard,” June said as she sat beside Joanne Hoberman and the two remembered the controversy that pitted friend against friend and neighbor against neighbor.

Mayor Diann Steumpfle, who served as the city’s mayor and a council member for 24 years, fought hard for the levee, according to her husband, Dr. Richard Steumpfle.

“Oh, I remember the threats… people sent her black roses,” Dr. Steumpfle said. “City police officers walked her home and cruisers parked all night in front of our house.”

Diann was determined to see the levee built, her husband said.

“She said, ‘we’re going to have it, and we did,'” Dr. Steumpfle said of his late wife’s will power and tenacity to see the flood protection project completed. “She was so proud of it.” 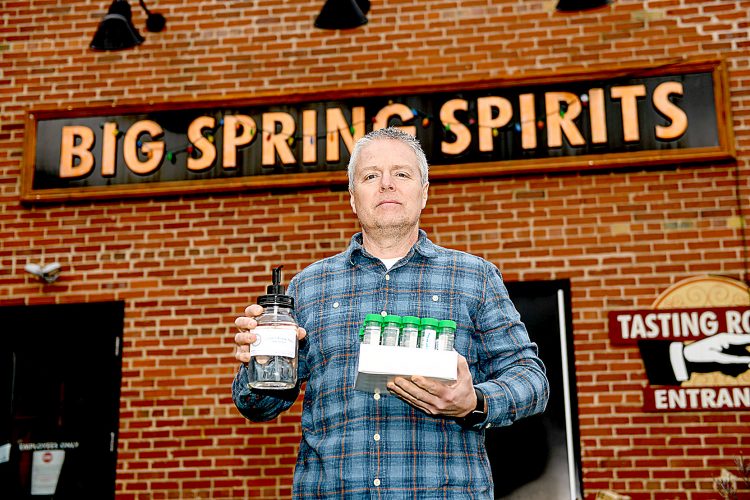