Probationers sentenced for debts they can never pay? 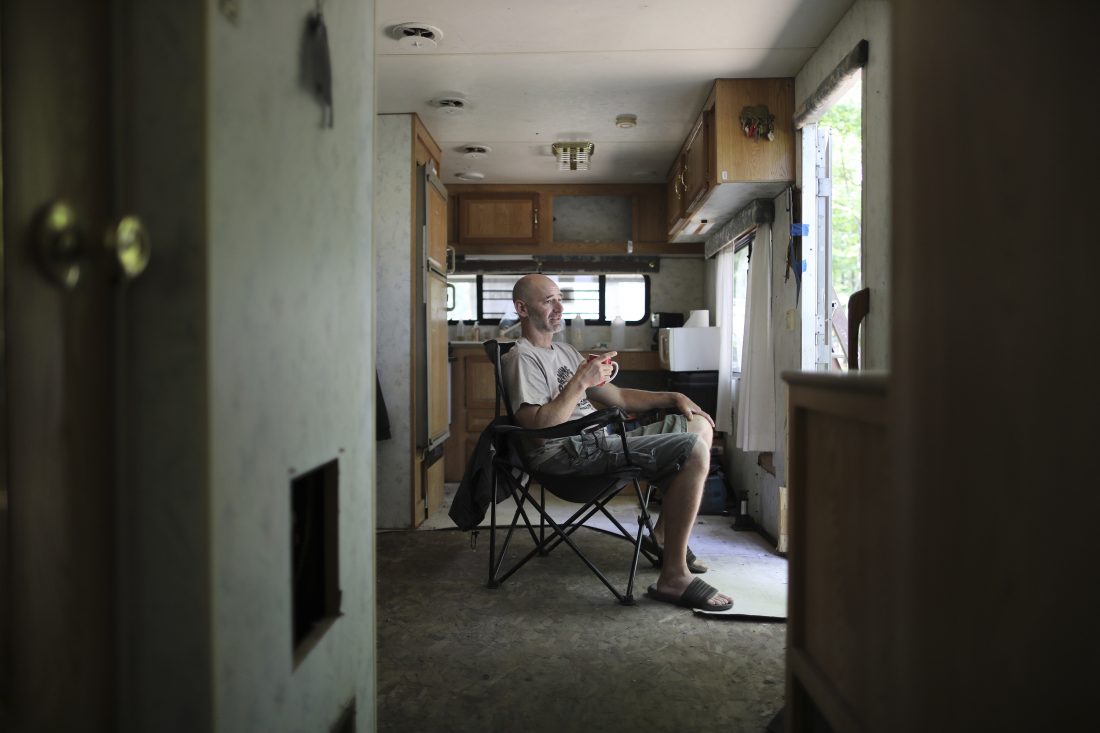 David Swanson/The Philadelphia Inquirer via AP Michael Mastrocola, who is living in a campground in Quakertown Pa., is on probation for 20 years for one nonviolent crime.

PHILADELPHIA (AP) — A decade after he was first sentenced in Philadelphia Common Pleas Court, Maurice Hudson still could not come up with $1,941 in outstanding court costs — and, at a February hearing, it was clear Judge Genece Brinkley was out of patience.

“Each time, he has come back here with excuses,” Brinkley said of Hudson, who at 19 was convicted of a robbery and sentenced to two to four years in prison.

“I’m struggling out there on the streets,” Hudson, now 29, told her. He had come home on probation, gotten married, and become a stay-at-home father of two young girls with special needs. He earned only $150 a week as a part-time janitor. “I keep hearing it every time I come in front of you, ‘I’m not trying.’ How is it I’m not trying?”

To Brinkley, there was only one way to teach Hudson: an additional 1½-to-3-year sentence in state prison. She said it was “absolutely necessary to vindicate the authority of the court.”

Appeals courts have ruled people cannot be incarcerated for nonpayment without a determination that they are actually able to pay. Yet, in Hudson’s case, said Cheryl Brooks, a Philadelphia public defender, “he was essentially jailed for his poverty.”

Hudson’s case illustrates a reality for hundreds of people on probation or parole across Pennsylvania: Failure to keep up with court-ordered payments remains a common reason for judges to revoke supervision and impose more probation, more parole, or even more incarceration, keeping people under court control for years on end.

“It’s an ongoing, systemic problem,” said Andrew Christy, an attorney with the ACLU of Pennsylvania. He wrote, in an amicus brief in Hudson’s case, that the practice “turned Pennsylvania’s jails into a form of modern debtors’ prisons.”

Last year, Hudson spent about six months in Delaware County jail for falling behind on $350 in monthly child support owed to his older daughter. He said the repeated incarceration was a barrier to getting on his feet; he was home just over a month when he was incarcerated again for the probation violation.

Brooks filed an emergency bail petition with the state Superior Court, which ordered Brinkley to rule on it “without delay.” Six weeks later, on Oct. 4, Brinkley denied the petition. Brinkley did not respond to interview requests.

‘When that cycle ends, I don’t know.’

Though poor defendants are entitled to be provided legal representation, that does not mean access to the justice system is free.

Court fees — even for indigent defendants — average more than $1,000 per case across Pennsylvania. The median court costs imposed on indigent defendants in the region range from $537 in Philadelphia County to $1,652 in Delaware County, an ACLU of Pennsylvania analysis found. That’s in addition to fines and restitution the court may impose.

For those who spend years on probation or parole, as Hudson did, costs can pile much higher. In addition to assorted fees — $250 for a DNA detection fund, $50 toward the cost of prosecution, $8 for a judicial computer project, $5 for a firearm training fund — he was assessed almost $800 in supervision fees.

In many cases, these costs appear uncollectible: The ACLU found that among defendants poor enough to be assigned public defenders, court costs were paid in full in just 24% of cases over 10 years. Among non-public-defender cases, 54% had paid in full.

“It tends to be the people who are not paying are the ones who have no ability to pay,” Christy said.

In Philadelphia and other counties, public defenders have been campaigning over the last year for judges to waive court costs for indigent defendants, arguing they are obligated to take defendants’ means into account. That question is now before the state Superior Court, which ruled in September that judges did not have to do so — but recently, unprompted, withdrew that opinion, opting to put the question before a judicial panel for further review.

But costs and fines across Philadelphia and its four suburban counties brought in $273 million over the last 10 years, according to the Administrative Office of Pennsylvania Courts — making them a critical part of courts’ budgets.

And, in some local counties, judges routinely impose punishments on people who can’t or won’t pay, generally without distinguishing between the two.

In Delaware County, dockets show some people have been sentenced 10 times or more on a single case, with sentence conditions emphasizing paying fines, court fees, or restitution. In some cases, the judge threatened detention in the event of a single missed payment. In others, judges promised early termination once costs were paid.

Defense attorney Mike Malloy described court-imposed costs and restitution as the No. 1 reason keeping his clients on probation in Delaware County.

“These guys don’t have employment to pay them off, so they’ll extend the time,” he said. “When that cycle ends, I don’t know.”

If a client were to hire him to handle the violation, he’d request a hearing to evaluate the client’s ability to pay. But anyone who can’t afford to pay court costs, he noted, also can’t afford a lawyer. So, he said, “I can’t remember in Delaware County court the last time a hearing like that took place.”