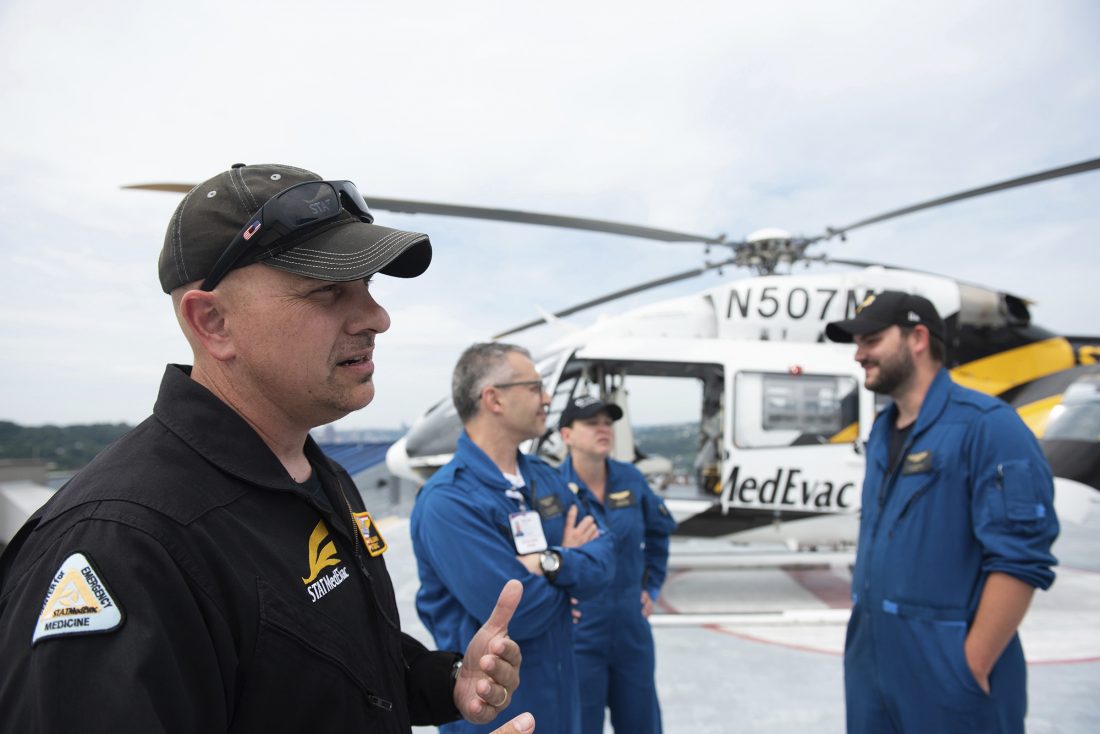 Christian Snyder/Pittsburgh Post-Gazette via AP Jesse Janay, a pilot with UPMC's transport medicine program, stands in front of crew members and the helicopter atop Children's Hospital in Lawrenceville, Pa.

PITTSBURGH (AP) — After a horse kicked her in the head in 2015, the unconscious woman took a 16-minute ride on a LifeFlight helicopter that saved her life.

In a race against the clock, Christine Holt, 54, arrived at Allegheny General Hospital in Pittsburgh with only minutes to spare to undergo surgery to relieve dangerous levels of pressure against her brain due to bleeding.

Her case exemplifies the sophistication of equipment and treatment inside modern medical helicopters, all while studies are focused on assuring that helicopters are used only when necessary due to the cost per trip that can reach $50,000 and higher.

But research is clear that for patients with serious injuries, trauma or medical situations, when survival clearly is in question, helicopters can save lives.

That was the case with Holt.

That Oct. 17, the Chicora, Butler County, resident was atop a Morgan horse and ready for a second test ride to determine if she wanted to buy the gelding. Another woman planning to ride with her checked Holt’s saddle and then went inside the stable to prepare her own horse.

That’s when the woman heard Holt cry out, “Whoa, whoa!” and then go silent.

The mother of two teenagers had been thrown off the horse and kicked in the head on her way to the ground, causing head injuries and bleeding that put life-threatening pressure on her brain.

Inside a LifeFlight helicopter, the crew stabilized her and prepared to take her immediately into surgery at Allegheny General. She was told by medical staff afterward that she likely wouldn’t have survived had she arrived five minutes later.

“I was banged up with a head injury in the shape of a horseshoe,” she said.

Unconscious for 11 days, she then underwent a month of rehabilitation and has fully recovered.

She didn’t buy the horse.

Allegheny Health Network’s LifeFlight is 41 years old this month, and UPMC’s STAT MedEvac is celebrating its 35th anniversary this year. These services have expanded significantly over the past four decades, with so many helicopters twirling overhead — especially for Pittsburgh neighborhoods that host hospitals — that unsuspecting residents might think military operations are underway.

What once were flying ambulances — hurrying people to hospital intensive care units as fast as possible — have been transformed into flying ICUs, keeping patients alive and stable with blood transfusions, portable pharmacies, and modern equipment, protocols and treatments. That means crews upon landing can roll the patient straight into surgery or a heart catheterization lab, where a thin tube is inserted in an artery or vein in the groin, neck or arm and threaded through blood vessels to evaluate the heart.

“What we’ve seen is that some people think flying a helicopter becomes a faster way to move a patient to the hospital. But the reality is it’s a faster way to get critical care to the patient,” said STAT MedEvac President and CEO Douglas Garretson.

LifeFlight’s James Palafoutas, director of AHN’s Prehospital Care Operations, said what medical crews accomplish in the back of a helicopter is “quite impressive.”

“We’ve had multiple cases where crews went right into the operating room with a patient.”

“Medically speaking,” said Dr. Matthew Poremba, medical director of Allegheny Health Network’s LifeFlight, “we take care of patients as if they are in an ICU in a tertiary care hospital — the Allegheny Generals or (UPMC) Presbyterians — and transport the sickest of the sick and put people on heart-lung bypass if their heart is failing.”­­­