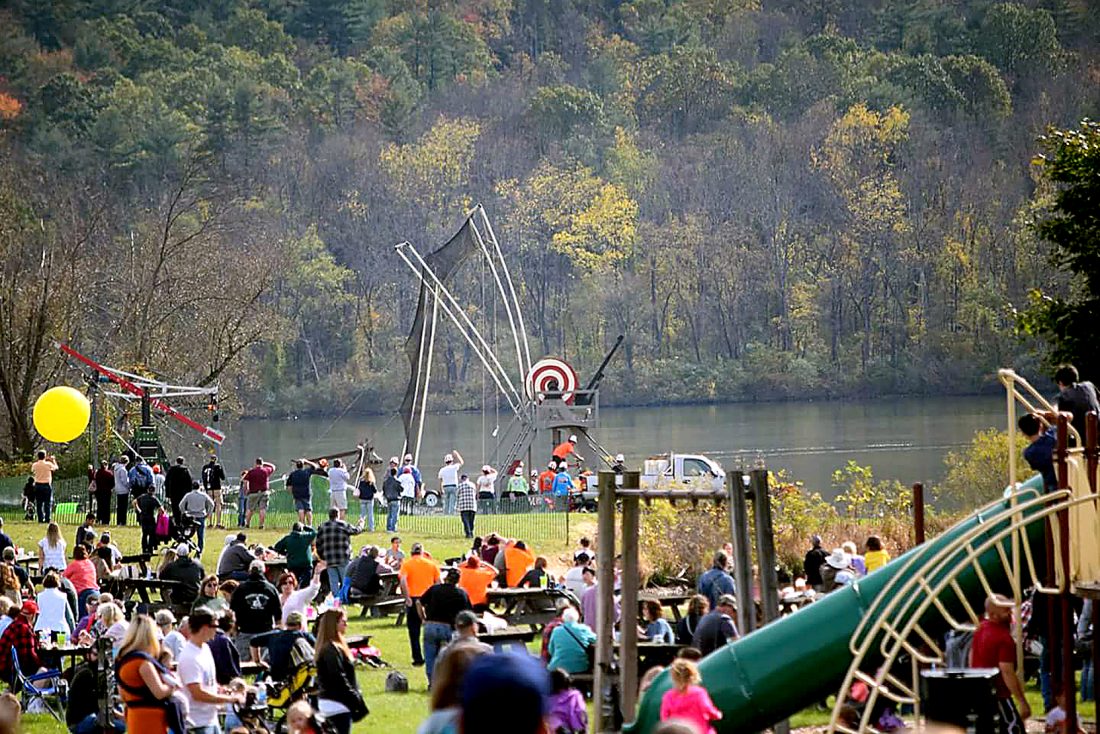 HOWARD — All eyes are on the weather forecast for Saturday hoping for a bright, sunny day for the 9th annual Punkin Chunkin Fall Festival sponsored by the Howard Fire Company.

The fall festival is held at Bald Eagle State Park from 10 a.m. until 5 p.m. and there’s something for everyone at the festival.

Punkin Chunkin began as an idea of George Demchak, a Howard resident and fire company volunteer. George and his wife Anne frequently vacation at Rehoboth Beach in Delaware where Punkin Chunkin has been popular since the 1980’s. It was on one such vacation 10 years ago that George decided this was what the fire company needed to try as a fundraising event.

“We have Sayers Lake right here with the perfect beach and park grounds ideal to set up the trebuchets to launch out across the water. If we can add some food and craft vendors and a few little extras to draw about 500 people in for the day we could earn a few thousand dollars for the fire company. There’s nothing else like it in our area so it might be something that will interest people,” Demchak said.

Demchak, a real estate agent by profession, made up his mind to bring the suggestion up to his fellow firefighters at their monthly meeting and many there thought the idea was worth asking the officials at Bald Eagle State Park and the Army Corps of Engineers for approval to hold such an event.

Demchak put together his plans for the event, and summoned a meeting with the park officials and approval was granted to hold the first Punkin Chunkin in October 2011. He then set about finding sponsors and vendors willing to attend with a goal of having about 500 people come to the event the first year.

As event day drew closer, the only thing that worried George was that he hadn’t gotten any commitments from any trebuchet teams to travel to Howard for the one day event.

“Centre County isn’t exactly on the competition circuit that the chunkers follow, and we couldn’t very well have a Punkin Chunkin without trebuchets there to launch the pumpkins,” remarked Demchak.

Josh Collins and his wife Becky moved to Howard in the spring of 2005 from Ulysses. Josh and his father had both been involved with the Genesee Volunteer Fire Company in Potter County for many years. New to Howard, Collins had become friends with neighbors and those in the community that were volunteer firemen and emergency medical responders who had encouraged him to join the fire department, but things were hectic with work, building a new home and starting a family, that he had put off making application to become a member of the fire department.

“I had stopped at some accidents before the fire company arrived on scene a few times and I had to make a 911 call for help at my own house when a friend was injured, so that along with seeing a sign on the fire company marcee that volunteers were needed prompted me to actually take the step to join the fire company in 2010,” said Collins.

“I had never heard of Punkin Chunkin before, and one evening when I was attending one of the fire company meetings George Demchak was talking about not having any trebuchets or chunking teams coming to the festival. George seemed distraught about the situation, and I was just new and curious enough to ask some questions about what type of pumpkin launching machine he was looking for.”

Collins is a PSU graduate and a civil engineer by profession, so at some point those magical words that Demchak had been waiting to hear flowed from Josh’s lips.

“I guess I ended up saying that I was pretty sure that I could build something that would throw a pumpkin and that’s where it started”, Collins remembered.

Collins did some research and talked with his employer, Stahl Sheaffer Engineering in State College. The engineering firm was on board with the idea and even agreed to cover the cost of materials and some man-hours for the design and the construction of a trebuchet. Collins and coworker Jamie Merrill at Stahl Sheaffer worked on a design and over the course of about six weeks Collins built the trebuchet in his own garage.

In the meantime, Collins had reached out to a few other engineering firms to see if others would have an interest in designing and building a trebuchet so that we could have some competition on the day of the fall festival event. Michael Baker Engineering responded to the challenge and they constructed a trebuchet as well, so there were two pumpkin launching machines for the first Howard Punkin Chunkin.

Howard Fire Company’s trebuchet is proudly named “Stand Back and Watch This” and the hometown trebuchet has been a staple at each of the annual events.

The first Punkin Chunkin Fall Festival day arrived, and no one was prepared for the turn-out of people. Demchak and the food vendors were hoping for 500 people to show up. He likened it to one of those ‘Field of Dream’ moments where if you build it they will come.

And come they did — some 9,000 people attended the first Punkin Chunkin. The second year nearly 20,000 people came and it’s been well attended each year bringing more than 100,000 visitors to the state park. The fire company had a unique venue and the park officials were pleased, too.

Fire company members travelled to the World Championship Punkin Chunkin in Bridgeville, Del. in 2011 to meet other chunking teams there to promote the annual event. There they met Fat Jimmy Fuller, the Discovery Channel celebrity who dubs himself as the ‘Lord of the Gourds’, and eventually Fat Jimmy made his way to Howard for a Punkin Chunkin Festival guest appearance.

It was in 2016 that the Punkin Chunkin event had to be cancelled at the last minute due to flooding at Bald Eagle State Park. Late on Thursday night and early into Friday morning just before Punkin Chunkin Saturday a torrential rain storm dumped more than five inches of rain on the Centre County area.

Howard Fire Company volunteers were up all night responding to Milesburg with their water rescue boats to evacuate residents from their flooded homes and also to safely move patients from the flooded Eagle Valley Personal Care Home to dryer ground. All day long on Friday the firemen responded to an uncountable number of calls to pump basements and as evening fell the firemen were nearing exhaustion.

As the flood waters receded from basements and back into the banks of creeks and streams, the water level at Bald Eagle State Park rose dramatically. The roadway into the park was covered with nearly two feet of water and the beach area was well submerged. Flood debris and picnic tables floated where the food and craft vendors would have been set up. There was no way that cars could enter the park area nor could they park without sinking into the saturated grass that would have left nasty ruts for the park’s ground crew to deal with.

“It was a devastating blow to the fire company”, recalled Mark Ott, fire company president.

“The department operates on a budget of $120,000 annually and most of the funds are raised by the members throughout the year. We had done so well with the Punkin Chunkin in years prior and were looking forward to earning another $20,000 that year to cover our bills.”

Some sponsors were nice enough to allow the company to keep their tax deductible donations and some vendors opted to allow the fire company to keep and use their registration fee towards the 2017 festival. This was a welcomed relief, but the fire department was still down some $15,000 of revenue that was desperately needed to see it through the end of 2016.

As news spread quickly on Facebook and local TV channels of the flooding and financial impact the festival cancellation would have on the fire company, donations began to come in. The donations didn’t total what would have expected from holding the festival, but they certainly were appreciated and came when they were needed most.

This year there will be nine chunking teams with their machines here for the day including nationally known launchers Skypult and Smokin Llamas in addition to Howard Fire Company’s own Stand Back and Watch This. The event runs from 10 a.m. until 5 p.m. and pumpkins are launched all day long.

There are 25 food vendors scheduled for arrival on Friday afternoon and more than 50 craft vendors will be setting up for the event.

Patrons will be able to take a hay wagon ride through the park to enjoy the sights of autumn. There will be a bounce house for the kids to enjoy and a pie eating contest that’s open to all ages.

Commemorative t-shirts in a hunter green color will be available, and if your size is sold out you can place an order for delivery in a few weeks.

This year the fire company has their own air cannon for the event. Thomas Frazier of Mt. Airy, Maryland recently sold his air cannon named Chunk ‘N Ology to the fire company for festival use. This machine won third place at the 2008 World Championships with a shot of over 4,000 feet.

Admission and parking are free for the event. There’s only one way in and one way out of Bald Eagle State Park so traffic can seem congested, but if drivers just go slow and stay alert to those directing traffic there should not be any problems. Remember to bring a lawn chair to sit more comfortably for the day. Dress for the outdoor temperatures remembering that it’s usually cooler and that it tends to be windy near the lake so bring a jacket just in case.