Wood carvers use chainsaws to turn logs into pieces of art 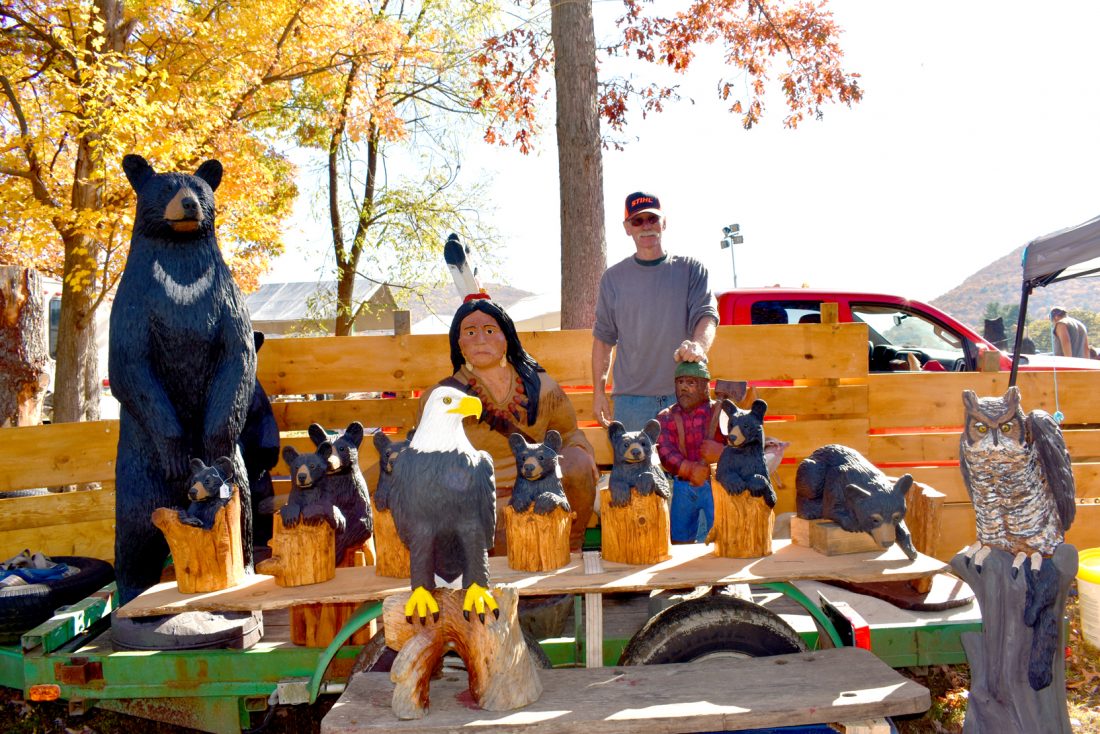 LAURA JAMESON/THE EXPRESS Kraig Brady, of Frontier Reflections, stands among the many pieces on display at the Hooskow. His favorite is the Native American to his right.

McELHATTAN — Chainsaws are buzzing and woodchips are flying signaling another year of the Hooskow.

Carvers from all across the country have already fired up their chainsaws and were hard at work Thursday afternoon at Restless Oaks Restaurant.

Patrick Holbert, of Dalton, Ohio, was in the middle of carving an eagle, the pointed beak and eyes just starting to show. 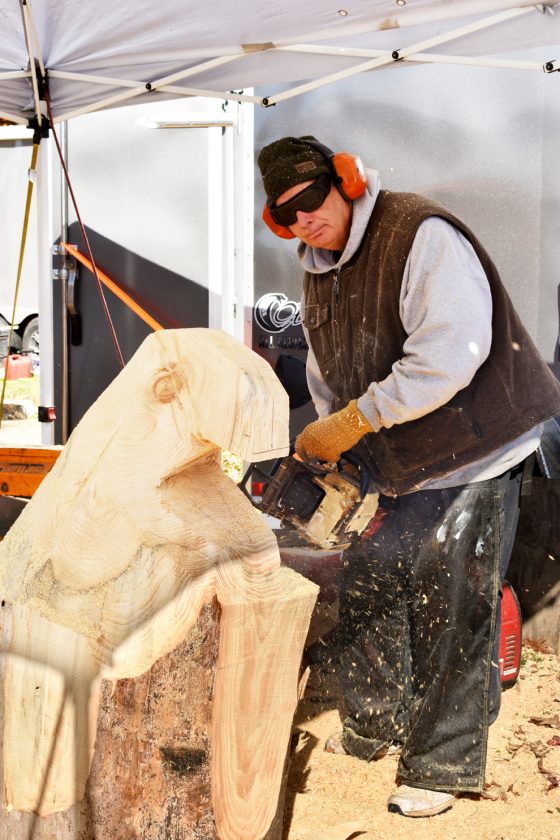 LAURA JAMESON/THE EXPRESS The shape of an eagle can be seen in this carving being worked on by Patrick Holber, of Dalton, Ohio.

His wife Robyn said they’ve been traveling to Pennsylvania for the past three years to join in on the Hooskow. “We love to come out this direction because it’s so beautiful,” she said.

Patrick has been carving for 15 years after retiring from his job as a teacher. He’s traveled all over the country and all over the world even, Robyn said.

“I’m the sales girl,” she said with a smile as she stood next to rows of Patrick’s finished pieces.

A short walk from Patrick and Robyn is Bellefonte native Bobby Gummo.

Gummo was in the middle of putting finishing touches on an eagle made out of cedar, a rare wood to work with, he said. 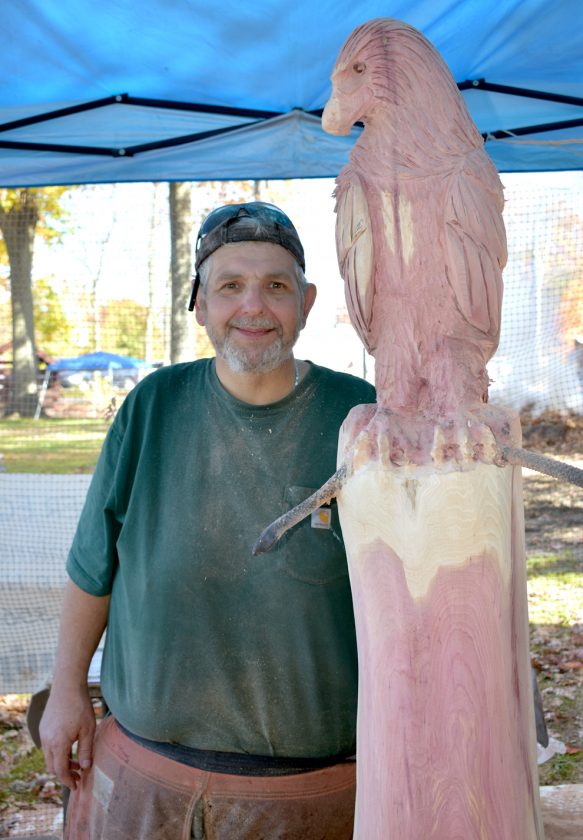 LAURA JAMESON/THE EXPRESS Bobby Gummo, of Bellefonte, stands next his eagle carving made out of cedar. He started the piece on Wednesday evening.

Bobby has been coming to the Hooskow for the past three years, enjoying the chance to meet new people and learn new things about his craft.

“I like the camraderie with the local carvers,” he said. “It’s helpful in learning new techniques.”

Next to Bobby, Greg Peachey, of Lewisburg, was carving a bear statue from a big chunk of wood. Saw dust flew every which way as Peachey added little details here and there on the large piece.

Another local carver, Kraig Brady, was placing some of his finished pieces on makeshift shelving and on his trailer.

Kraig, a former art teacher at Keystone Central School District, has been carving since he was 12 years old, even owning his own business, Frontier Reflections, at 1824 Dutch Hollow Road, Jersey Shore. 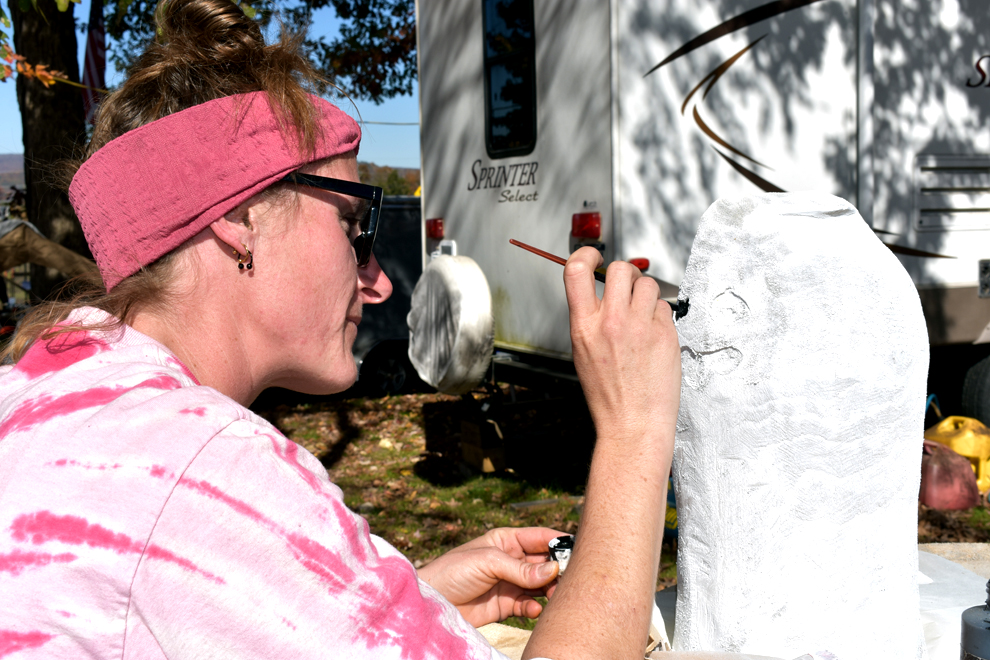 LAURA JAMESON/THE EXPRESS Debbie Tompkins, of Lamar, paints eyes on this ghost carving her husband carved. The couple has been attending the Hooskow for years, she said.

He’s been attending the Hooskow ever since it started in 2015.

“It’s inspiring to see other carvers of every different skill level here,” he said.

Jeffrey Donoughe, the founder of the Hooskow, was working on some pieces throughout the afternoon.

Donoughe and Mike Saar, of Saar Tree Trimming, began the event four years ago to give professional chainsaw carvers a place to gather and share ideas.

Donoughe and approximately 12 carvers will be in McElhattan through Saturday working on pieces to sell at an auction on Saturday at 2 p.m. 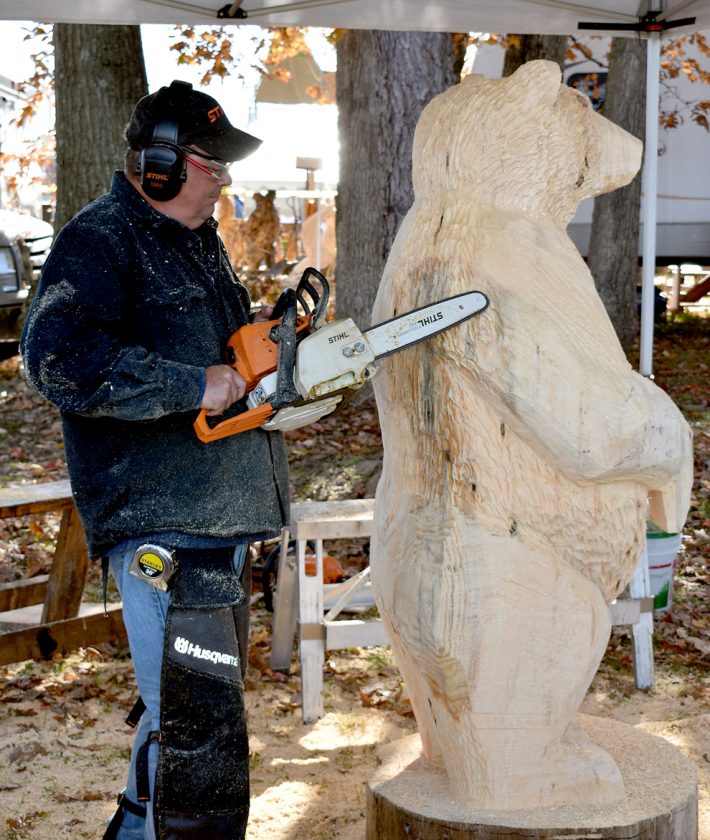 LAURA JAMESON/THE EXPRESS Greg Peachey, of Lewisburg, puts some final touches on this sculpture of a bear.

Carvers are also offering demonstrations and there are other activities for spectators to enjoy.

The weekend long event features not only carvers but door prizes, nightly entertainment, speed carves, a chili cook off and a variety of food vendors that includes Twilight Diner on Wheels, Snyder’s Funnel Cakes and Crusty Brother’s. 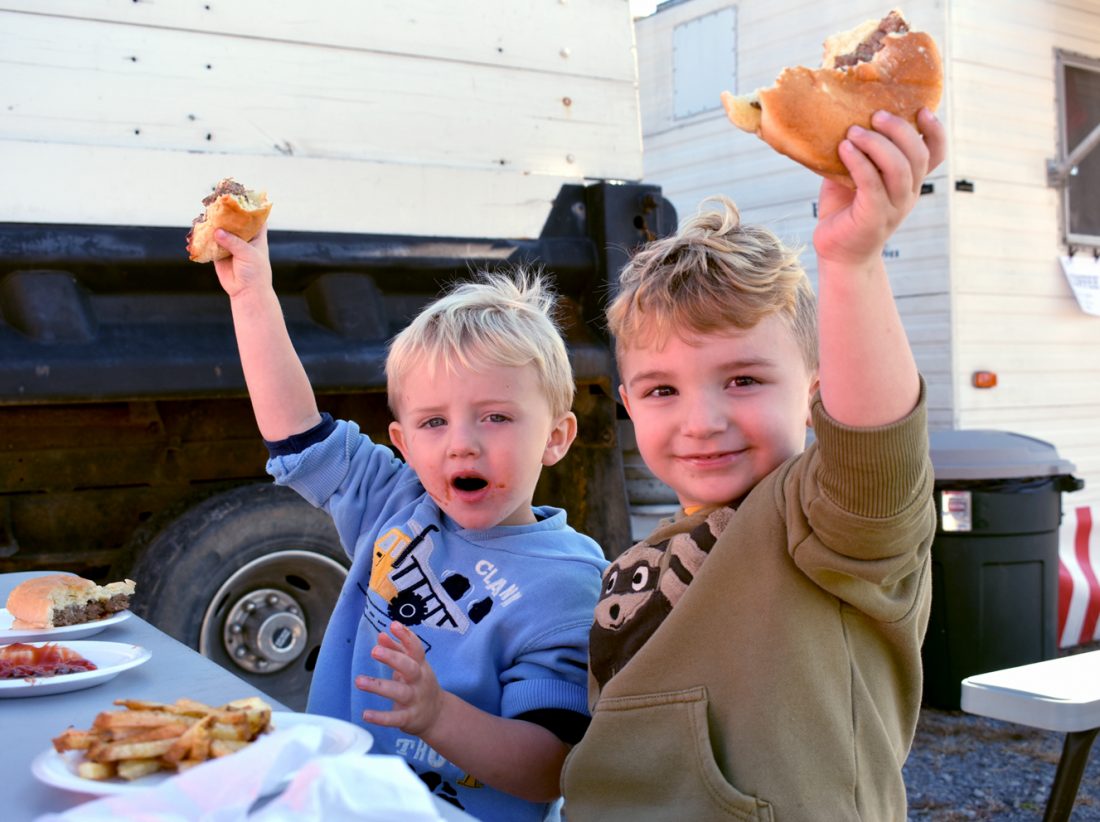 LAURA JAMESON/THE EXPRESS Layne and Wyatt Winter hold their cheeseburgers up high as they enjoy delicious food at the Hooskow. Wyatt, left, said he enjoys “the scary” carvings.