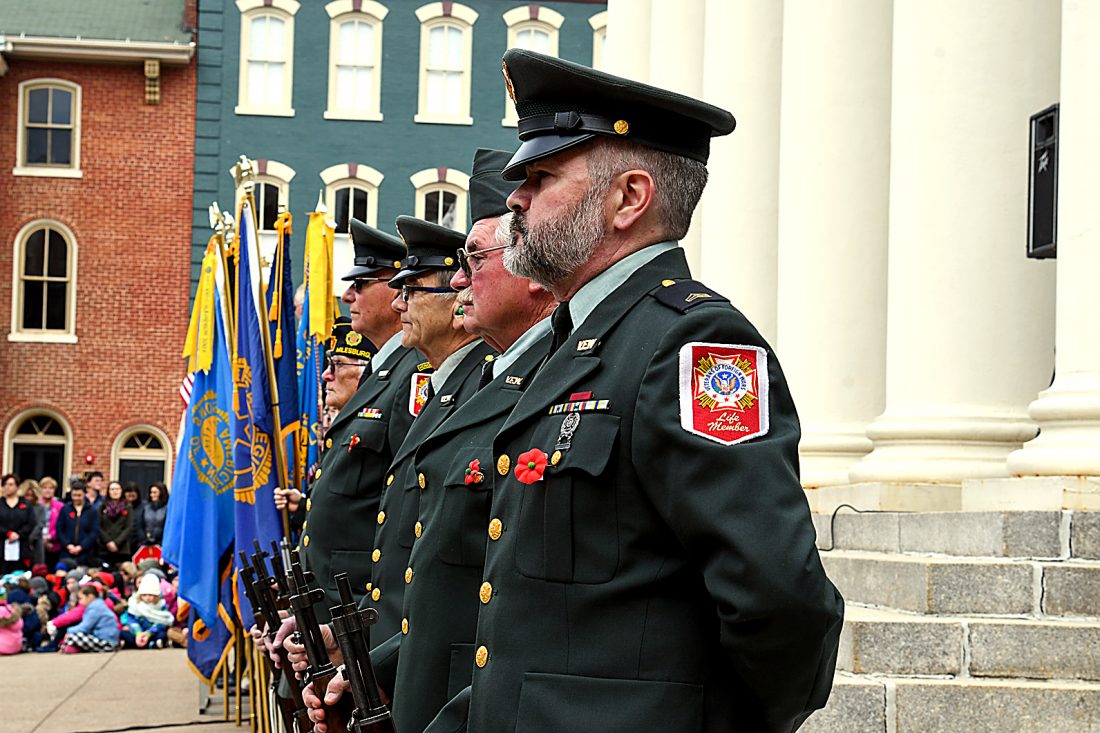 TIM WEIGHT / THE EXPRESS Members of the Honor Guard stand at the steps of the Centre County Courthouse during a Veterans Day ceremony on Monday morning. More than 200 people attended the ceremony, which honored those who have served the United States Military.

BELLEFONTE — A large crowd filled the lawn at the Centre County Courthouse on a brisk Veterans Day to pay tribute to those who have served during an emotional ceremony on Monday morning.

The guest speaker was Brian Querry, the director of Veterans Affairs in Centre County.

“We are here today to recognize veterans for their service and their sacrifice,” Querry said, “and we gather here to recognize the veterans in our community.” 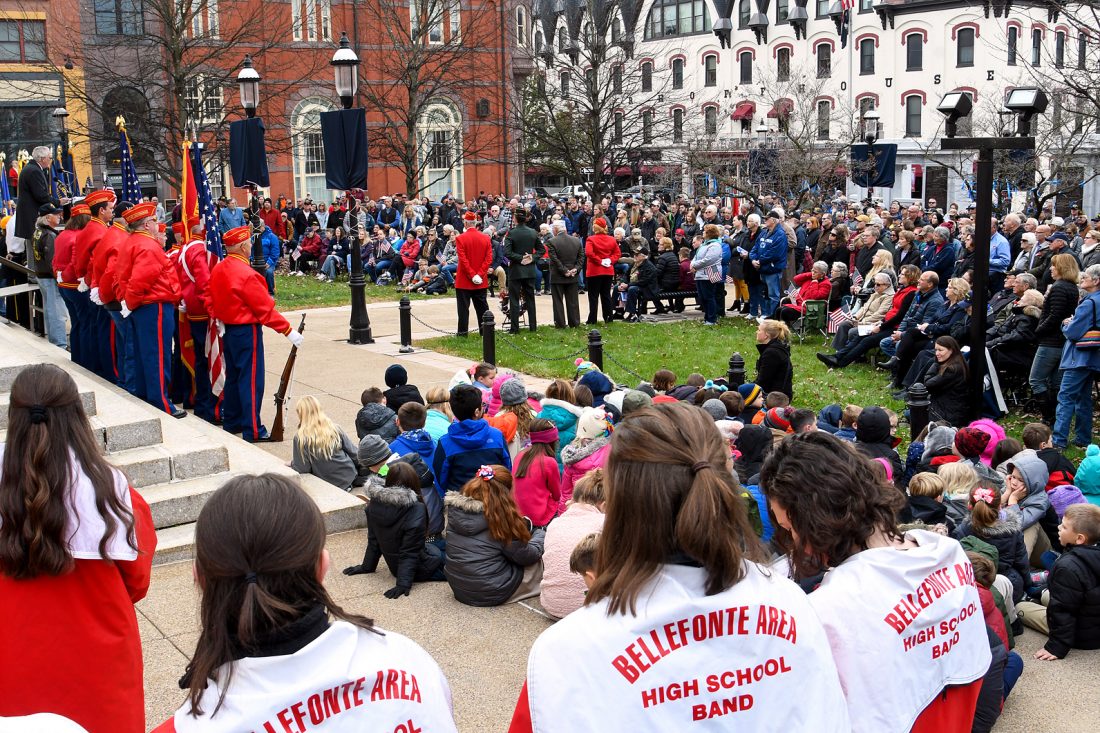 TIM WEIGHT / THE EXPRESS Members of the Bellefonte Area High School marching band watch during a Veterans Day ceremony on Monday outside the Centre County Courthouse. The band performed the “Star Spangled Banner” to kick off the program.

He said that the the group most in jeopardy are the World War II veterans, of course.

“Every year we are losing our vets. Every year, we have a net loss between 100 and 200 vets. Mostly, these are World War II vets. Rarely does a week go by that I do not get a death certificate for a World War II vet. Around six years ago, we had around 1,300. Now, we are down to less than 400,” Querry said.

There were a handful of World War II veterans in the crowd, so Querry asked that the crowd take time to acknowledge them with a round of applause.

Querry continued, asking for a round of applause for every group of veterans in the crowd.

He talked about the sacrifice that every group of veterans makes for their country — whether it was many decades ago or modern day. 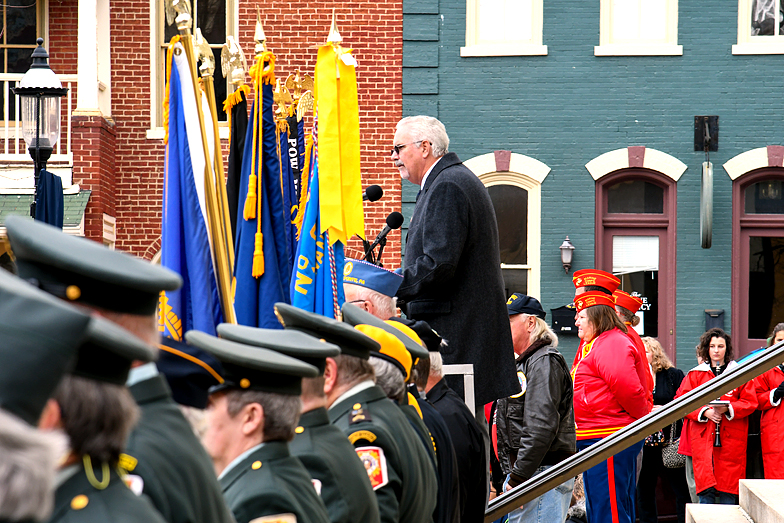 “We often forget this, but currently, we are still at war. The Persian Gulf War, which was started on Aug. 2, 1990 is still ongoing. Many of these vets have experienced the hell of war, the horrific trauma of war … not knowing when they could be blown up, shot in the back or whatever,” Querry said.

There are many ways to help veterans, Querry said. One of the biggest is medically, he said.

“One of the main things we have learned through wartimes is to give (veterans) major medical as soon as possible. Veterans are surviving horrific injuries that they wouldn’t have survived. We do have vets in Centre County who have experienced this. We owe them — that we provide their needs for the rest of their lives,” Querry said.

Querry said that the military is more than a job. It was a way of life for those who have served and is a 24/7 lifestyle for those on active duty.

“I don’t know of any job that expects you to be there 24/7, that doesn’t give you extra pay for being there 24/7. With no notice, you can be told to leave your family and be thousands of miles away and spend days, weeks and months with little or no sleep. That is the expectation,” Querry said. “They have sacrificed their time, their health. Ultimately, some of them have sacrificed their life.” 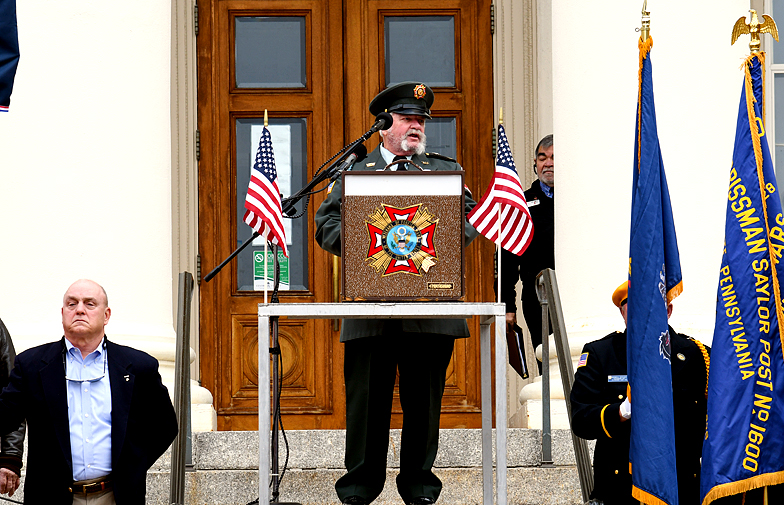 Querry said that it’s important to recognize and pay tribute to veterans not just on a special day, but throughout the calendar year.

“If you have the opportunity to meet up with a vet, engage with them,” Querry said. “Ask them, ‘where did you serve?’ ‘Where were you stationed?’ Get a feel for what they did. You may make a friend, but you may also learn something about what their sacrifice was.”

Following Querry’s speech, there was an Honor Guard Salute, a wreath placed on the Soldier’s Monument and a performance of “Taps.”

There were several dignitaries in the crowd. Newly re-elected Centre County commissioners Mark Higgins and Steve Dershem were among them.

Higgins said that he was pleased with the turnout.

“I thought it was great, very well attended and a great speaker, of course. Brian always does a nice job. Wonderful ceremony and nice to see the students participating as well,” Higgins said.

It was an emotional ceremony for Dershem, who said his late father served in the military.

“It was just amazing. To see all the effort that went into this … it was a great event,” Dershem said. “I don’t think we’ve ever seen anything of this magnitude for our veterans. It shows the appreciation this community has for our armed services and those who have paid the ultimate sacrifice.”