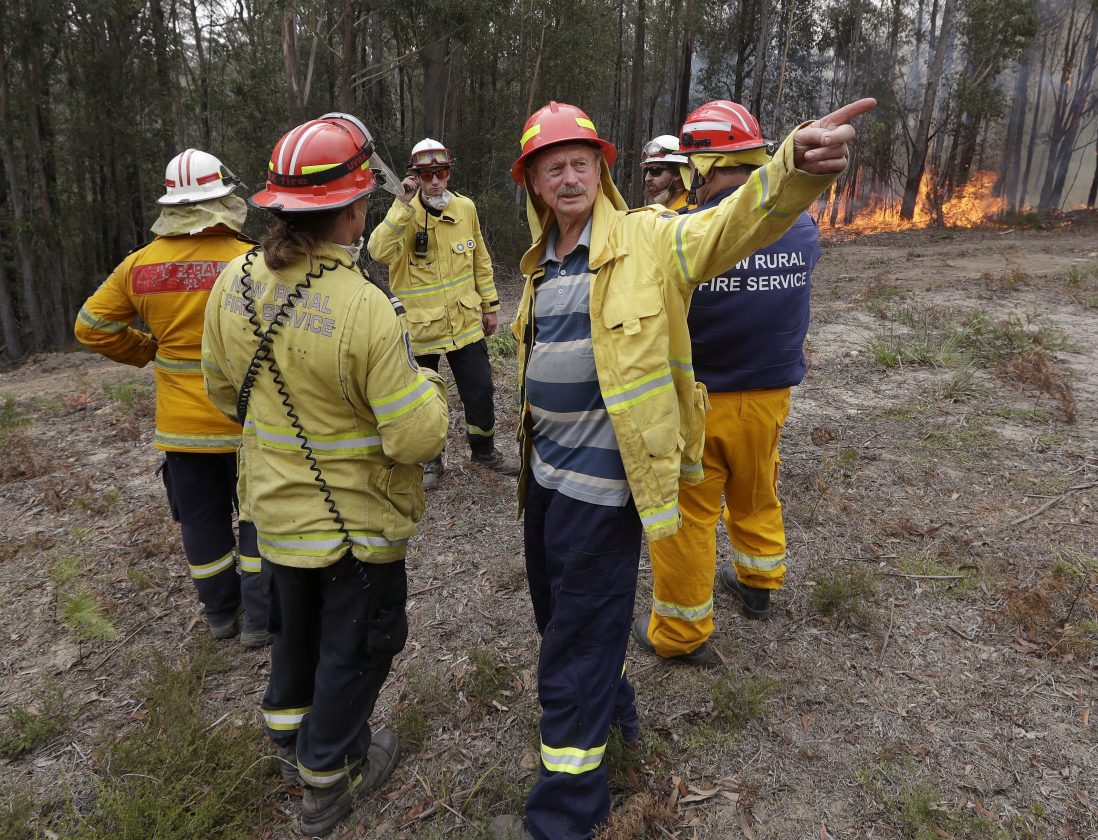 TOMERONG, Australia — The wildfire was behaving erratically last week, and Doug Schutz and his team needed to make a quick decision. So they moved a bulldozer from another job and used it to widen a firebreak. That likely helped prevent hundreds of homes from going up in flames.

If anybody was qualified to make that call, it was Schutz. He began volunteering with the Rural Fire Service in Australia’s New South Wales state some 53 years ago, at the age of 13, back when Land Rovers were used as firetrucks. Now captain of the Tomerong brigade, Schutz has also been the victim of a wildfire that burned down his business on Christmas Day in 2001.

Schutz is part of an army of 72,000 people from across the state who make up the world’s largest volunteer fire service. They’ve been at the forefront of fighting wildfires that have devastated parts of Australia since September. At least 26 people have been killed by the fires, including three volunteer firefighters. 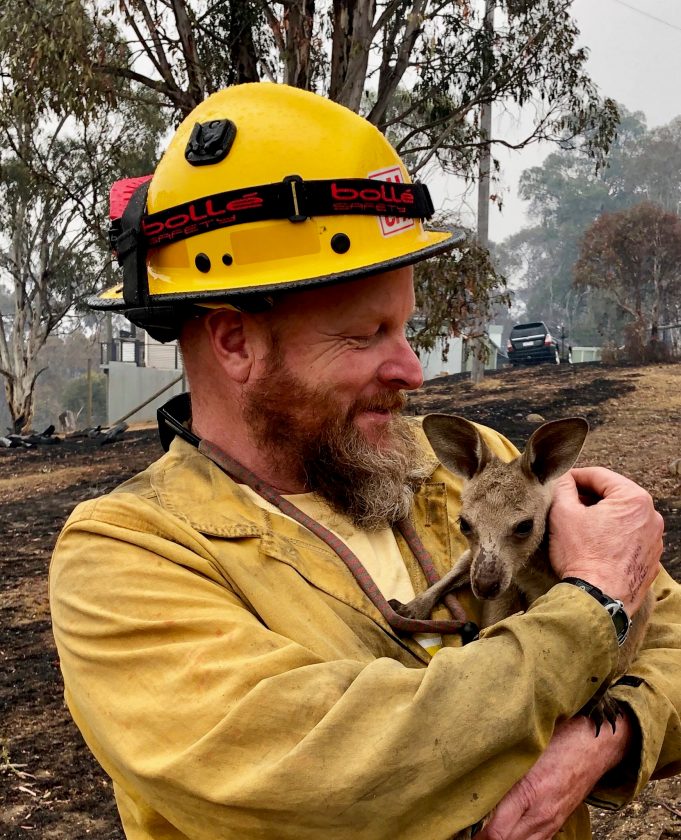 Jeremy McMahon/Bureau of Land Management via AP In this Jan. 5 photo provided by the United States Department of Agriculture Forest Service, Lake Tahoe Basin Management Unit Capt. Dave Soldavini holds a baby kangaroo that was rescued from a wildfire, in Cobrunga, Australia.

“I’ve lived here all my life, and seen a lot of fires. And this one just doesn’t want to do what it’s supposed to do,” Schutz said. “This fire has its own agenda. In some ways, I nearly think it’s got a brain. When you think you’ve got a handle on it, it will sneak around the backdoor and bite you on the bum.”

The wildfires have destroyed 2,000 homes and continue to burn, threatening to flare up again as temperatures rise.

To rural folks around the state, people like Schutz are heroes. House after house in affected areas have hung makeshift banners offering thanks to the people they call “firies.” It’s a far cry from how many Australians view their leader, Prime Minister Scott Morrison, who has been widely ridiculed for his response to the disaster.

Like the other volunteers, Schutz has never been paid a cent for his work. This season he’s been fighting the wildfires every day since Nov. 29, neglecting his own business in the process. He smiles at the irony: In his day job, he produces and sells large quantities of firewood for residential homes on his 118-acre (48-hectare) property.

People from other countries who are used to relying on professional fire services find the Australian volunteer model hard to understand, but Schutz said it’s how they like it. 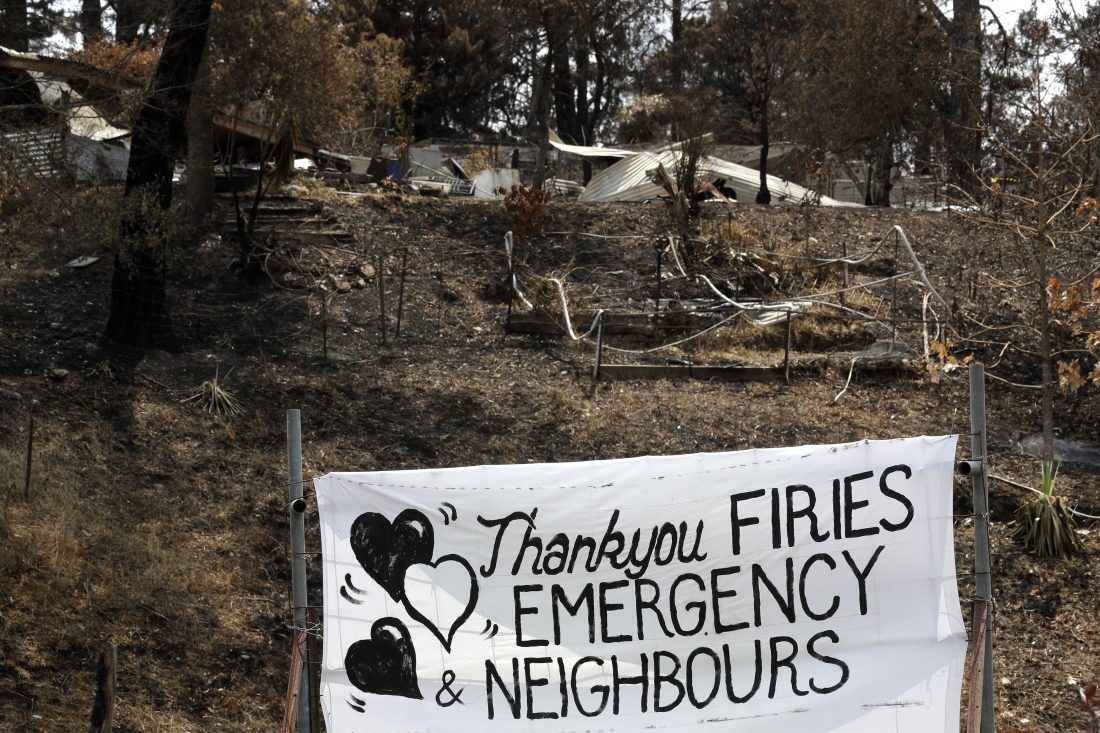 AP Photo/Rick Rycroft A sign is displayed beside a burned out house near Mogo, Australia, Thursday, Jan. 9, thanking "firies" a colloquial term for firefighters.

Gary Creer, a volunteer firefighter for 20 years, said he was in the fortunate position of being employed by the government, which doesn’t dock any pay from people who take time off to fight fires.

“But there are a lot of people out here who are self-employed, and running their own businesses, and they’re giving up thousands and thousands of dollars in lost income,” he said.

Last week, Schutz and two other brigade leaders decided to overrule objections by some to their plan to divert the bulldozer. Creer said they were proved right when the wind changed.

“They helped us steer this fire around the whole of the bay and basin area, and kept it going north, and kept us safe,” Creer said.

This week, Schutz watched on as other volunteers deliberately set alight undergrowth in the forest near Tomerong, using a mixture of diesel and gasoline. It was part of a controlled burn aimed at starving the wildfires of fuel should they approach again.

Schutz said firefighting is in his blood. His father was a founding member of the volunteer brigade in Tomerong, which has a population of about 1,000. He said his dad used to fundraise at local dances for equipment like new rakes.

“We just grew up with it. And in a community like this, local knowledge is everything,” Schutz said. “I could take you down any track, pretty well anywhere here, and tell you exactly what’s down it. So you don’t learn that in five minutes.”

Schutz said the 2001 fire was the most intense he has experienced. Fireballs the size of basketballs, fueled by leaves and brush, came raining down on the volunteers as they tried to save homes. Schutz said he and his partner, Colleen Brittain, who is also a volunteer, were too busy keeping other houses safe to consider whether their own home might be in danger.

“Then one of the brigade said, ‘You better get to your own place now,'” Schutz said. “The main fire had already gone through. So everything was on fire. The firewood was on fire.”

Schutz and other volunteers saved his house and work shed, although he said the damage to the business set him back years.

He said the size of the current fires, which have burned an area twice the size of the U.S. state of Maryland, is hard to comprehend, and he wonders how they can be stopped.

“Some other people in some other countries probably think that we’re a bunch of idiots for living here,” Schutz said. “But it’s what we are, what we deal with. And the Australian bush, although it’s a lovely place to be, is very dangerous in its own right. Obviously, for this one reason of fire, which can bite you at any time.” 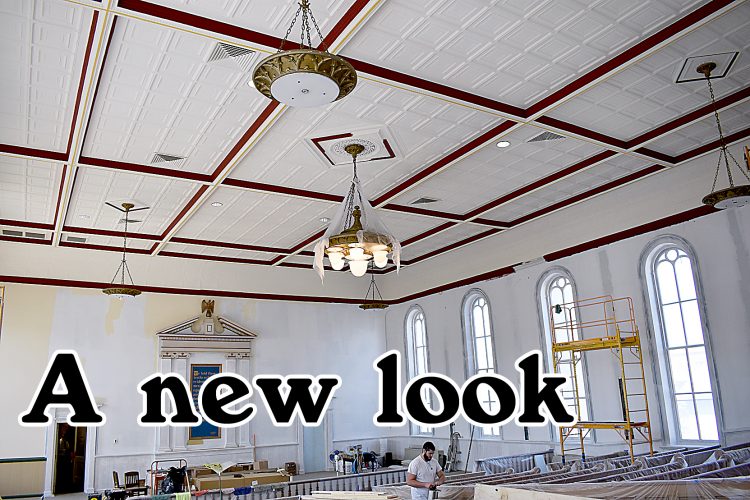 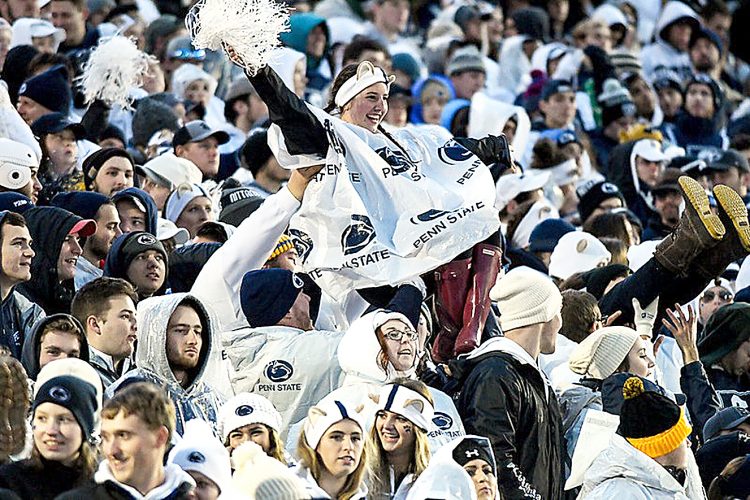