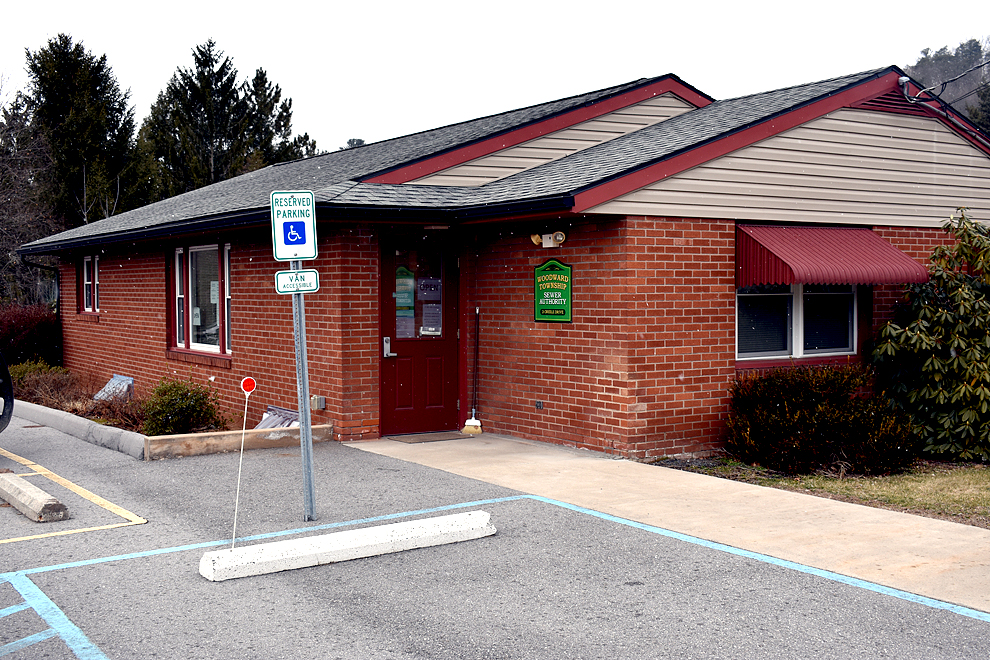 LAURA JAMESON/THE EXPRESS Woodward Township supervisors are continuing discussion about the sale of the former Sewer Authority Building located in a residential area at 21 Oriole Road.

LOCKPORT — Woodward Township supervisors are continuing to weigh their options regarding the possible sale of the former sewer authority building at 21 Oriole Road.

All three supervisors– Kyle Coleman, Wayne Love and John Barth — agree that the sale of the building would benefit the township.

Since the sewer authority was dissolved in early 2019, the building is mainly used for residents to drop off sewer payments.

Coleman was the first to bring up the sale during the final discussion about a proposed fire tax, which was enacted in January.

“We have a sewer house that we’re maintaining for people to drop payments off. It is insane,” Coleman said.

The property was purchased by the now dissolved Woodward Township Sewer Authority in 2013 for $138,000 to base its operations.

So far about $225,000 has been invested in the former residence to turn it into an office building with parkling lot. The cost to maintain the building monthly is estimated at $258, he said.

Many of the residents in attendance at that Jan. 20 meeting agreed with Coleman.

At this week’s meeting on Tuesday night, the supervisors debated on how to go about the sale and where to put the equipment and paperwork stored at the building.

Coleman said the township could hold their monthly meetings at the Dunnstown Fire Hall, something they’ve done in the past.

“There wouldn’t be any cost to doing that… we wouldn’t have to build an addition or rearrange things,” he said.

The supervisors plan to sit down with members of the fire company including Brenda Fetzer who handles reservations at the fire hall.

Regarding the sale of the former sewer authority building, Coleman said there are steps that will have to be taken to sell it. “The biggest is we need to see that an appraisal is done,” he said.

Ensuring the building is sold as close to market value as possible will ensure the township gets the most out of the sale, he continued.

Due to the sale expected to be over $6,000, Coleman said the township will have to put it out to bid.

“We can reserve the right to reject the bids or set a minimum bid on it. That’s something we’ll decide down the road,” he said.

The supervisors will meet for their regular monthly meeting on March 17 at 7 p.m. in the township building at 86 Riverside Terrace.

In other business the supervisors:

— Discussed the Croak Hollow paving project which is being funded through a PennDOT multimodal grant. So far Saar’s Tree Trimming has begun trimming back low hanging branches and removing dead trees along the roadway from its intersection with Route 664 up to Farrandsville Road. The supervisors also discussed gathering bids for the installation of pipes under the roadway.

— Announced they are waiting for quotes from Pine Creek Township for berm work.

“They’re looking at doing berm work for us on some of our outlying roads,” Coleman said. “They have the equipment to do a decent amount of road mileage compared to the equipment we have.”

— Discussed purchasing a skid steer to replace the township’s approximately 40-year-old grader. The proposed plan is to purchase a skid steer that can have a grader attachment, Coleman said.

“Right now we’re just still shopping around and checking some prices,” he said.

— Discussed hiring a third person to work between the sewer department and road crew. The supervisors agreed to sit down and outline the work the third employee could due within 2020 to ensure it would benefit the township.