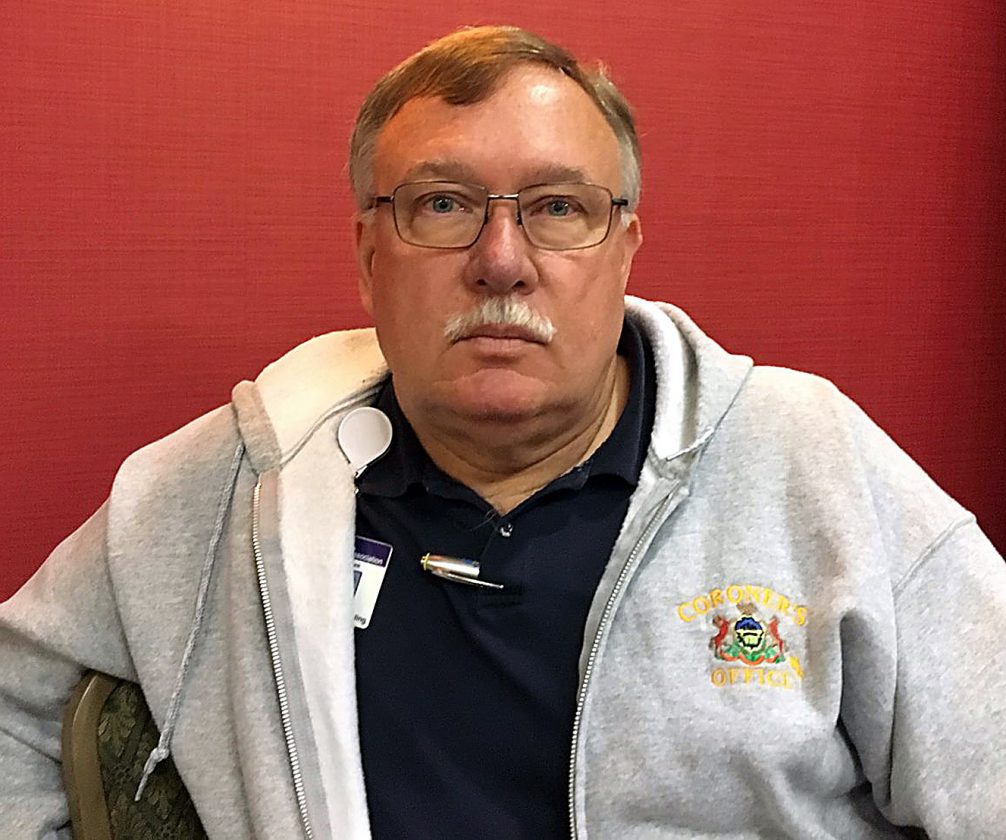 PITTSBURG –Armstrong County Coroner Brian Myers caused a stir this past week when, in a Sunday night rant he posted on Facebook, he accused the state of posting “untruths and misleading statistics” about COVID-19 death figures for his county.

Even though the state had corrected the problem — reducing the number of COVID-19 deaths in his county from six to two on its daily report — before he posted his concerns, he hinted at some ulterior reason for the state’s error.

“As to their motives behind inflating the numbers, I haven’t a clue,” he wrote.

His post went viral — or at least as viral as a coroner’s post from a county with a 72,000 population can — and quickly served as a Rosetta stone for various conspiracy theories about the COVID-19 pandemic and how the state and hospitals and politicians generally are handling the crisis.

As of Friday, his post had been shared more than 7,000 times and had generated nearly 1,000 comments, including from at least one other coroner.

“Thanks for speaking up Brian. I feel your frustration,” Westmoreland County Coroner Ken Bacha wrote in a comment that was “liked” or “loved” 150 times. “The Coroner’s and Medical Examiners in PA have reported data for all deaths based on what county the death actually occurred. This includes opiate deaths, violet [sic] deaths, etc. And now, for some reason, the DOH are counting the deaths by where the deceased lived and NOT where they died. Very misleading, incosistant [sic] and inaccurate.”

The state says there is no ulterior motive. It’s only trying to post daily death data on COVID-19 that is as accurate, and helpful, as it can get.

State Department of Health spokesman Nate Wardle wrote in an email answer to questions that counting peoples’ deaths by the county of their official residence — and not necessarily where they died — is something that the state has always done, and for good reasons.

“County of death will present an inaccurate picture of mortality by county due to the fact that the majority of deaths occur in hospitals and some counties have more hospitals than other counties, meaning that residents of one county may live their entire life in one county but die in a hospital in another county,” he wrote.

“Presenting deaths by county of residence presents a more balanced picture of disease burden,” he wrote.

The confusion among coroners and others who see ulterior motives in how the state is reporting death data has its roots in a decision the state made at the beginning of the pandemic in March.

Back then, the state decided that it wanted all of the state’s death certifiers — primarily coroners, funeral directors, medical examiners and doctors — to start using the state’s first ever Electronic Death Registration System, or EDRS, to file death information.

The state had been working on developing the system for five years as a way to “simplify” reporting, which has been a hodgepodge of methods by different death certifiers, including many who were still faxing in paper death records.

The state’s web page for EDRS says that is is still “implementing” the phase-in of its operation, having concluded phase 1 by getting all coroners, medical examiners and funeral directors up to speed, and that it will eventually get medical-related certifiers online “at a future date.”

It turned out that future date was the beginning of the pandemic, and coroners say not only doctors, but some coroners and funeral directors were not ready, and few medical offices had even been trained in how it worked.

Lycoming County Coroner Chuck Kiessling, president of the Pennsylvania State Coroners Association, said the problem with the EDRS system is that because so many medical offices were not trained on the system ” it is cumbersome for them.”

Kiessling said he has heard doctors complain that they don’t have time to watch a bunch of training videos the state offered them in lieu of in-person training.

“The doctors barely have time to complete a death certificate. It’s just not realistic for the Department of Health to do this this way,” he said. “It’s all well and good to mandate it, but your numbers are never going to be accurate” until everyone is trained on its use.

The state also declared in March that it would not take any more paper records for deaths because everyone who certifies deaths has to use EDRS.

However, “some doctors and funeral home directors refused to use EDRS,” Kiessling said, and are still sending in paper records, and state employees have to type those into the system anyway.

“They’ve made exceptions to get them into the system,” he said.

At the same time, to get the quickest information on COVID-19 deaths, the state also was using a separate reporting system to track infectious diseases known as that National Electronic Disease Surveillance System or NEDSS, the same system that tracks other infectious diseases including the flu.

That system takes in all lab test results, which is the starting point for a COVID-19 case. Once someone dies, the state would match that up with the case that was begun on NEDSS, which would only have the location of where the person died typically.

When the state switched to EDRS, some of those nursing home deaths were switched to another county because that’s where a person’s official residence was. Beaver County, for example, saw its county death count drop overnight from 83 to 70 cases, presumably because at least 13 of the 76 people who lived at Brighton Rehabilitation and Wellness Center — the nursing home with the state’s worst outbreak — had official residences in other counties.

NEDSS would have also listed a hospital or a doctor’s office as the location of a death, Mr. Wardle noted, but “we would find out the actual residence during our case investigation,” which was not necessarily the case with nursing homes because that could be a residence.

This week the state started reporting nursing home deaths two different ways, as a result of the switch to the EDRS system.

That switch of counting nursing home deaths two ways may have helped explain why Mr. Myers’ county count two weeks ago jumped to six from the two cases of COVID-19 deaths he knew about in Armstrong County.

In the state’s release of data on nursing homes, it revealed that Parker Personal Care home in Armstrong County had anywhere from one to four deaths (the state does not reveal an exact number for a nursing or personal care home unless there are five or more deaths). Those residents who died at Parker may have had official residences outside the county, like the nursing home residents in Beaver County.

The state has said that it is not double-counting deaths — a criticism from some — and seeks to avoid that, something Myers said he agrees with.

“I’m not saying they are” double-counting, he said. “There was never proof that that was happening.”

And though his Facebook post made some people believe he was fanning the conspiracy of purposely inflated numbers by the state, or some move by hospitals to get paid more for COVID-19 deaths, he insists that was never his goal.

“Nobody is fudging the numbers,” he said. “No hospitals are doing it for funding. That’s not happening.”

The whole series of comments dismayed him enough, he said, that, “that’s probably why I’ll never post anything on Facebook again.”

The state last week began an effort to respond to coroners’ request to have a hand in providing more accurate information by offering to let them access the same data they are using on EDRS for COVID-19 deaths. Kiessling thinks is it smart to let coroners play a “check and balance” role for the state’s data.

“Of course, if they had followed my lead two months ago and let the coroners take the lead [in death reporting on COVID-19 cases] we wouldn’t be in this mess,” he said. “If they’d had all of death certifiers report to the coroners, we’d have all the demographic information, where they died, how they died, and it would be more accurate.”