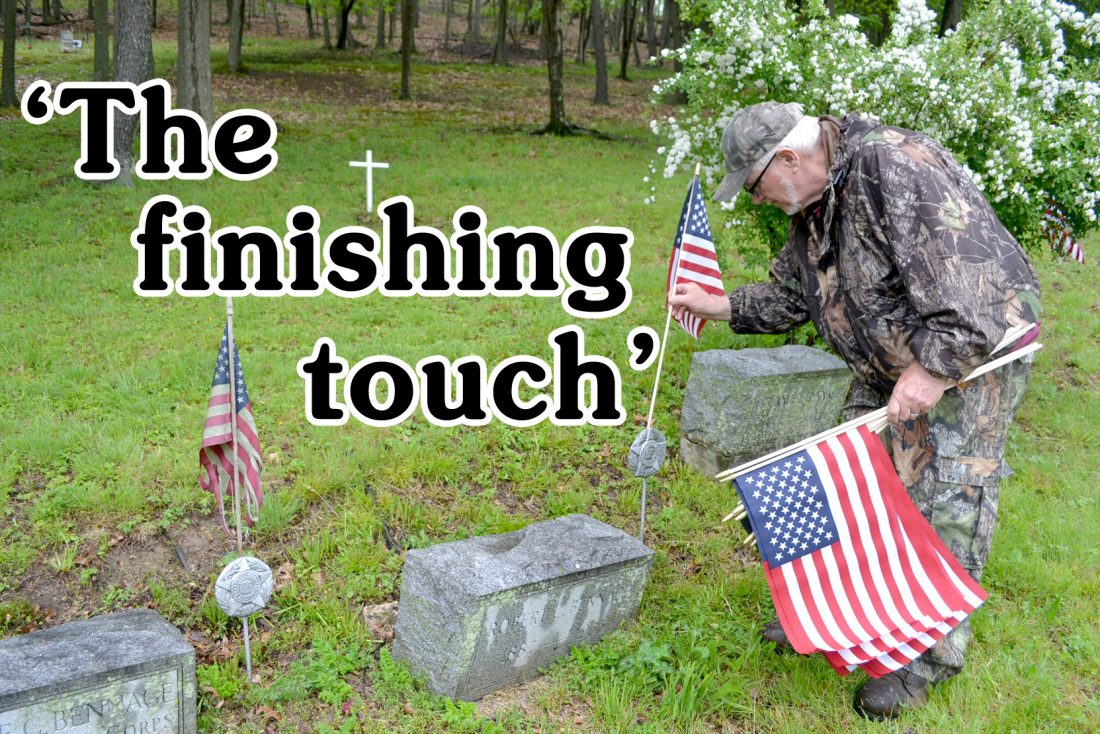 LANA MUTHLER/THE EXPRESS Probst places a new, crisp, red, white and blue American flag on a veteran’s grave, replacing an old tattered one like the one at left.

LOCK HAVEN — It’s been almost five years since John Probst went looking for the final resting place of his grandparents and other relatives.

He soon found a little cemetery, but finding the burial plots of family members among the fallen trees, overgrown bushes and weeds, broken tomb stones and sunken graves was certainly not what he expected.

He was saddened by what he found and determined to do something about it.

The Castanea man has spent hundreds of hours and much of his own money trimming, pruning, mowing, pulling out stumps, repairing and cleaning tomb stones and turning the once hidden and forgotten graveyard into a cemetery he’s proud of.

Each year, he digs a little deeper into the clean-up. 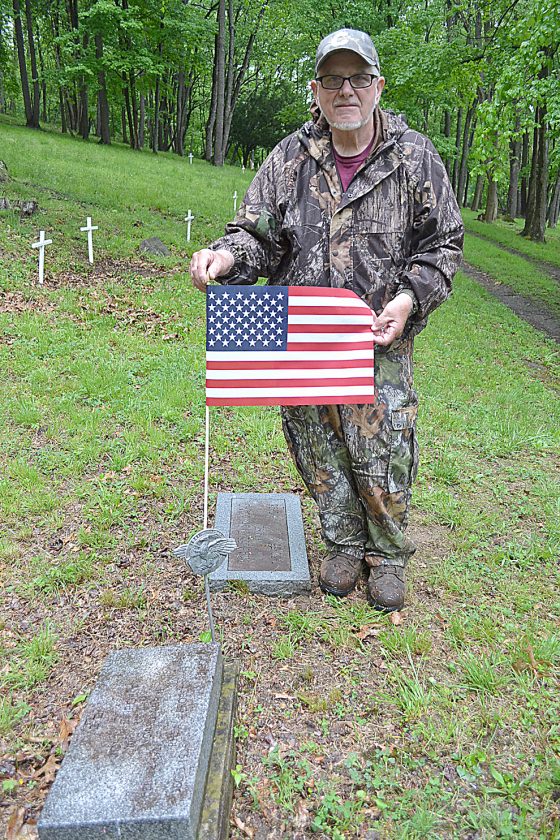 This year, John made and painted little white wooden crosses and placed one on each of the graves he found.

Many graves don’t even have tomb stones and are sunken into the ground, but because of John, each one has a beautiful cross as a marker that somebody is resting peacefully there.

And last Friday afternoon John put the finishing touch on the revamped cemetery just in time for Memorial Day, as he placed brand new red, white and blue American flags on each of the veterans’ graves to honor those who served in the U.S. military.

As he walked from grave to grave, he took time to look at the names and dates of those buried there, often commenting on what he had done to bring dignity to the final resting places of the deceased.

“No cemetery should have looked like this one did,” he said.

And then he stopped in a squared off area where his family is buried. His uncle John Probst built a stone wall that mark’s the family’s plot.

“I was named after him,” John said with a big smile. “I was supposed to be Roger, but I was born on his birthday, Feb. 24, so I was named John,” he explained, looking closely at the words on the marker.

“Uncle John died in 1985,” he said, as he removed the dirty, torn and worn out American flag from the holder on his uncle’s grave and placed a bright new one there. He straightened the flag so it would wave in the wind, and then moved on, a bundle of flags held under his arm, and put new flags on graves of other veterans in the cemetery.

As John looked around at the white crosses and crisp flags throughout the cemetery, he admired his work and is proud of what the once hidden and unsightly cemetery has become.

But he’s not finished yet.

He points to a tree stump over yonder that needs to be pulled out. He says he might plant a few flowering bushes somewhere and add some lights to the sign at the entrance. And of course the regular mowing, weeding and pruning continues.

“As long as I can do it, I’m going to keep working up here. It’s something I can do and it makes me feel good doing it,” he said, bending down to place another American flag in the holder atop an American hero’s grave. 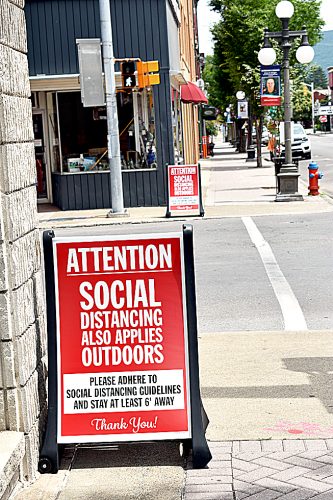