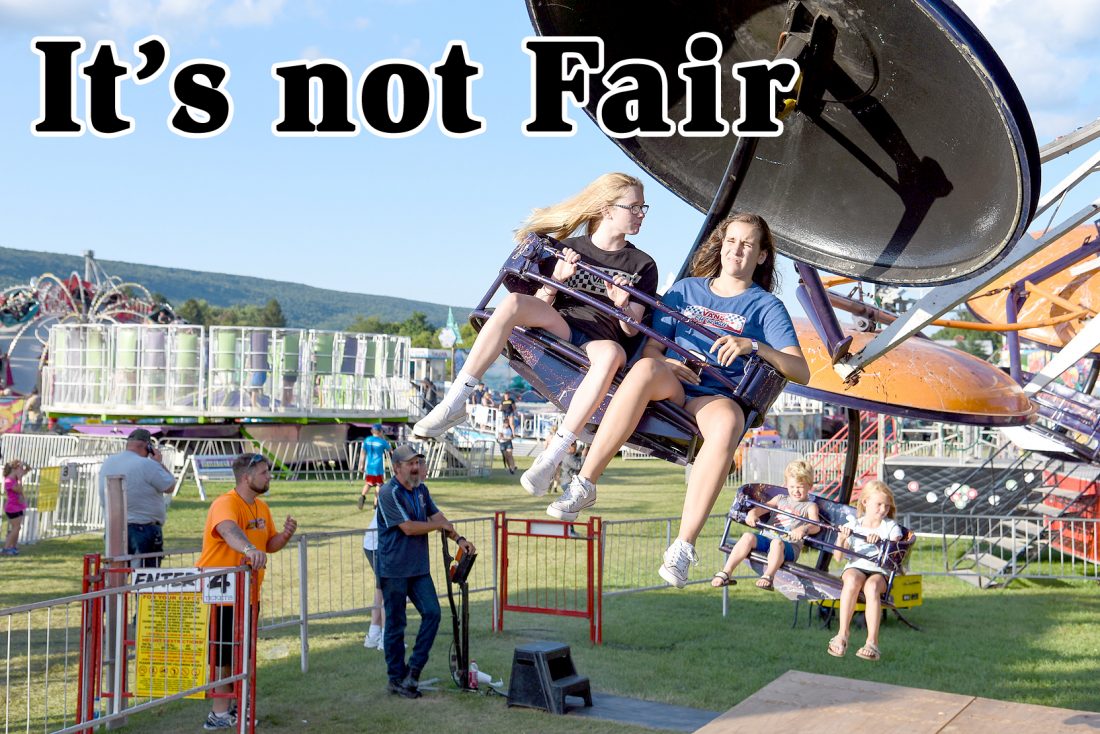 TIM WEIGHT/FOR THE EXPRESS A pair of fairgoers take a spin on one of the many rides at the 145th Centre County Grange and Encampment Fair in 2019. On Wednesday, the fair committee announced that the 2020 fair has been canceled due to the COVID-19 pandemic.

CENTRE HALL — Don’t get those tents out of storage. You won’t need them for the Grange Fair — it has been canceled.

While many other Centre County fairs and festivals had already been canceled due to the COVID-19 pandemic, organizers of the Centre County Grange Encampment and Fair were holding out hope that the fair could be held in late August.

Those hopes were dashed on Wednesday night when the fair committee announced on Facebook that the fair was being canceled “with great sadness.”

“The health and safety of our tenting and RV families, fairgoers, staff, concessionaires, sponsors, entertainers and others is of utmost importance,” Ben Haagen, Grange Fair Committee president, said in the post. “It is clear to us, the Grange Fair Committee, that we would be unable to adhere to the CDC mandates of social distancing protocols at this time. Thank you for your understanding and patience during these unprecedented times. We look forward to seeing everyone at the 2021 Grange Fair!”

The Grange Fair was scheduled for Aug. 21 through Aug. 29 in Centre Hall. It would have been the 146th edition of the Grange Fair.

According to its website, the Grange Fair draws 200,000 visitors each year over the course of nine days. The Grange Fair is Pennsylvania’s largest fair in terms of acreage at 264. It also hosts 1,500 RVs and 1,000 tents for the families who stay for the duration. That is a tradition passed down from generation to generation.

Tussey Mountain’s WingFest, which is held weekly in July and part of August, has not been canceled yet. Additionally, the State College Spikes baseball team has not announced its plans for the upcoming season, which is scheduled to start in mid-June. However, professional sports throughout the country are on hold for now.

Penn State football is scheduled to start in September with games at Beaver Stadium, though the NCAA has not announced its plans for fall sports.