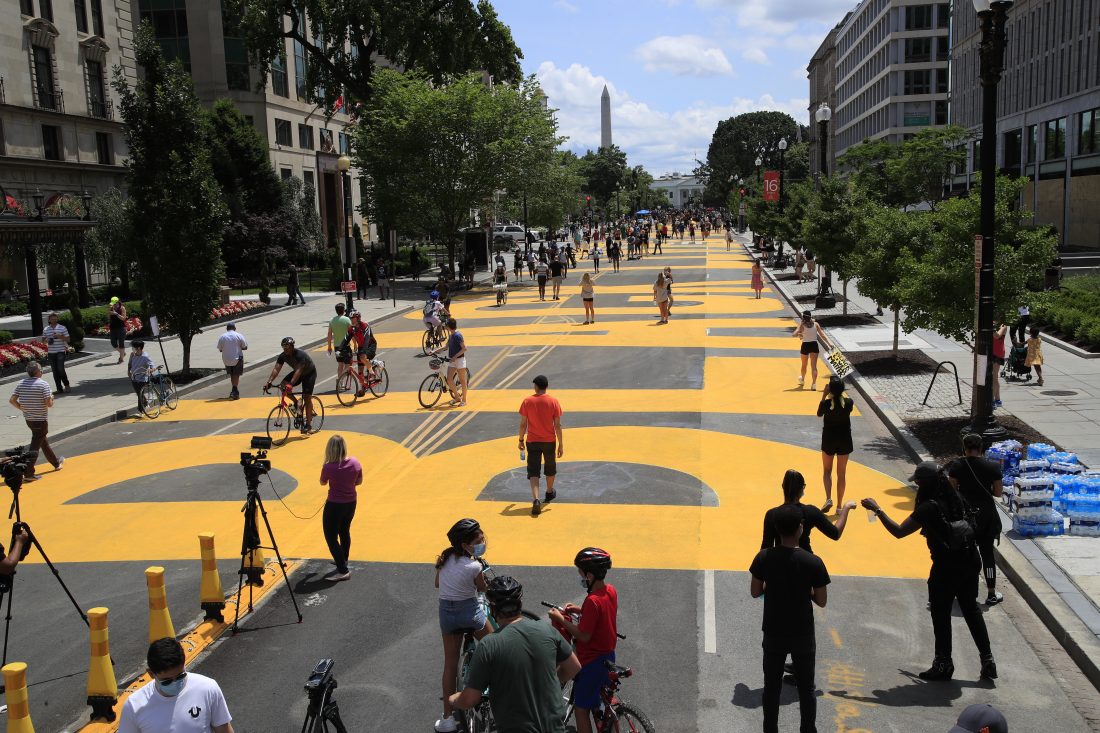 AP Photo/Manuel Balce Ceneta With the Washington Monument in the background people walk on the street leading to the White House after the words Black Lives Matter were painted on it by city workers and activists Friday, June 5, in Washington.

WASHINGTON (AP) — Protesters stirred by the death of George Floyd vowed Friday to turn an extraordinary outpouring of grief into a sustained movement as demonstrations shifted to a calmer, but no less determined, focus on addressing racial injustice.

In Minneapolis, where Floyd died in police custody, the city agreed to ban police chokeholds and require officers to intervene any time they see unauthorized force by another officer. The changes are part of a stipulation between the city and state officials who launched a civil rights investigation into Floyd’s death. The City Council was expected to approve the agreement, which will be enforceable in court, later Friday.

By early afternoon, demonstrations resumed for an 11th day around the country with continued momentum as the mood of the protests largely shifted from explosive anger to more peaceful calls for change. Despite the change in tone, the country’s most significant demonstrations in a half-century — rivaling those during the civil rights and Vietnam War eras — showed no signs of dissipating. Formal and impromptu memorials to Floyd stretched from Minneapolis to North Carolina, where family were gathering Saturday to mourn him, and beyond.

Josiah Roebuck, a Kennesaw State University student and organizer of a demonstration that drew about 100 people Friday in an Atlanta suburb, said he was confident that momentum will be maintained.

“Once you start, you’re going to see this every day,” said Roebuck, who has attended multiple other Atlanta-area protests. “I just want minorities to be represented properly.”

Demonstration leaders have employed various organizing tools including social media, which Roebuck said he used to gather people for the demonstration outside a Kennesaw store selling Confederate memorabilia. “Social media is a big influencer today,” he said.

Protests around the country had initially been marred by the setting of fires and smashing of windows, but Friday marked at least the third day of more subdued demonstrations, including a heartfelt tribute to Floyd in Minneapolis that drew family members, celebrities, politicians and civil rights advocates on Thursday. The Rev. Al Sharpton delivered a fierce eulogy and outlined plans for a commemorative march on Washington in August, vowing that the movement will “change the whole system of justice.”

Floyd’s body was being taken to North Carolina, the state where he was born 46 years ago, for a public viewing and private service for family on Saturday. Then in Texas, where Floyd lived most of his life, services culminating in a private burial will take place over two days next week.

In Washington, city workers and volunteers painted “Black Lives Matter” in enormous yellow letters on the street leading to the White House in a sign of local leaders’ embrace of the protest movement. The mural that also includes an image of the city’s flag stretched across 16th Street for two blocks, ending just before the church where President Donald Trump staged a photo-op earlier this week after federal officers forcibly cleared a peaceful demonstration to make way for the president and his entourage.

“The section of 16th street in front of the White House is now officially ‘Black Lives Matter Plaza,'” Mayor Muriel Bowser said in a tweet shortly after the mural was completed Friday.

The project supporting a protest movement at odds with Trump’s leadership follows Bower’s verbal clashes with his administration over the response to protests over Floyd’s killing. Still, the local chapter of Black Lives Matter took a swipe at Bowers on Twitter by saying the project distracts from their efforts to shift funds from local police to community investment.

Meanwhile, in a sign the protesters’ voices were being heard, more symbols of slavery and the Confederacy came down. Alabama’s port city of Mobile removed a statue of a Confederate naval officer early Friday after days of protests there, while Fredericksburg, Virginia, removed a 176-year-old slave auction block from downtown after several years of efforts by the NAACP.

Community activists are working to convert anger and grief into long-term action. Black Lives Matter Alliance Broward circulated a sign-up sheet at a Fort Lauderdale, Florida, protest that drew 1,500 names of people who want to stay involved. The group followed up with each person this week suggesting simple actions such as emailing or calling to demand local change.

“We are taking more of the strategy of: ‘How do we actually invest people’s energy beyond protesting?,'” said Tifanny Burks, a community organizer. “We are thinking long term.”

This weekend, they are building a church altar with the names of victims killed by local police and having their family members speak. On Monday, they plan a workshop to help people engage at the local level, including mobilizing in upcoming elections.

“Every single day it’s growing from people who want to get more involved, who want to take more actions, so we’re going to be mobilizing those folks,” Burks said.

At demonstrations around the country, protesters said the quieter mood was the result of factors including the new and upgraded criminal charges against the officers involved in Floyd’s death and a more conciliatory approach by police who have marched with them or taken a knee to recognize their message.

Still, some troubling interactions between police and protesters occurred. In Buffalo, two officers were suspended after video from WBFO showed a 75-year-old man being shoved after walking up to police as they were enforcing a curfew Thursday night. The man appeared to hit his head on the pavement and was bleeding as officers walked past. The man was hospitalized.