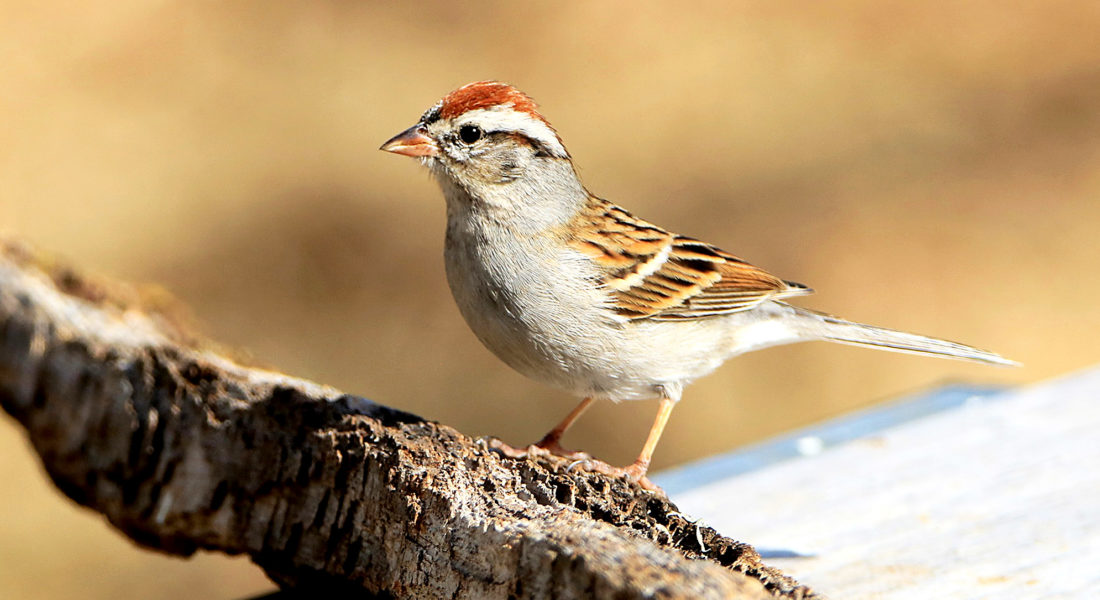 The chipping sparrow (Spizella passerina) is one of the most common summer birds in Pennsylvania. It is smaller than most other sparrows weighing less than half an ounce with a 8.5 inch wingspan.

Chipping sparrows forage on the ground in dry areas with short grass. They are tolerant of humans and are common to see on lawns and similar areas. They also are common in woodland edge habitat. The chipping sparrow’s main diet is seeds. They often feed in small flocks. They nest low to the ground in bushes and trees, usually preferring conifers. Their song is a long trill that can sound insect-like. It sounds more dry and less musical than the trills of the pine warbler or dark-eyed junco. A tiny bird singing a long trill from an electrical wire in the summer is probably a chipping sparrow.

Chipping sparrows are widespread across the United States and Canada in the summer. They migrate to the southern United States and Mexico for the winter. They are in Pennsylvania from late-March through early-November.

Chipping sparrows nest across Pennsylvania. The Second Atlas of Breeding Birds in Pennsylvania estimated nearly 3 million singing male chipping sparrows statewide. This ranks it as the second most numerous nesting bird species in the state behind only the song sparrow.

Chipping sparrows are identified by their bright rufous cap and black eye line. They have completely black bills. The underside of adults is plain white and the wings and back have an intricate brown pattern. In the winter, chipping sparrows have similar patterning but are less boldly colored. Juveniles have a streaked breast in the summer but replace those feathers to look like adults by early fall.

The field sparrow is another common summer sparrow that is plain underneath but it has a pink bill, an orange cap, and no eye line. The song sparrow has a streaked breast and lacks any red coloration. The American tree sparrow looks similar to the chipping sparrow but is only in Pennsylvania in the winter. It has a black and yellow bicolored bill and the cap is a different shade of red.

Many beginners find sparrows difficult to identify because some species look similar, but the chipping sparrow is a good one to learn. The small size and distinctive head pattern make them easy to recognize plus they are common and tend to feed out in the open. As you enjoy some time outside this summer see if you can spot a chipping sparrow foraging in a grassy area or hear one singing a trill from an elevated perch.

David Brown is a member of the Lycoming County Audubon Society.

To your good health: Interstitial cystitis drug can affect the macula in the eye