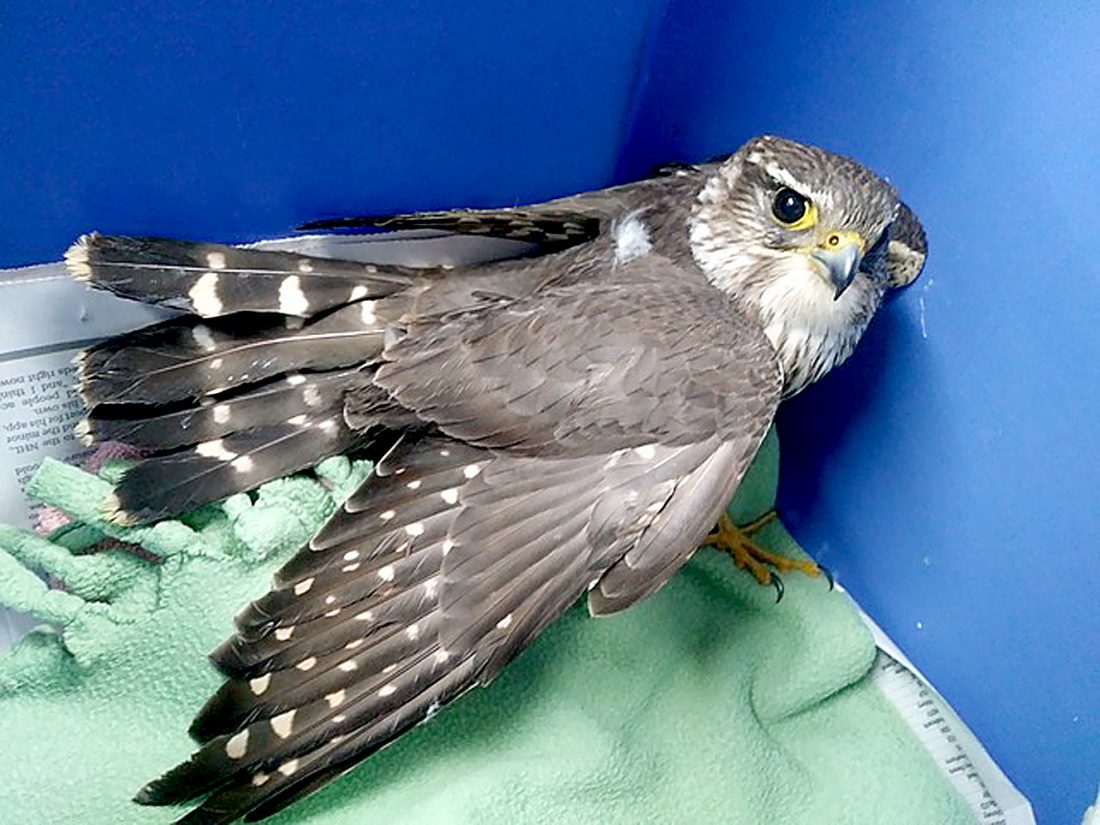 PHOTO by Gary Metzger The merlin as it arrived at Centre Wildlife Care.

On a snowy morning this past January, Officer Seth Stropp of the South Williamsport Police Department received a call for assistance. A longtime resident reported that she had found a bird with its wing outstretched laying in the snow on the road. Officer Stropp responded and they were able to put the bird in a box since it couldn’t fly. His next step involved contacting Wildlife in Need (WIN). This new organization provides capture and transport services for sick and injured wildlife throughout Pennsylvania. Since the bird was already contained, WIN contacted three local Lycoming Audubon volunteer transporters and the bird was shuttled to Centre Wildlife Care (a licensed wildlife rehabilitation center) in Port Matilda. Within hours of the initial call, this very lucky bird was receiving much needed medical care. Had good samaritans not responded, this bird almost certainly would have starved and died of exposure.

Upon arrival at Centre Wildlife Care, the bird was examined and determined to be a merlin. It had some blood on its beak and a probable head injury but no broken bones. The wing appeared to be bruised as well. The merlin was given pain medication and antibiotics. It was also tube fed and hydrated as birds that are hurting often don’t eat. After several days being housed and treated in the warm clinic, it improved enough to eat on its own. Then it was acclimated to an outdoor flight pen so it could readjust to outdoor temperatures and redevelop its flight muscles in preparation for release. It is always Centre Wildlife Care’s goal to release wildlife back to the wild when possible.

On a much warmer recent March morning , the merlin was released close to where it had been found. Robyn Groboski, Executive Director and Founder of Centre Wildlife Care opened her carrying crate near the future Sylvan Dell Nature Park. Standing by were a number of the people (myself included) who played a part in the bird’s rescue. The merlin wasted no time once the crate was opened. With a few strong wing beats, it was aloft and landed high above us in a nearby tree. It watched us and we watched it for some time as it acclimated to the new surroundings. It seemed in no hurry to leave despite the days of confinement. Seeing that bird take flight was a special gift to all involved.

Merlins are one of three types of falcons found in Pennsylvania. They are the “middle sized falcons” (being 10-14 inches from head to tail) with peregrines being larger and kestrels being smaller. All falcons, including merlins are known for their speed and acrobatics in the air. Merlins mostly feed on small birds and large insects (especially dragonflies), capturing them in mid air often from the side or from below. They typically spot prey from a tree and close on that prey with incredible speeds and abrupt turns. A typical flight speed is 30 mph with faster bursts during pursuits. These birds are stocky and angular with relatively short broad wings and an overall dark appearance with heavy streaking. Merlins usually use nests built by other birds such as crows and hawks. They like to nest on the edge of forest with unobstructed area views. They usually do not return to the same site the next year but find a new place to nest. Merlins are monogamous during the mating season but 80% find new mates from year to year as well. Magnificent flight displays are part of their courtship. Outside of the breeding season, merlins are often solitary. Populations of this species appear to be stable although they are not an “easy find” for local birders. Any nesting or siting of a merlin in our area is enthusiastically celebrated by birders.

Many people who come upon sick or injured wildlife have compassion for the animal and want to help …but don’t know what to do. If you are in that situation call the 24/7 dispatch for Wildlife in Need (WIN) at 877-239-2097. WIN will then contact a licensed and trained “capture” person for your particular county who accesses the situation to protect both the public and the wild animal. WIN also coordinates the transport and reception of the animal to a wildlife rehabilitation center. Almost all of these services offered to wildlife — capture, transport and rehabilitation — are provided by volunteers.

I have loved wildlife from afar forever. As a Lycoming Audubon Society volunteer with WIN, I get to love wildlife up close as well. I can not tell you how gratifying this volunteer work has been for me. Each and every rescue is a chance to make a positive difference both for the individual animals and for conservation. If you want to help injured and sick wildlife too, there are many ways to do that. WIN is recruiting and training capture and transport volunteers throughout the state and would love to hear from you. You can inquire about WIN via email at sdearment@windstream.net. If you live near Port Matilda and want to help Centre Wildlife Care in rehabilitation, you can inquire through their website www.centrewildlifecare.org or by calling 814-692-0004. Both WIN and Centre Wildlife Care are dependent on donations to continue their work and do appreciate any and all contributions.

Written by Joan Sattler, a long standing board member of Lycoming Audubon Society.