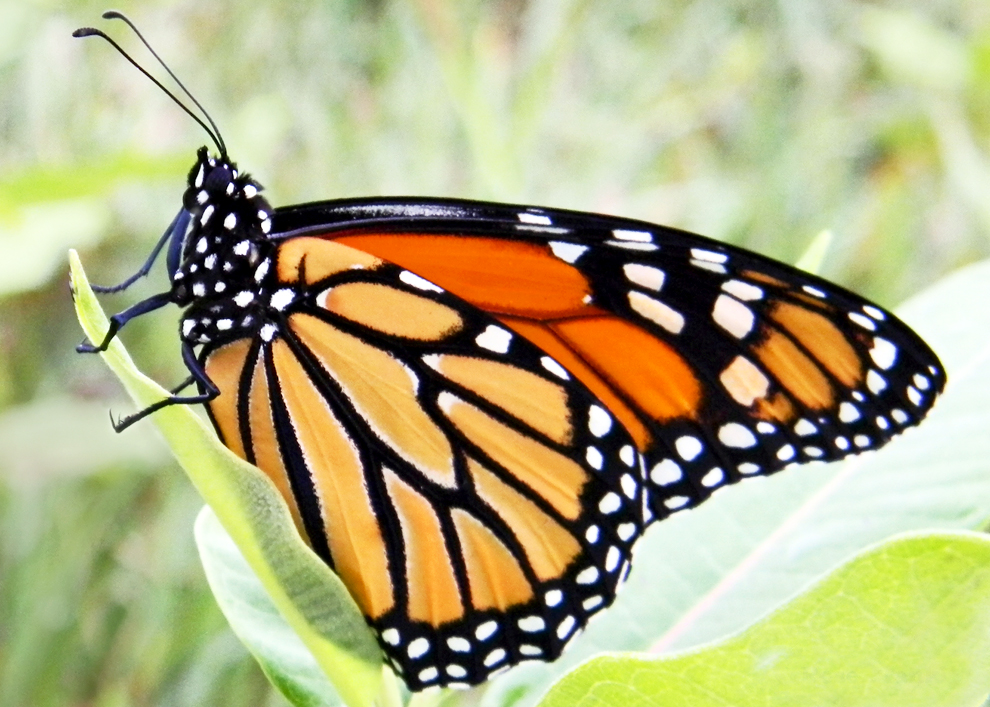 It doesn’t take much to satisfy the wants and needs of butterflies. They need warmth, food, and a place to lay their eggs.

Monarch butterflies especially like the nectar produced by butterfly bushes (Buddleia), purple coneflowers (Echinacea), Joe-Pye Weed (Eupatorium), phlox (especially Phlox ‘ Jeana’), and zinnia. Some people claim that butterflies prefer pink, red, and purple flowers while others proclaim that white, yellow, and orange ones lure them to the garden. I think that flower color doesn’t matter at all. It’s the sugar concentration of the nectar that really matters.

Female monarchs lay their eggs on milkweed (Asclepias), this because milkweed is the only plant their caterpillars are able to digest. Remove a monarch caterpillar from milkweed and it will die.

Some people know of just one milkweed, the one that used to grow abundantly among rows of corn and along country roads. Actually there are many species of milkweed and most of them are utilized by monarchs for egg-laying. Milkweed contains a milky sap containing toxic compounds called cardenolides. Once the cardenolides are consumed by monarch caterpillars the caterpillars are toxic to birds. Eating a monarch caterpillar won’t kill a bird but the bird will become violently ill, sick enough that it won’t likely eat another yellow, black, and white striped caterpillar.

Tropical Milkweed (Asclepias curassavica) is a native of Mexico and northern South America. Its sap contains a higher concentration of cardenolides which makes it more toxic than most of the U.S. natives. Female monarchs can sense this and thus, will generally lay more eggs on tropical milkweed than on U.S. natives so long as tropical is among the choices offered for egg-laying. Tropical Milkweed must be treated as an annual in most of the U.S. It blooms profusely all summer long and even into early October, generally provides nectar for migrating monarchs. 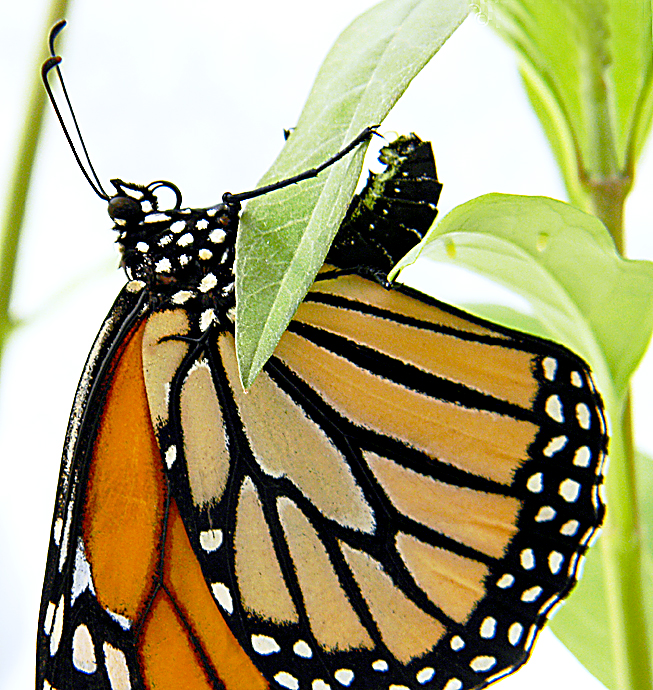 ROSE FRANKLIN PHOTO A monarch butterfly lays an egg on a leaf.

Monarchs, like all butterflies, have a four-stage life cycle: egg, larva (caterpillar), pupa (chrysalis), and adult. During their summer breeding season, they are only adults (known as being “on the wing”) for a period of just two to three weeks. During adulthood their major role is that of reproduction, contributing to the survival of the species.

A female monarch often lays about 50 eggs per day but those 50 eggs will not produce 50 adult monarchs. Most, about 98% in fact, will be consumed by predators or taken by disease. For every one hundred butterfly eggs laid, only two will likely survive long enough to produce an adult. Monarch eggs are consumed by ants, wasps, and spiders. Caterpillars are eaten by numerous insects, rodents, reptiles, and amphibians.

Butterfly gardeners can’t create an outdoor predator- and disease-free environment for monarchs but they can design a habitat that furnishes nectar for adult monarchs and food for baby monarchs, caterpillars. All it takes to create a monarch haven is a butterfly bush, some purple coneflowers and/or zinnias, and milkweed.

Rose Franklin resides in Spring Mills with her husband, Andrew Smith. Both enjoy butterfly gardening, butterfly photography, and raising butterflies. Rose is the author of Fast Track Butterfly Gardening and also the proprietor of Monarchs-And-Milkweed.com.