AP Photo/Gregory Bull Waves glow with blue bioluminescence from an algae bloom in the ocean waters as a lifeguard tower sits on a beach still closed in efforts to slow the spread of the coronavirus Monday, April 27, in Del Mar, Calif.

AP Photo/Sarah Blake Morgan In this Thursday, April 16 photo, U.S. Army Major Brian Minietta records a weekly Facebook message outside the headquarters of the 3rd Special Forces Group at Fort Bragg, N.C. Since the start of the coronavirus pandemic, the Group Chaplain has used social media to minister to the Green Berets he serves.

Deb Edwards/The Commercial-News via AP In this April 2 photo, Lara Danzl, Vermilion County Conservation District environmental educator, and her husband Rick Danzl make a video for kids on Facebook in Danville, Ill. Lara is holding a salamander for this video.

AP Photo/Nati Harnik, File In this April 18, 2019 file photo, John Love of Pacific Junction, Iowa, stands in flood water to wash the muck off of his golf clubs which were in a flooded shed.

CHRIS MORELLI/THE EXPRESS Jason Floruss of Lock Haven and Ron Dreibelbis of Centre Hall work in the Pro Shop at Belles Springs Golf Course on Friday afternoon. Floruss and Dreibelbis said they were “extremely busy” and completely books with tee times open to close on the first day of golf season in Pennsylvania. The start of the season was delayed by the COVID-19 pandemic.

PHOTO PROVIDED Just for fun, and since we’re missing baseball this spring, here’s a photo from our archives of the 1898 baseball team.

AP Photo/Altaf Qadri Rajpath, India’s ceremonial boulevard is deserted, as India’s Presidential Palace is seen during a lockdown amid concerns over the spread of Coronavirus, in New Delhi, India, April 27.

An Indian Muslim man prays in a Mosque during the nationwide lockdown to prevent the spread of new coronavirus in Gauhati, India, Monday, April 27, 2020. The U.S. Commission on International Religious Freedom is urging that the State Department add India to its list of nations with uniquely poor records on protecting freedom to worship, while proposing to remove Sudan and Uzbekistan from that list. (AP Photo/Anupam Nath)

AP Photo/Dmitri Lovetsky Winter Palace and the Alexander Column are reflected in a puddle after rain at the Palace Square in St. Petersburg, Russia, Monday, April 27.

PHOTO PROVIDED Tommy Galentine is turning 6 today and is finding a way to do something charitable during the virus pandemic.

Recently, my wife and I have been combining two of our favorite outdoor activities – birding and running. We run at our favorite birding hotspots, eyes-wide and ears perked, and stop only when we see or hear something interesting. We coined it “bird running” and it has been a welcome escape from our work-from-home routine during the shut-down.

After a few weeks of bird running, I did some research on the subject. Turns out we are late to the party. According to Google, it is called “Run-Birding” and it is a recognized trend. I like our name better, but I will defer to the Internet.

How can you become a Run-Birder? If you are a runner, take out those earbuds and start listening to nature’s sound-track and observed the world as it swooshes past you. If you are a birder, ditch the jeans for some athletic gear and pick up the pace. Run-Birding can be skewed to either side of the bird-run spectrum. Burn a few extra calories, or take in a little extra of what mother nature has to show off. It’s your choice.

As a veteran bird runner, er, Run-Birder, I can say with certainty there are three rules to the sport, as discussed below. A caveat, however — these rules have not been formally adopted by the National Run-Birding Institute, so use sparingly (Note: if you are on the Board of or employed by the National Run-Birding Institute, I apologize for making your organization into a punchline – I did not know you existed. I’m sorry. Also, consider changing your name. Email me for a suggestion)

Rule Number 1: Calling a stop. If you are running in a group, and someone calls STOP, everyone must stop. It is up to the caller to justify the stop to the group by spotting an interesting bird. Maybe a Belted Kingfisher swooping down from tree, or a Ruby-Throated Hummingbird buzzing by. If the call turns out to be a usual like an American Robin or, worse, an overweight bumble bee, the caller loses six points. 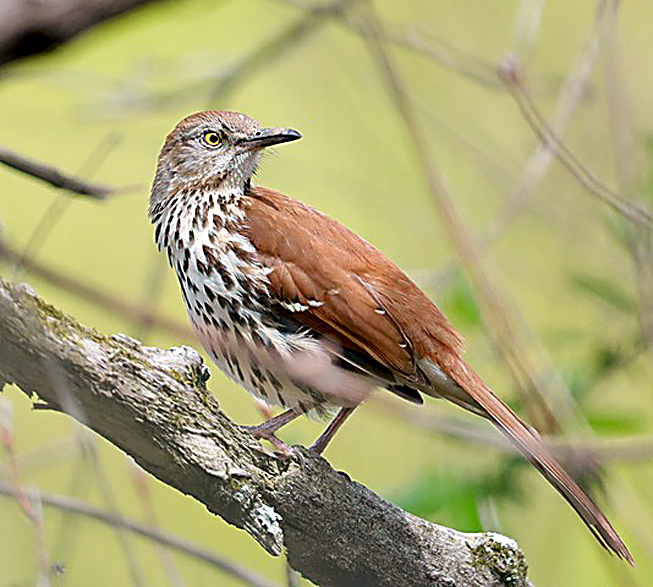 Rule Number 2: Bring the right gear. While optics are welcome in the world of Run-Birding, they carry a serious penalty: weight. Run-Birding with a full-frame digital SLR and a 600mm lens is not recommended. It will weigh you down and you will probably break something or someone. A small monocular is a better choice. There are many small and light monoculars on the market. Opt for one with a hand-strap and you will barely notice it is there.

Rule Number 3: Recognize limitations of the sport. Compared to traditional birding, Run-Birding is loud and draws attention. Keep Run-Birding on the streets and other places where noise and motion can be expected. These issues can also affect the Run-Birding group, providing an advantage to the Run-Birders in the lead. The most successful Run-Birders stick close together so everyone has an equal shot at calling a stop.

My wife and I follow these rules and employ a strategy similar to our traditional birding: she is the eyes and I am the ears. My heart beating at 160 bpm has no effect on my keen sense of hearing. But my vision is poor, and even worse when trees are flashing by. My wife is the opposite – she could spot a Ruby-crowned Kinglet from 50 yards out, and at an eight-minute mile pace (she’s probably hearing the same things I hear, but she doesn’t say anything so I feel useful. Thanks, Liz)

OK. Back to that four-minute mile thing.

Here’s the rub. I am campaigning for a Rule Number 4 to be introduced into Run-Birding (crazy, I know!). In this proposed rule, a Run-Birder will earn a 15-second deduction from their run time for each unique bird species spotted during the run. This could be the great equalizer of Run-Birding. An expert birder who runs a leisurely twelve-minute mile pace could run a four-minute mile if he/she spots 32 birds during a one-mile run!

Yes, that would be extremely difficult for even an expert birder. But running a four-minute mile is a task accomplished by only the most elite runners in the world. The key is in striking a balance.

But remember — the faster you run, the harder it is to spot birds. That is the Run-Birders’ dilemma.

Austin White is a Director at Large with the Lycoming Audubon Society and an attorney in Williamsport.

BIRD LORE is produced by the Lycoming Audubon Society (serving Lycoming and Clinton Counties) and Seven Mountains Audubon (serving Union, Snyder, Northumberland and Columbia Counties). Information about these National Audubon Society chapters can be found at http://lycomingaudubon.blogspot.com and http://sevenmountainsaudubon.org