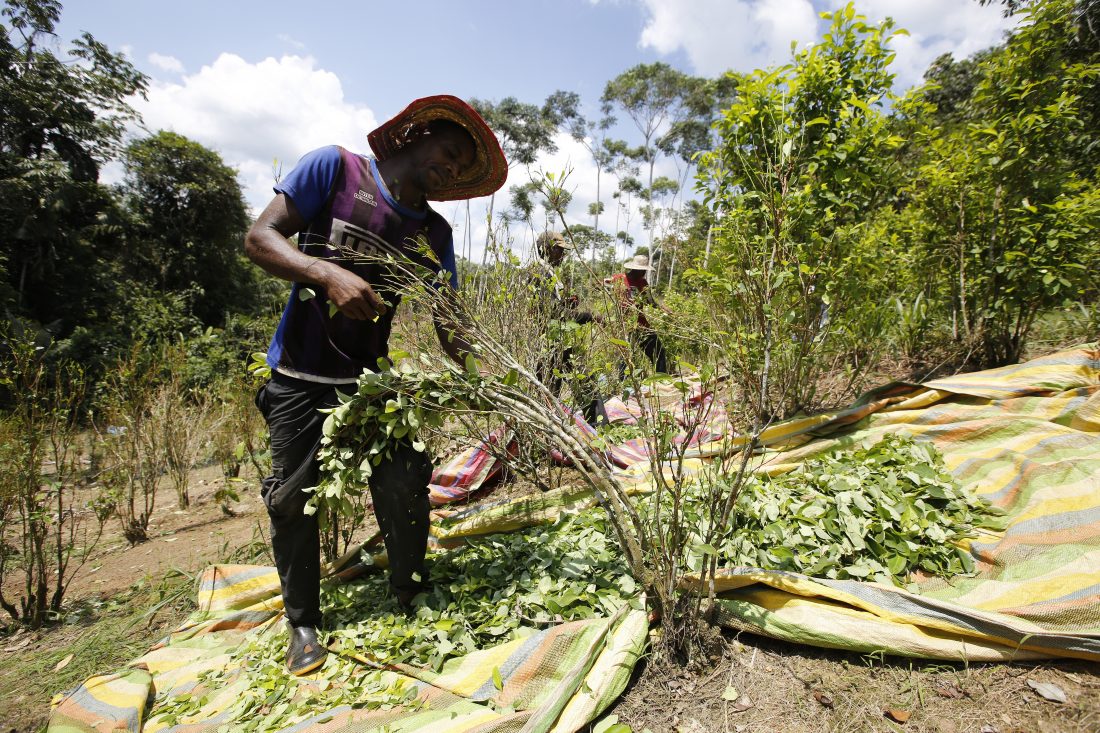 AP Photo/Fernando Vergara, File In this 2017 photo, a peasant harvests coca leaves in Puerto Bello, in the southern Colombia's state of Putumayo.

BOGOTA, Colombia — The amount of land devoted to growing the plant used to make cocaine dropped in Colombia last year as the military embarked on a campaign to pull out thousands of the coca shrubs that have stood as a stubborn thorn in the nation’s history.

That’s according to a new report by the United Nations Office on Drugs and Crime released Wednesday that found the total area devoted to growing coca crops dropped 9% in 2019 to 154,000 hectares (380,500 acres).

The news hailed by Colombia’s government was tempered by a less encouraging finding: Actual production of cocaine saw a slight uptick, reaching one of the highest levels seen in recent years despite record breaking drug seizures.

The mixed findings in the middle of the coronavirus pandemic suggest short-term eradication efforts have made a mark but drug groups have simultaneously improved production and cultivation techniques. In several traditional hot spots coca cultivation declined, but production persists in conflictive border regions, natural reserves and other vulnerable areas without a strong institutional presence.

“Those enclaves explain why there is more cocaine, even though there are less hectares of coca,” said Pierre Lapaque, the U.N. drug agency’s Colombia representative. “And they are the reason for the violence and insecurity in those territories.”

In recent years Colombia had seen a surge in coca production, putting a strain on traditionally close relations with the United States and challenging the country’s ability to bring peace to rural areas where violent illegal armed groups still control territory despite a 2016 accord ending conflict with the nation’s largest rebel army.

A White House report earlier this year said coca cultivation in Colombia had remained at record high levels in 2019. That study relied more heavily on data collected earlier in the year, meaning it might not have fully accounted for the flurry of eradication that took place in later months.

The pandemic may throw yet another wrench in Colombia’s quest to root out coca.

Though soldiers have continued manually eradicating, there has been a delay in the expected resumption this year of aerial spraying seen as a critical component of the nation’s counter-narcotics strategy. Environmental consultations with affected communities — many of them in remote areas — have ground to a halt.

The Trump administration has been pressuring Colombia to restart aerial spraying, which was banned in 2015 over health and environmental concerns.

“If you don’t spray, you’re not gonna get rid of them,” Trump said earlier this year.

The U.N. findings showing a decline in coca cultivation even without the use of aerial spraying suggests progress can be made without it, several analysts said. When launched, the new program is expected to be smaller and more targeted.

“This does take off some of the urgency to start aerially fumigating,” said Adam Isacson, a Colombia expert at the Washington Office on Latin America.

Colombia’s historic peace process has fueled a parallel debate over how best to get rid of the nation’s title as the world’s biggest cocaine producer. The 300-page agreement calls for improving life in the long-neglected countryside and encouraging peasants to substitute alternatives like cacao for their coca crops.

President Ivan Duque, who ran on a campaign promising to reform parts of the agreement, has made limited progress in those areas. Of the 101,000 hectares of coca eradicated last year, only about 7,000 were through voluntary substitution. No new families were added to the program, which has nearly 100,000 enrolled. Data shows that just 0.4% went back to planting coca after removing their illicit crops.

Juan Carlos Garzon, a drug policy expert at Colombia’s Ideas for Peace Foundation, said that while families are getting financial support, there are few alternative production projects to help their transition be sustainable long term.

“Eradicating is a short-term solution,” he said. “The question is what to do long term.”

Overall, there was three times as much coca in Colombia last year as in 2013, the year with the lowest figures on record. At least 124,600 households had some involvement in coca production, the U.N. report estimates.

The pandemic appears to be having some impact on how drug trafficking is taking place.

Illegal groups are believed to have exported large quantities toward the U.S. and Europe before strict lockdowns went into effect, cutting off some air and land routes. The gangs now appear to be relying more heavily on marine transit. Some reports suggest that the price of coca has dropped and that traffickers are also buying less, relying more on exporting cocaine stored before the pandemic.

“They are very good at adapting,” Garzon said. “They try to maintain the flow.”

The report came on the same day that six soldiers were killed in an ambush by dissidents from the former Revolutionary Armed Forces of Colombia in Meta, an area where rebels and drug trafficking have persisted.

“They died confronting drug trafficking, protecting our forests,” Duque said. “The reduction we’re seeing today is the work of these heroes.”