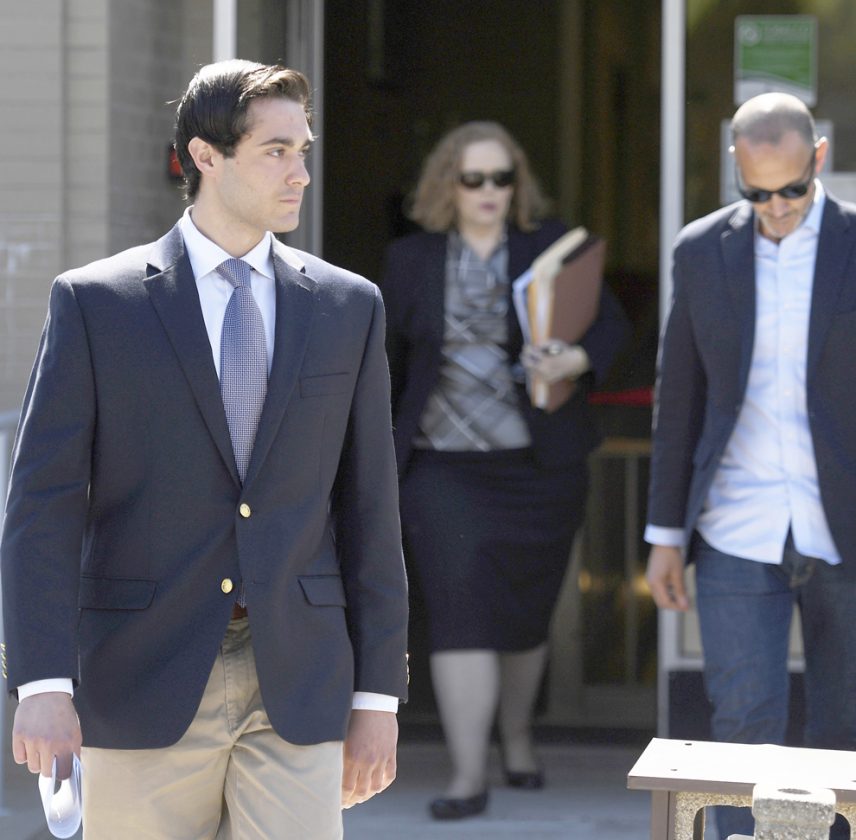 Phoebe Sheehan/Centre Daily Times via AP Braxton Becker leaves the Centre County Courthouse after the preliminary arraignment in Bellefonte. Becker was the house manager of a Penn State fraternity where a pledge fell during a night of hazing and drinking and later died.

BELLEFONTE, Pa. (AP) — The former house manager of a now-defunct Penn State fraternity where a pledge fell during a night of hazing and drinking and later died has been placed on two years’ probation on a hindering apprehension conviction.

Braxton Becker, 23, of Niskayuna, New York was also ordered to pay a $5,000 fine and do 100 hours of community service on the conviction stemming from the February 2017 death of 19-year-old Timothy Piazza of Lebanon, New Jersey.

Piazza consumed a large quantity of alcohol the night of a pledge bid acceptance ceremony at the Beta Theta Pi house. His agonizing night was captured on the house’s extensive system of security cameras, but footage from the basement was not initially provided to investigators. Becker was accused of deleting basement security camera footage to thwart the probe in the days after Piazza’s death from severe head and abdominal injuries.

In May, Becker was convicted of hindering apprehension but acquitted of evidence-tampering and obstruction. His attorney argued either for no further penalty or for any probation term to run concurrent to probation her client is serving on an earlier misdemeanor drug conviction. Becker “has learned a very hard, valuable lesson,” Muir said during Wednesday’s hearing.

Piazza’s death led to passage of a stricter state anti-hazing law. About a dozen members of the shuttered fraternity have pleaded guilty, generally to hazing and alcohol violations, while others entered a diversion program for first-time, nonviolent offenders. Two former brothers still have pending charges but their cases are on hold while a pretrial issue is being appealed.

Vehicle hits buggy LOGANTON — Erica T. Baney, 24, of Loganton, was charged with careless driving after she ...

From Pennlive STATE COLLEGE — A Penn State student’s death is under investigation, a university spokesperson ...

LOCK HAVEN — The following calls were dispatched by the Clinton County Communication Center. FRIDAY — At ...

LOCK HAVEN — The information in Courthouse Roundup is obtained from public records. It is policy of The Express ...