Prosecution was declined in the case, police said in their report.

LAMAR — On Jan. 7, the driver of a 2015 Freightliner was left uninjured following a large vehicle crash along Interstate 80 near mile marker 173, Porter Township, Clinton County.

According to a report by state police at Lamar, Zakaria Issack, 42, of Columbus, Ohio, was traveling east on the roadway and failed to maintain control of his vehicle, causing him to cross over the center line, through the left lane of travel, and exited off of the north side of the roadway.

Upon exiting the roadway, Issack’s front driver’s portion of his vehicle struck the north guide rail and continued to travel east, crossing back through the left and right lane before exiting off of the south side of the roadway, striking a guide rail with his front passenger side, police said in their report.

Issack was able to steer the vehicle back onto the roadway where it continued east for twenty yards before coming to a final rest in the right lane facing east.

BEECH CREEK — A 57-year-old Beech Creek man reported to state police at Lamar of a firearm that was stolen from his Harrison Street residence between Dec. 28 and Dec. 29, 2021.

The firearm, a Hi-Point 9mm carbine rifle valued at $150, has since been recovered and charges are pending based on suspect interviews, state police said.

LAMAR — On Dec. 28, a Gettysburg man was caught stealing $35.95 worth of Christmas decorations from the lobby of a hotel on Hospitality Lane in Lamar.

Matthew Heck was interviewed after state police at Lamar conducted an investigation.

LAMAR — Two New York men were arrested on Dec. 28 for possession and intent to deliver or manufacture of drugs after state police at Lamar conducted a traffic stop of a Toyota Corolla rental along Interstate 80 in Lamar.

State police at Lamar said through the traffic stop, there were indicators of illegal activity with the occupants, Simon Davies, 27, of Brooklyn, and Grant Monohon, 37, of Manhattan. State police asked the two men to consent to a search of their vehicle to which they denied.

A search warrant was applied for and granted by District Judge Mills, state police said.

Through the vehicle search, police found 5.5 ounces of marijuana and other related paraphernalia inside of the vehicle.

MADISONBURG — On Jan. 5, state police at Rockview had successfully served a felony warrant on a 20-year-old man, of Madisonburg at Madisonburg Pike and Mustang Aly in Miles Township.

HOWARD — Griffons Restaurant at 11053 North Eagle Valley Road in Liberty Township was a victim of theft after a suspect stole a cup of ice cream valued at $5.

The ice cream was stolen sometime between Dec. 19 and Dec. 21 2021, state police at Rockview said in their report. 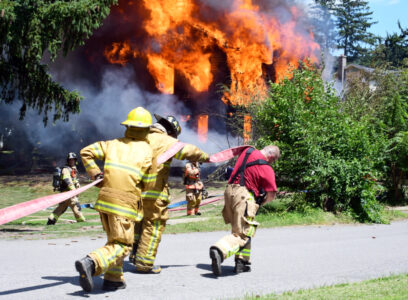 (Editor’s Note: The Clinton County Court of Common Please schedule listed below is not in its entirety. The ...

Fatal crash RENOVO — State police at Lamar investigated a fatal crash that took place on May 8 along Renovo ...

Harassment PLEASANT GAP — A Pleasant Gap teen was cited for harassment following an investigation by state ...

LOCK HAVEN — The following calls were dispatched by the Clinton County Communications Center: TUESDAY — At ...

BPW Students of the Month honored in Jersey Shore