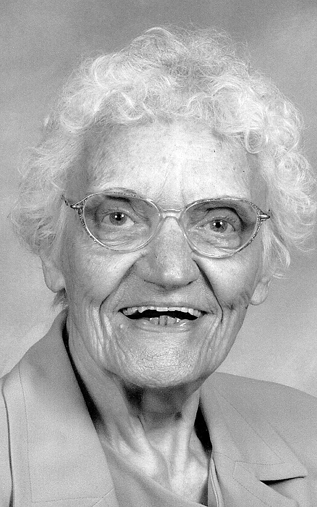 She was born in South Renovo on July 24, 1920, the daughter of the late John Levi and Edith A. Herrold Haas.

Clara was a 1939 graduate of Renovo High School.

Clara was employed at Kohler’s Dairy Store of Renovo, Sylvania Electric in both Emporium and Mill Hall, the Renovo YMCA, Piper Aircraft in Renovo and the Old Kinsley Inn of Renovo.

Clara found her joy in singing and attending church. She was a life member of the First United Methodist Church of Renovo where she participated in the choir from her teenage years until present time. She was also a founding member of the Renovo Community Choir, a member of the United Methodist Women and served as the Chaplain for the National Society Daughters of the American Revolution. In addition, Clara served on the Chapman Township Election Board for many years.

In addition to her parents and husband, she was preceded in death by four siblings, Evaline, Helen and John Haas, and Edith “Maxine” Eckel.

A funeral service will be held on Sunday, Nov. 10, 2019 at 1:30 p.m. at the First United Methodist Church of Renovo, 127 7th Street, Renovo, Pa. 17764 with Pastor John Baney officiating. Private burial will follow at North Bend Cemetery.

Friends and family will be received at the church on Sunday from 1 p.m. until the time of the service.

In lieu of flowers, memorial contributions may be made through the funeral home to the First United Methodist Church of Renovo or Bucktail Medical Center.